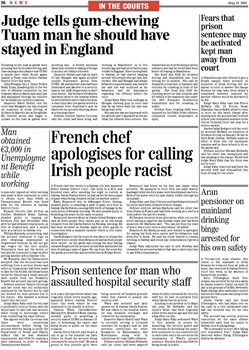 Judge tells gum-chewing Tuam man he should have stayed in England
Urinating on the road as gardai were arresting him for drunken driving, and then causing a disturbance near UCHG a month later while drunk again, landed a Tuam man before Galway District Court this week. John Mongan (21), 2, Upper Dublin Road, Tuam, pleaded guilty to the two sets of offences committed on two separate dates in March and April last and apologised through his solicitor for his behaviour on both occasions. Inspector Marie Skehill told the court that Mongan's car was stopped on suspicion of drink driving at 11.30pm on March 6 last at Doughiska. He resisted arrest and began to urinate on the road as gardai were arresting him. A breath specimen taken later showed a reading of 66 mgs of alcohol per 100mls of breath. Inspector Skehill said that on April 23 last Mongan was again arrested outside Supermac's, across from UCHG. He and another man had been intoxicated and abusive to a security man at the A&E Department a short time earlier. Garda David Delahunty had been called to the hospital where he directed both men to leave the area. A short time later the garda received a complaint from Supermac's and he observed the accused shouting abuse at a doorman there. Defence solicitor Valerie Corcoran said her client had been living and working in Manchester up to five months ago and had never been in any trouble in England. Since moving back to Galway he had started hanging around with people who got him into trouble. She said Mongan had always behaved in a gentlemanly way towards her and she was surprised at his behaviour and his demeanour regarding the offences before the court. Judge Mary Fahy took umbrage at Mongan chewing gum in court and that he sat down while his case was being dealt with. She said she was not impressed with his attitude and it appeared he did not think the offences were serious. She warned him he could be facing a prison sentence and that he would have been better off staying in Manchester. She fined him 300 for drunken driving and disqualified him from driving for 12 months. She said he displayed a total lack of manners and courtesy by urinating in front of the gardai. She fined him 300 for resisting arrest on that occasion and 5 (which is the maximum fine under the 1871 Summary Jurisdiction Amendment Act) for urinating in public. Further fines totalling 600 were imposed for the Public Order offences committed outside Supermac's in April.

Fears that prison sentence may be activated kept man away from court
A Shantalla man who refused to give a breath sample when arrested on suspicion of drink driving did not appear in court to answer the charge because he may have been afraid a suspended sentence imposed for another offence would be activated if he did. Judge Mary Fahy said that Pierce McNally (29), 18 Fursey Road, Shantalla, was probably afraid to come to court on this latest charge after hearing how the accused had received a three-year suspended sentence in the Circuit Criminal Court last year for a serious assault. Garda Cathal Rodgers told the court he arrested McNally on suspicion of drunken driving on January 29 last at Dock Road, Galway. McNally made no effort to blow into the intoxilyser machine and he then refused to do so, the garda said. Defence solicitor Michael McDarby said his client was unemployed and was pleading to the charge. He advised Judge Mary Fahy that his client was not in court. Judge Fahy convicted and fined the accused 400 and disqualified him from driving for two years.

Man obtained 3,000 in Unemployme nt Benefit while working
A man who `signed on' while working and made a false statement in order to obtain more than 3000 in Unemployment Benefit was fined 800 for the offences at Galway District Court. Ricardo Corvelo (29), 68 Dun na Coiribe, Headford Road, Galway, pleaded guilty to `signing on' between July and December 2003, after he had obtained employment, at first in Oughterard, and a month later at a factory in Galway city. William Kennedy, prosecuting, said the accused continued to sign on after obtaining employment in Oughterard because he did not get any wages for the first month. Temptation then got the better or him and he continued to sign on after getting another job in Galway City. Mr Kennedy said the Department accepted that the accused was now suffering from a serious illness and while no repayments had been made to date for the 3,000, the Department would be deducting a small amount each month from the Disability Benefit the accused was now getting. Defence solicitor Valerie Corcoran said her client was still technically employed by the factory but he had not worked for nine months due to his illness. She handed a medical report into the court. Judge Mary Fahy said Corvelo had a potentially serious illness and she would have to take that into account while trying to discourage others from committing the same offence. She agreed with Ms Corcoran that these were exceptional circumstances before fining the accused 300 for failing to notify the Department of Social and Family Affairs that he had obtained employment, and 500 for making a false statement in order to obtain Unemployment Benefit.

French chef apologises for calling Irish people racist
A French chef who works in a Galway city pub, appeared before Galway District Court this week in a dirty and bloodied state, after spending the night in custody at Galway Garda Station where he had earlier broken a pane of glass while being released on bail on another matter. Kadir Benyoucef (24), 14 Abbeygate Street, Galway, pleaded guilty to smashing a pane of glass on a door at Galway Garda Station, causing 200 worth of damage in the early hours of Monday morning. He also pleaded guilty to breaching the peace on the same occasion. Benyoucef shouted abuse at Garda Cathal Rodgers and said all Irish people were racists just as he was being released from the Garda Station on Monday morning. He had been arrested on Sunday night by other gardai in connection with a separate incident which is still under investigation. Garda Rodgers told the court he was about to release the accused from custody when Benyoucef said all Irish people were racists. As the garda was closing the door having released Benyoucef the accused turned back and kicked the door, breaking a pane of glass. He ran from the scene but the garda pursued him and arrested him at Bridge Street. Benyoucef had blood on his face and hands when arrested. He appeared in court with one hand heavily bandaged while his dirty jeans were bloodstained and torn. Both of his knees were cut and clearly visible through his torn jeans. Judge Fahy said that if the accused had behaved himself he would have been released without charge. Defence solicitor Adrian MacLynn said his client was from Nimes in France and had been working as a chef in a local pub for the last five weeks. He became involved in an altercation while out on the street having a cigarette last Sunday night and had been assaulted, Mr MacLynn said. "You can see from the state of him it was a very serious altercation," he added. Benyoucef, Mr MacLynn said, now wished to apologise for saying the Irish were racists and his behaviour had been due to drink. He said his client wanted to remain working in Galway and would pay compensation if given a chance. Judge Fahy adjourned the case to next Monday and remanded the accused on bail to that date to allow him time to pay 200 compensation.

Aran pensioner on mainland drinking binge arrested for his own safety
A 70-years-old Aran islander who comes to the mainland to drink because he is barred from all pubs at home, was convicted at Galway District Court this week, in his absence, of being drunk in public. Rory O'Donoghue, Inish Oirr, Arainn, was arrested for his own safety by Garda Annette Clarke on April 25 last in the grounds of UCHG, Newcastle Road, Galway, after ambulance control alerted her that a man was lying on the ground there. Garda Clarke said she found O'Donoghue, who had fallen over on the road, in a very intoxicated state and she arrested him for his own safety. The accused has several previous convictions for the same offence committed each time he comes to Galway on a drinking binge. "He is normally in court after falling over somewhere first," Judge Fahy observed before fining O'Donoghue 100 in his absence.

Prison sentence for man who assaulted hospital security staff
A 21-years-old man whose father was tragically killed seven months ago, appeared before Galway District Court this week where he was sentenced to six months in prison. Charles Ward, Carrowbrowne Halting Site, Headford Road, Galway, pleaded guilty to assaulting a security man at UCHG on January 23 last, to breaching the peace, and being drunk in public on the same occasion. Garda Gerry Carroll said he got a call to go to the hospital car park where he found the accused being restrained by security staff. He and a group of four juvenile girls were being escorted off hospital grounds when they started to assault the security staff. Ward was arrested and later passed out at Galway Garda Station. He was taken to the hospital where he was detained overnight and treated for his intoxication. Inspector Marie Skehill said Ward is currently serving a 12-month sentence for burglary and he had previous convictions for other burglaries in Ballyshannon and Roscommon along with 11 convictions for road traffic offences. Defence solicitor Michael McDarby said his client had been angered when forcibly restrained by security staff but he had co-operated fully when Garda Carroll arrived. Alluding to an incident in Co Mayo last year, Mr McDarby said his client's father had been tragically killed seven months ago and this had a big effect on him. Judge Mary Fahy sentenced Ward to four months in prison for assaulting the security guard and two months for breaching the peace, both sentences to run consecutively to each other and to be served on the termination of Ward's present sentence. She also fined him 100 for being drunk in public.