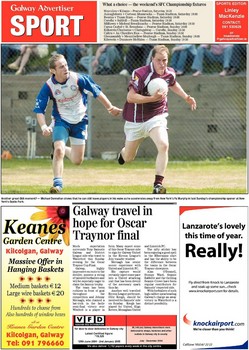 Another great GAA moment? -- Michael Donnellan shows that he can still leave players in his wake as he accelerates away from New York's Pa Murphy in last Sunday's championship opener at New York's Gaelic Park.

Galway travel in hope for Oscar Traynor final
Much expectation surrounds Tony Samuels Galway and District League side who travel to Waterford this Sunday evening for the Oscar Traynor Cup Final. Galway, highly impressive en route to the decider, possess a string of talented footballers and will be especially eager to claim the famous trophy. The team has been ruthless in front of goal throughout the competition and Johnny Mernagh, who claimed a hat-trick in the facile semi-final victory over Wexford is a player in form. Many expect some of this Oscar Traynor side to sign for Galway United in the Eircom League's July transfer window. Mernagh has senior soccer experience with United and Limerick FC. His capture would certainly inject some pace into a United attacking unit that has been devoid of the necessary spark thus far. Another well travelled Eircom League performer, Ollie Keogh, should be involved for Samuels' side on Sunday. Keogh has played for United, Sligo Rovers, Monaghan United and Limerick FC. The nifty attcker has been enjoying a good spell in the Hibernians shirt and has the ability to be the difference between the teams in the Oscar Traynor showpiece. Alan O'Donnell, Stumpy Ward, Seamie Rabbitte and the thrilling Seamie Crowe have been regular contributors for Samuels' respected side. With footballers of such high calibre spearheading Galway's charge an away victory in Waterford is a distinct possibility.

We also deliver 1,152 papers every week in the city centre.