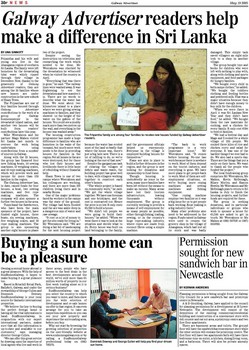 Galway Advertiser readers help make a difference in Sri Lanka
BY UNA SINNOTT Priyantha and his wife and young son live in the Ahangama region of southern Sri Lanka. The family were left homeless by the devastating tidal wave which ripped through their village in December. Now, thanks to the generosity of Galway Advertiser readers, they are among the 22 families whose new homes are under construction in the new suburb of Sham Town. The Priyanthas are one of four families housed through Galway Advertiser contributions to the work of a group of Galway businesspeople in the devastated island nation, and another two houses will be built from readers' contributions later this year. Mike Weerakoon and his partner Mags Mahon visited Sri Lanka last month to oversee the work being undertaken using contributions from a number of sources in Galway. Along with the 22 houses, the group has financed four new fishing boats, 10 sewing machines, 13 weighing scales, and 60 rope making machines, which will provide work and income for more than 150 families in the region. The Galway Advertiser has, to date, raised funds for four houses, a boat, two sewing machines, and five rope making machines. The company will also sponsor a further two houses in the area. Tuam band the Sawdoctors, who have been the main sponsors of the project, have funded eight houses, three boats, six sewing machines, five weighing scales, and 30 rope making machines. The group is also sponsoring another eight houses in phase two of the project. Despite seeing the destruction on television and researching the work which needed to be done, Mr Weerakoon was shocked by the devastation he witnessed when he visited the country in April. "Everything that was there is gone," he said. "The railway lines were washed away. It was frightening to see the devastation and how massive it is. There are no words to describe what the water has done. We went about two kilometres inland to a place where we were giving sewing machines to families, and they showed us the height of the water on the gables of the houses. You could see a muddy mark more than two metres up the wall, and everything in the houses was washed away." The housing construction programme has made a huge difference to families who are homeless in the wake of the tsunami, but much more work needs to be done in providing houses for families in the region. Not all homes in the are were destroyed, but for those who lost their houses and livelihoods there is little hope of rebuilding without financial help. Sham Town is one of two camps where Weerakoon and his colleagues are working, and there are more than 325 children living there and in nearby Boosa. One of the major problems faced by workers in the camps was the state of the ground. The village had been flooded and the are was ankle deep in a dangerous mix of water and raw sewage. "It cost us a lot of money to get the site ready for living in," Mr Weerakoon said. "We are doing a fair bit of landscaping for the next housing project damaged. This simple task saved villagers an eight-mile trek to a shop in another village. The group bought toys and books for children who were left with nothing to play with, along with clothing and sports equipment, and food packages for hungry families. "We bought every child in both camps clothes," he added. "We bought the toddlers clothing and feeding bottles and powdered milk. That was a major situation because they didn't have enough money to buy milk for the children. "When we were there in April it was Sri Lankan New Year and they didn't have food," he added. "We bought them the raw materials for cooking, and a chicken for every family. It only cost 294 to feed 41 families. "We had a festival day and Mags and I cooked for a whole village of 250 people. We cooked three kilos of rice and chicken curry and salad for everyone. It was one of the hardest things I we ever had to do. We also had a sports day. Those are the things that put a smile on their faces. We want to thank all the people who funded the project." The local fundraising group comprises Mr Weerakoon, Ms Mahon, Kevin McDonagh, Hilary Morley, and Eamon Howley. Mr Weerakoon and Mr McDonagh plan to return to Sri Lanka in July to finish the housing projects, and further funds are required for these. The group is seeking donations, and in particular individuals or groups who wish to sponsor a house for 1,500 are asked to get in touch. Mr Weerakoon or Ms Mahon at (091) 567505 or (087) 6110582.

The Priyantha family are among four families to receive new houses funded by Galway Advertiser readers.

because the water has eroded most of the land so badly that where the house was, there's just a big hole now. There is a lot of infilling to do, so we're looking at the cost of that now." Despite the gargantuan task of clearing the villages of debris and waste water, the building project has gone well to date, with villagers working together to construct each other's homes. "The whole project is based on community work," he said. "We got the whole village together. We have one foreman and one bricklayer, and the rest is contracted out. Hence the price is so low. It only costs 1,500 to build a house. "We didn't tell people we were going to build their houses," he added. "When we went there it was to look at the situation and decide what to do. Every house was built on land belonging to the family,

and the government officials helped us enormously. Everyone in the village is employed building houses for themselves." Plans are also in place to build a further 19 houses in the region, and the group is now looking for donations and sponsorship to fund these. Though housing is undoubtedly an issue in the area, many more families have been left without the means to make an income. Many areas have lost their tourism infrastructure, leaving thousands without employment. The group is currently working to provide a means of self-employment for as many people as possible, either through fishing, trading, sewing, or in the country's huge rope-making industry, where ropes are made from coconut fibres using a simple machine.

"The back to work programme is a very important issue," Mr Weerakoon said. "It comes before housing. No-one has work because there is nowhere to work. Most of them depend on the tourist industry, and everything is gone. We have more plans to get people back to work. Most of them are selfemployment situations, so we're buying more roping machines and sewing machines and fishing equipment. "One roping machine employs two families so it was a big issue for us to get people back working. Rope making is a big industry there." Many other problems also need to be addressed in the region. Funds raised in Galway were used to reopen the grocery shop in the village of Ahangama, which had lost all its stock and was badly

Buying a sun home can be a pleasure
Owning a second home abroad is a great pleasure. With the help of SunHomesGalway, it hopes to make buying it a great pleasure too. Based in Briarhill Retail Park, Ballybrit, Galway, and under the stewardship of George Cullen and Dominick Downey SunHomesGalway is your local source for fantastic international properties. "We believe the key to buying the perfect foreign home is having all the vital information to hand. SunHomesGalway, in conjunction with our expert international partners, makes sure that all this information is up-to-date and available to our customers," says managing director George Cullen. "We can offer this great service by drawing upon the expertise of local agents who live and work in these areas, people who have access to the best deals in the best developments around the world, we've sold more than 1 million worth of property in our first week trading alone so it is serious business" SunHomesGalway can help you select the country to which you want to move, and then show you the wide selection of development and re-sale homes on offer in that region. It can even arrange for you to take an inspection expedition so you can see your new property and experience the surrounding area, before you buy. Why not start by browsing the growing selection of properties on the user-friendly website at www.sunhomesgalway.com or by calling a SunHomesGalway professional today on (091) 705270.

Permission sought for new sandwich bar in Newcastle
BY KERNAN ANDREWS Planning permission is being sought from the Galway City Council for a new sandwich bar and print/copy centre in Newcastle. A & D Goulding, Galway, have applied to the council for planning permission for a development at 25 Lower Newcastle. The development will consist of the demolition of the existing commercial/residential building and construction of a convenience store with deli counter and eat out area, a print/copy centre and two first floor apartments. There are basement areas and toilets. The ground floor will have the sandwich bar/convenience store while the other section will contain the print/copy centre. The first floor will have two apartments both will have three bedrooms (one en suite), a kitchen, dining/living room, and a bathroom. There will also be private amenity spaces.

Dominick Downey and George Cullen will help you find your dream sun home.