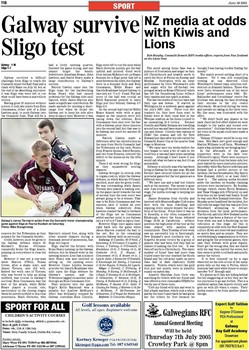 Galway survive Sligo test
Galway 1-10 Sligo 1-7
Galway survived a difficult challenge from Sligo to reach the Connacht minor football final and a clash with Mayo on July 10, but at the end of an absorbing encounter it was Sligo who were left to rue what could have been a marvellous victory. Having gone 25 minutes without a score, it took late points from Eoin Concannon, either side of a John Lawless goal, to push Galway into the Connacht final. That will be a had a lively opening quarter, finished the game strong, and one cannot forget the bench. Substitutes Jonathan Keane, John Lawless, and David Neary made a large contribution to Galway's success. Patrick Cawley came into the Sligo team for the hardworking Brian Neary who had caused problems for the Galway side until injured, while Jason Marren also made a significant contribution. He made amends for missing a shortrange free when he found the Galway net to keep his side alive deep in injury time. However it was Sligo were left to rue the miss when Mark Gottsche quickly got the ball upfield and pointed. Good work from Adrian McIntyre set up Shane Stenson for a Sligo point that left a point between the sides, but Galway were in a buoyant form and Eoin Concannon, Eddie Hoare and Gareth Bradshaw helped Galway to race into a 0 - 7 to 0 - 2 lead. The last score of the half was crucial as Keith Raymond pointed to leave Sligo just four behind, Galway 0-7 Sligo 0-3. As the second half started Eddie Hoare blazed wide with a goal chance as the umpires were still racing down the sideline. Eoin Concannon then shot over the bar with a Galway point three minutes into the second half, but that was to be Galway last score for another 25 minutes. Patrick Cawley made a difference after his introduction as the men from North Connacht had the Tribesmen on the rack. Points from Francis Quinn, David Rooney, and two from Stenson, reduced the deficit to the minimum by the 12th minute. Then it all went wrong for Sligo as they squandered scoring chances. Galway brought in several subs to regain control, while the Galway defence, in which Kieran O'Connor excelled, must also be given credit. He was outstanding while James Tierney also played a leading role. As the game raced towards the end of normal time the next score was always going to be a winner. That was to be Eoin Concannon and two minutes later it looked all over when Galway substitute John Lawless crashed the ball to the back of the Sligo net as Concannon added another point to put Galway into a 1-10 to 0-7 lead in injury time. However Sligo once again came right back into the game when Jason Marren crashed the ball to the net. But in the remaining minutes Galway held on nervously. Galway: E Costello; M O'Neill, J Keaveney, K O'Connor; C Leyden, T Crowe, J Tierney; G O'Donnell, G Bradshaw (0-2); C Kenny (0-1), M Gottsche (0-1), D Hogan; E Concannon (0-5), E Hoare (0-1), L Lynch. Subs: J Keane for O'Donnell, S Kavanagh for Kenny, J Lawless (1-0) for Hogan, D Neary for Lynch. Sligo: J Farrell; C O'Grady, B Murphy, N Ewing, D McDonagh, P J Boyd, D Rooney (0-1); A McIntyre, S Gilmartin; S Stenson (0-3), B Neary, K Redmond (0-1); D Kelly, A McMunn, F Quinn (0-2). Subs: P Cawley for Neary, J Marren (1-0) for A McMunn, P McTiernan for Gilmartin, D O'Boyle for Redmond. Referee: D Corcoran (Mayo).

NZ media at odds with Kiwis and Lions
Rob Murphy, Connacht Branch IRFU media officer, reports from New Zealand on the Lions Tour. The mood among Lions fans was a mixture of frustration and anger as they left Christchurch and headed north to catch the ferry at Picton on Sunday and Monday - frustration with an inept performance by Clive Woodward's side and anger with the off-the-ball two pronged attack on Brian O'Driscoll which has left the floundering Lions without their captain and one spark in attack. The last two weeks of the tour have had their ups and downs. It started in Wellington for a midweek game against the city's NPC side. Three true dirt trackers (ie, thoe here from start to finish) were at their vocal best in the Westpac stadium as the Lions cruised to an uninspiring 21-6 victory. Dermot Costello and Paddy Delaney are travelling around in a van and have experienced the ups and downs. Costello was captain of OLBC this season and left for New Zealand just days after his side exited the Connacht Junior Cup at the quarter final stage to Monivea. " We came here six weeks before the tour began to raise a bit of cash so we could buy a van and have some spending money. Although I don't know if you would call what we have a van, but it's an automobile. Delaney is a Louth man who has been living in Galway for the past year. He and Dermot have secured tickets for all the provincial games but the test games are a different story. " We have one and a half test tickets each at the moment. The money is gone now. I am living off the interviews at this stage, the media coverage is keeping me going." James Stephens from Corofin and involved with Monivea Rugby Club is also here with the boys travelling and enjoying every minute despite the poor form of the Lions. From there it was on to Dunedin, a city often compared to Edinburgh, where the Lions defeated Otago 30-19 at Carisbrook - without question the high point of the tour as the team played with passion and commitment. Then Tuesday of test week saw an uneventful trip to Invercargill, New Zealand's most southerly city. A forgetful 10-point victory by a group of players who had been told they had no chance of making the first test. It was then off north to Christchuch. The sheer number of Lions' fans had more than tripled since the tour reached the South Island and the red army made up more than half of Jade stadium's 32,000 capacity. Tickets, which were like gold dust just last month, were in plentiful supply on match day. Annette Sheridan from Cork was searching for tickets with her friend and was offered a very reasonable NZ$250 for two by one of those touts. "I left my friend with him and went to find a bank machine, which took a while, and by the time I came back he had given her the tickets for free because he thought I was having trouble finding the money." The match proved nothing short of a disaster. Yet it was still compelling viewing as one observed Clive Woodward's flawed team selection selfdestruct in dramatic fashion. Those who were there witnessed one of the worst Lions' performances since 1983. ExBallinrobe and Corinthians' centre Pat Guckian was among the fans drowning their sorrows in the city centre afterwards. He arrived during the week and intends on taking in the three tests. He, like most, was frustrated with the effort. " We didn't build any phases in the pack. Once the first effort stalled we went straight to the packs and turned over possession." Guckian believes one man not even in the squad could have made a difference. "Johnny O'Connor would be in my test team. Neil Back isn't good enough and Martyn Williams is off form. Woodward made a big mistake by not bringing him." In the aftermath of the game supporters were in the dark over O'Driscoll's injury. There were murmurs of sinister tactics from the home side, but most waited for more conclusive pictures. Incredibly while Sky Sports in Britain and Ireland had a perfect picture of the incident, the host broadcaster, Sky Sports New Zealand, didn't, or at least didn't show it. The nations media brushed aside the incident on Sunday claiming pictures were inconclusive. By Sunday, footage (which shows Kevin Mealamu and Tana Umaga pick O'Driscoll up and drop him on his head) had finally found its way onto New Zealand television. The Monday press headlined the incident, but still took the angle that this was just Clive Woodward attempting to detract attention from the inept performance. The fiercely patriotic New Zealand media coverage has been a feature of the tour from week one and is bordering on the ridiculous at this stage. All this is completely at odds with the New Zealand culture. Kiwis are reserved and confident as sports fans and as people. They are overwhelmingly magnanimous in victory and going by the provincial games, they take their defeats with great dignity. Don't get the wrong idea, they are elated with the way they started the series, but they seem to prefer to sit back and quietly savour the victory. It is best summed up by a sign observed on the side of one of the many green hills on the way to Picton, where someone had used white stones to simply inscribe "1-0". Enough said. It's almost as if they are hiding behind the hill sniggering at us but they are far too courteous to go any further. This is a confident nation that expects victory and gets on with life when it comes. Their media seems to be from another planet though.

Galway's James Tierney in action from the Connacht minor championship game against Sligo at Pearse Stadium on Saturday. Photo:-Mike Shaughnessy

concern for the Tribesmen as they prepare for the Connacht decider. Credit, however, must be given to the Galway defence where St Michael's Kieran O'Connor repeatedly broke the Sligo hearts, popping up everywhere to clear his lines. However it was not a one-man show. Marcus O'Neill, Tomas Crowe, after a shaky start, and James Tierney, also did well. Indeed the work rate of Tierney, who was forced to help an ailing midfield, was crucial in Galway's survival. Eoin Concannon was the best of the attack, while Eddie Hoare played a crucial role, particularly in the closing stages when he moved outfield to win vital possession. Mark Gottsche, who

Marren's missed free, along with other missed chances during a dominant period of possession, that Sligo will regret. Sligo started the brisker with Brian Neary opening up the Galway defence, but he blazed wide in the opening minute. Less that a minute later Neary was also involved in setting up the opening score. However Conor Leyden became provider for Gareth Bradshaw who split open the Sligo defence for Galway's opener, and the Tribesmen tagged on another point through an Eoin Concannon free. Nine minutes into the game Sligo's Keith Raymond won a penalty, but Andrew McMunn's effort was brilliantly stopped by Galway custodian Eoin Costello.