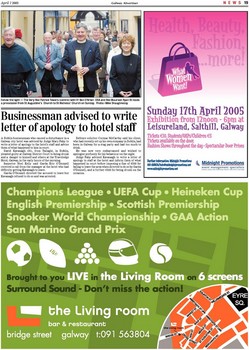 Businessman advised to write letter of apology to hotel staff
A Dublin businessman who caused a disturbance in a Galway city hotel was advised by Judge Mary Fahy to write a letter of apology to the hotel's staff and advise them of what happened to him in court. David Kavanagh (31), from Tallaght, in Dublin, pleaded guilty at Galway District Court to being drunk and a danger to himself and others at the Travelodge Hotel, Galway, in the early hours of the morning. Inspector Noel Kelly said Garda Eric O'Donnell received a call from the manager at the hotel who had difficulty getting Kavanagh to leave. Garda O'Donnell directed the accused to leave but Kavanagh refused to do so and was arrested. Defence solicitor Cormac McCarthy said his client, who had recently set up his own company in Dublin, had been in Galway for a stag party and had too much to drink. He was now very embarrassed and wished to apologise profusely for his behaviour on the night. Judge Fahy advised Kavanagh to write a letter of apology to staff at the hotel and inform them of what happened in court before imposing a fine of 200 for failing to leave the area when directed to do so by Garda O'Donnell, and a further 100 for being drunk on the occasion.