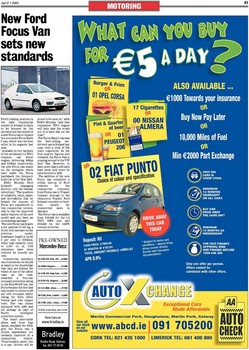 Ford's leading position in the light commercial market in Ireland is likely to be boosted by the introduction this month of a new Focus van to replace the successful Focus Mark I van, which was the best seller in its segment last year. Available in two variants of the acclaimed 1.6 TDCi common rail diesel engine, delivering 90bhp and 110bhp respectively, the new Focus van draws on the strengths which have made the Focus hatchback the Semperit Irish Car of the Year 2005. Eddie Murphy, Ford Ireland's managing director, told the Galway Advertiser: "The qualities of reliability, value, space, and driveability that lie behind the success of Focus are transferred to this commercial version. Add to this the improved safety features of the new model and you have an outstanding package." The new Focus van boasts a net payload of 442 kg, a 10 per cent increase on the previous model. Loadspace length is up by 5 per cent to 1529mm, while load capacity rises to 1.247 cu m. CO2 emissions have been reduced by some12 per cent. Commercial operators can concentrate on the job at hand in the knowledge that they are behind the wheel of one of the safest vans on the road. Awarded a five-star occupant protection rating in the EuroNCAP test, the Focus became the first and only model to receive a 100 per cent occupant safety rating for both offset frontal and side impact tests. The van comes equipped with ABS and six airbags as part of Ford's intelligent protection system. The smart nine-spoke alloys and front fogs lamps, available for 500, give the Focus van a stylish appearance not instantly expected of a commercial vehicle. "Functionality aside, this is a van drivers will be

proud to be seen in," adds Eddie Murphy, "and that responsive TDCi engine will help take the strain out of a hard day on the road." The Focus Mark I van was the best-selling carderived van in Ireland last year, with a total of 581 units registered. In the first quarter figures just released, the Focus Van is running second to the VW Golf Van. However, to date, more than 1,300 units have been sold since its introduction in 2002. The addition of the new Focus van completes a stellar line-up of Ford vehicles for the commercial customer, from Fiesta van to Transit Connect through to the ubiquitous Transit. Ford Ireland recorded its bestever month for commercial sales in January. The Focus van is available from 19,690 for the 1.6 TDCi 90PS unit and 20,890 for the 110PS version ex-works.