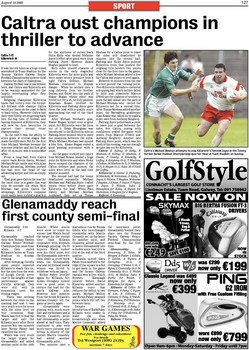 Caltra oust champions in thriller to advance
Caltra 2-12 Killererin 0-14
It was like old times as a huge crowd assembled in Tuam Stadium for the Tommy Varden Galway Senior Football Championship quarter-final between the clash of champions. Galway football was a real winner here, and Caltra and Killererin are to be warmly applauded for the hugely entertaining affair they provided. Reigning champions Killererin knew that victory over the former All Ireland club champs Caltra would put them on the road to back to back titles. However Caltra had their eyes firmly set on getting back into the big time of football and having disposed of Killererin, they will now be firm favourites to capture their second count championship. In the end it was the ability to score goals at crucial stages that made the difference. Not for the first time Michael Meehan became the supreme poacher and his first goal after 15 minutes was a memorable affair. From a long ball from Caltra centre back Kevin Gavin, Michael Meehan broke inside and with Alan Keane advancing, Meehan puched the ball over the head of the advancing keeper and into an empty net. That goal gave Caltra the lead for the third time in a game that was only 20 seconds old when Noel Meehan had given Caltra the advantage. Killererin's response could easily have yielded a goal but for the alertness of corner back Oisin Kelly who denied Nicholas Joyce's effort after good work from Padraig Joyce. However James Hughes pointed to level. Both sides missed chances of scores in the early stages,but Killererin were the more guilty and were under severe pressure from a tight Caltra defence. Michael Meehan continued to display danger. When he latched onto a long delivery from his brother Declan and fisted into the path of Shane Hogan whose effort was forced out for a 45, he duly pointed. Jonathan Keane levelled for Killererin and Padraig Joyce gave them the lead with a quality score approaching the end of the third quarter. After Michael Meehan's goal, Shane Hogan kicked over a good point, but Killererin were far from out of it. Dean Heneghan was introduced to the Killererin side as Padraig Joyce pointed twice to leave the minimum between the sides. While Michael Meehan had missed a 20m free, Shane Hogan ended a good passing movement with a point. As the game trickled into injury time Michael Keane landed a huge point for Killererin and when Nicky Joyce escaped the shackles of the Caltra defence and pointed, the sides were level as the half time whistle sounded. The second half had the teams deadlocked repeatedly. Michael Meehan and Padraig Joyce traded points twice before Joyce gave Killererin the lead. When Paul Gately and Michael Meehan combined, they set up Tomas Meehan for a Caltra point to leave the sides still deadlocked 10 minutes into the second half. Padraig and Nicky Joyce pointed Killererin frees that pushed the reigning title holders two points clear for the first time in the game, while Michael Meehan added a free for Caltra and points to level again. However 11 minutes from the end a score proved the turning point. Two Killererin defenders contested a dropping ball which neither failed to hold and substitute Marcus O'Neill got the slightest of touches to push the ball ahead into the path of Michael Meehan who rattled the Killererin net for a second time. After Tomas Meehan added another point, the Barnaderg goalkeeper Alan Keane was called on to make a super save from Anthony Keighrey. Padraig Joyce pulled back a point to leave just a goal between the sides, but Caltra, oozing with confidence, sealed the game with points from Marcus O'Neill and Anthony Keighrey. Another late Padraig Joyce point, which was his ninth of the evening, was not enough as time ran out for Killererin. Caltra: K Kilroy; O Kelly, E Meehan, B Kilroy; D Meehan, K Gavin, P Gately; O Hennelly, B Laffey; A Keighrey (0-4), T Meehan, J Galvin; M Meehan (0-7), N Meehan (0-2), S Hogan (0-1). Subs: M O'Neill for Laffey. Killererin: A Keane: D Flaherty, M Mitchell, M Nicholson; D Kelly, T Joyce, O Wilson; T Hughes, M Keane; J Hughes, J Keane, P Joyce, T Flynn; N Joyce, T Wilson. Subs: D Heneghan for Kelly, A Hynes for Nicholson, S Hughes for J Hughes. Referee: G Kinneavy.

Glenamaddy reach first county semi-final
Glenamaddy 0-10 Killanin 0-7 Glenamaddy reached their first Tommy Varden Galway Senior Football Championship semi-final when they ended Killanin's hopes at Tuam Stadium on Sunday evening. After defeating Corofin many people expected Killanin to shade this tie, but the men from the west of Lough Corrib never rose to the heights of that performance against Corofin although they were still well in contention until the closing stages. There was nothing between the sides in the opening half and it was very much score for score with the sides level on four occasions. Shay Walsh was first to find the target and split the Killanin posts after three minutes but two minutes later Richie Fahey had cancelled the score. Walsh was very much the target player for Glenamaddy and added another point in the 10th minute. While scores were slow to come no sooner had Walsh found the target for the second time than Killanin responded with Stephen Kavanagh pointing. On 15 minutes Walsh kicked over his third point, but the Glenamaddy side were then dealt a cruel blow when the Glenamaddy star and All Ireland medal winner was forced to withdraw with an injury. Richie Fahey levelled again for Killanin, but Aidan Geraghty kicked over a good point to restore the lead for the north Galway side. However four minutes from the break Killanin's Adrian Connell left the game at parity again. Glenamaddy were playing with much more flair and enthusiasm and a Martin Conneely point had Glenamaddy a point ahead at half time. They continued to play with much more purpose and within a minute of the restart Martin Conneely had added another Glenamaddy point. Two minutes later a marvellous run by Tomas Giblin who interchanged repeatedly with Martin Conneely set up the latter for another point, and Conneely added another to power Glenamaddy into a double score lead (0-8 to 0-4) at the end of the third quarter. Killanin moved Gary Fahey from midfield to the edge of the square in a bid to get back in the game and the former Galway captain won a free which Stephen Kavanagh pointed before David Kinnevey added another Killanin score that reduced the deficit to two points. Michael Molloy and Richie Fahey swapped points which still left two between them. Despite the introduction of Enda Fahy, Killanin were unable to make the final breakthrough and when Martin Conneally added the insurance point, Glenamaddy booked their place into the Tommy Varden Galway Senior Football Championship semi-final for the first time. Glenamaddy: G Keaveney; S Silke, M Brogan, A Potter; L Giblin, T Giblin, A Hynes; P Geraghty (0-1), A Geraghty; T Walsh (1-0), C Ryan, L Conneally (0-1); M Conneally (0-1), S Walsh (0-5), M Molloy. Subs: E Burke for Walsh, T Morgan for Ryan, J Keaveney for Hynes. Killanin: M Lillis: PJ Gorham, P Fahy, C Ryan; M Lee, R Gibbons, T Gibbons; G Fahy, K Walsh; D Kinneavy, P O'Holloran, P Maloney (0-1); A O'Connell (0-3), R Fahy (11), S Kavanagh (0-6). Subs: A Fahy for O'Holloran, E Fahy for Walsh. Referee: T Kerin.