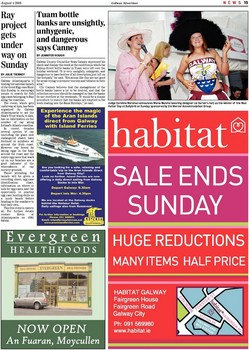 Ray project gets under way on Sunday
BY JULIE TIERNEY Galway Atlantaquaria is hosting the national launch of the Great Egg-case Hunt this Sunday to encourage people to search for fish egg-cases belonging to Ray along the coastline. The event, which gets underway at 1pm, has been organised by Galway Atlantaquaria to aid the Shark Trust which, to date, has no information on the number of ray along Ireland's Atlantic coastline. In recent decades several species of ray (including the giant now endangered skate) have declined in numbers all around the Irish coast. However ray breed by laying eggs in the bays around the coast and the empty egg-cases that wash up on our beaches are a good indicator of the whereabouts of ray nursery grounds. Those attending the launch will be given a recording sheet, egg-case identification chart, information on where to look for egg-cases, and the opportunity to practise egg-case hunting skills on a mock beach before heading to the seashore to find their own. This free event is open to all. For further details contact Kevin at Atlantaquaria on (091) 585100.

Tuam bottle banks are unsightly, unhygenic, and dangerous says Canney
BY JENNIFER HOUGH Galway County Councillor Sean Canney expressed his shock and dismay this week at the condition in which the Bishop Street bottle banks in Tuam were left over the holiday weekend. "It is very unsightly, unhygenic, and dangerous to have bottles of all description just left on the footpath," he said. "Situations like this are not good for areas trying to promote tourism and tidiness in their area." Cllr Canney believes that the management of the bottle banks leaves a lot to be desired, and that the collection services should be managed so that the banks do not overflow at the weekends. "It would be a simple procedure to ensure that the banks are emptied in the week leading into the Bank Holidays," he said.