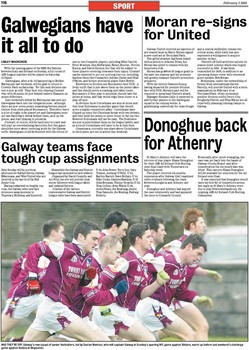 Galwegians have it all to do
LINLEY MACKENZIE With the opening game of the RBS Six Nations between Italy and Ireland on Sunday, a full round of AIB League matches will be played on Saturday (2.30pm). Galwegians, after a 68 -10 hammering to Belfast Harlequins last weekend, will be glad to return to Crowley Park on Saturday. Yet this next division one test is just as stiff. They host title-chasing Clontarf who with 28 points sit just behind leaders Shannon on points difference. Last weekend's defeat by Harlequins has now put Galwegians back into the relegation zone - although there are just seven points separating bottom-placed Carlow from sixth-placed Buccaneers. Therefore there is a lot of rugby to be played yet and Galwegians must put last Saturday's defeat behind them, pick up the pieces, and start playing to potential. Clontarf, of course, will be hard nuts to crack and will start as overwhelming favourites, but this game should be more about restoring pride for the Galway outfit. Galwegians could be boosted with the return of one or two Connacht players, including Mike Carroll, Peter Bracken, Dan McFarland, Henry Bourke, Steven Knoop, and David Slemen, but that will be subject to those players receiving clearance from injury. Clontarf can be expected to put out a strong line-out, including familiar faces like Connacht's Adrian Clarke and Niall O'Brien, and former provincial player Dave Hewitt. Elsewhere in division one Buccaneers host UCD - a lively outfit that is just above them on the points table and this should prove a cracking mid-table tussle. Buccaneers, if they play to potential, should take the points at home, and that would edge them closer to a play-off spot. In division three Corinthians are also at home and they host Suttonians in another game that should prove a highly competitive affair. Corinthians have slipped up since the Christmas break with two defeats, and they need the points to move closer to the top two. However Suttonians will not be easy. The Dubliners are just a point behind them on the league ladder, and as a result Corinthians will have to be at their best. Connemara, currently one place above Corinthians in third place, are not in action this weekend.

Moran re-signs for United
Galway United received an injection of pre-season hope as Barry Moran signed a new contract at Terryland Park. The gifted attacker had been linked with a switch to Athlone Town, but Moran has opted to remain with his hometown club. Moran has grabbed 20 league goals in the past two seasons and his presence will greatly enhance United's promotion prospects. With the electric Damien Dupuy having departed for premier division fare with UCD, Moran's pace will be required to spearhead United's attack. Manager Stephen Lally is expected to add further players to the Galwegian squad in the coming weeks. A goalkeeping understudy for Alan Gough and a central midfielder remain two critical areas, while Lally has also expressed a willingness to acquire another striker. United's off-field activities include its season ticket scheme which was hugely successful in 2004. It has been relaunched for 2005, in addition to an upcoming dinner event with renowned guest speaker Bob Bevan. Bohemians, under the stewardship of former Irish international Gareth Farrelly, will provide United with a stern examination on February 11 at Terryland Park. Other prominent premier division outfits Derry City, Drogheda United, and Finn Harps are all reportedly planning training camps in Galway.

Donoghue back for Athenry
St Mary's Athenry will have the services of star player Shane Donoghue for their AIB All Ireland Club Hurling semi-final clash with Toomevara on Saturday week. The player received six months suspension after Galway GAC examined video evidence following the clash between Loughrea and Athenry last year. Donoghue and Athenry had argued the case vehemently and had appealed the issue to Connacht Council. Eventually, after much wrangling, the case was put back into the hands of Galway County Board and after consideration the six month ban was lifted. This ensures Shane Donoghue will be available for selection for the All Ireland semi-final. It was expected that Donoghue would taste his first bit of competitive action last night as St Mary's Athenry were due to play Newtownshandrum, the reigning AIB All Ireland Club Hurling Champions.

AND THEY'RE OFF: Galway's new squad of senior footballers, led by Declan Meehan, who will captain Galway in Sunday's opening NFL game against Kildare, warm up before last weekend's challenge game against Ballina in Moycullen.