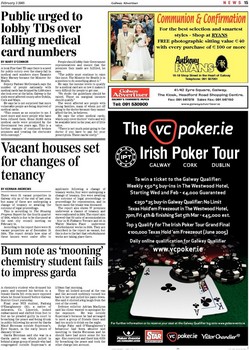 Public urged to lobby TDs over falling medical card numbers
BY MARY O'CONNOR A local Fine Gael TD says there is a need for public outcry over the sharp fall in medical card numbers since Tanaiste Mary Harney became the Minister for Health. Deputy Padraic McCormack says the number of people nationally with medical cards has dropped by 2,000 since she took over at the helm. Galway is the sixth worst affected county after Dublin, Cork and Mayo. He says he is not surprised that more vulnerable people are being deprived of medical cards. "This comes as no surprise to me. I meet more and more people who have been refused them. Some 20,000 extra medical cards were promised by the Government two years ago. This is a further example of continued broken promises and treating the electorate with contempt." People should lobby their Government representatives and ensure that the promises they made are fulfilled, he says. "The public must continue to raise this issue. The Minister for Health is in a position to do something about it." He says the income levels to qualify for a medical card are so low it makes it very difficult for people to get one. "No doubt the guidelines should be raised. Those on marginal incomes should qualify." The worst affected are people with young families, many of whom put off going to the doctor because they cannot afford the fee, he believes. He says the other medical cards, which only cover doctors' visits and will be available later in the year, are of little value. "There is not much point going to the doctor if you have to pay for your prescription. These can be costly."

Vacant houses set for changes of tenancy
BY KERNAN ANDREWS There were 21 vacant properties in Galway city as of the end of last year, but many of these are undergoing a change of tenancy or awaiting the outcome of legal proceedings. This is according to The Housing Progress Report for the fourth quarter of 2004, which is due to be discussed at the next city council meeting on February 14. According to the report there were 21 vacant properties as of December 31 2004. The report details how nine of these houses were under offer to applicants following a change of tenancy works, four were undergoing a change of tenancy, five were awaiting the outcome of legal proceedings or proceedings for repossession, and in three cases the tenant was deceased. The report also shows 57 premises underwent a chance of tenancy and were reallocated in 2004. The report also showed that 50 units of accommodation - four in St Finbarrs Terrace and 46 in Walter Macken Place - underwent refurbishment works in 2004. They are described in the report as vacant, but this is due to the fact that refurbishment works are taking place there.

Bum note as `mooning' chemistry student fails to impress garda
A chemistry student who dropped his pants and exposed his bottom to a female Garda felt even more exposed when he found himself before Galway District Court yesterday. Final year NUI student, Padraig O'Shaughnessy (21), a native of Askeaton, Co. Limerick, looked embarrassed and shifted from foot to foot as he pleaded guilty in court to breaching the peace and being drunk in public following his arrest by Garda Maud Horsman outside Supermac's, Eyre Square, in the early hours of January 10 last. Garda Horsman said she was in a Garda patrol van which pulled in behind a large group of people who had congregated outside Supermac's at 2.50am that morning. They all looked around at the van and the accused suddenly turned his back to her and pulled his pants down. She said it elicited a big laugh from the rest of the crowd. Defence solicitor Adrian MacLynn said his client wanted to apologise for the exposure. He was outside Supermac's because he had arranged to meet a group of friends there and had too much to drink on the night. Judge Fahy said O'Shaughnessy's behaviour had been abusive and insulting to Garda Horsman and he should have had more sense for his age. She convicted and fined him 250 for breaching the peace and took the other charge into account.