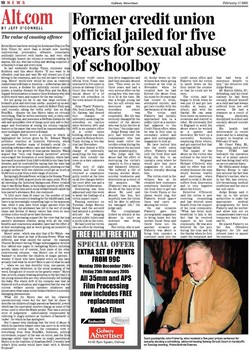 The value of causing offence
Kevin Myers has been writing the Irishman's Diary in The Irish Times for more than a decade now. Acerbic, controversial, provocative, offensive, iconoclastic, politically incorrect with knobs on, and very often refreshingly honest, his column is essential reading for anyone, like me, who has a deep and abiding suspicion of orthodoxy's of any and every kind. In last weekend's Sunday Times, columnist Alan Ruddock said this about Myers: "If you want to be offended, read him and wait: He will reward you if you belong to the consensus, and you will not have to wait too long. Myers' world-view would be seen as relatively mainstream in Britain or America -- a libertarian take on some issues, a disdain for politically correct mumbo jumbo, a healthy distaste for Sinn Fein and the IRA, a dogged determination to honour those Irishmen who died in both world wars, and support for the war on Iraq." It's not going too far to say that large sections of Ireland's print and electronic media - pumped up on antiAmericanism (when in doubt, reach for Robert Fisk) and, until recently, taking the `softly softly' line on Sinn Fein/IRA - despise the line Myers takes on virtually everything. That he writes extremely well, is often sidesplittingly funny, and possesses a Swiftian disdain for the safe and acceptable view of things must only add to their anger and frustration at seeing his column regularly feature in the paper that sees itself as unquestionably the most intelligent and incisive in Ireland. Last week Myers wrote a column in which he highlighted the lecture given by Dr Edward Walsh, professor emeritus at Limerick University, which questioned whether many of Ireland's social ills -- including substance abuse, rape, and child abuse -- could be linked to the growth of lone-parent families. Walsh argued that "very real financial incentives" actively encouraged the formation of such families, which have increased in number from 3,000 to 80,000 in less than three decades, and he concluded by saying that the state had gone too far in its support of lone parents, pointing out that a single mother with two children could get as much as 25,000 euro a year from a wide range of sources. Intriguingly, Brenda Power, writing in the Sunday Times of January 30 2005, argued much the same point. First of all sketching the historical background, Power recalled that it was Richie Ryan, in his budget speech in 1973, who introduced the then novel social welfare benefit called the lone parent's allowance. But, she continued "A little more than 30 years on, the number of lone parents in the country is heading for the 100,000 mark. And there is an increasingly compelling logic to the argument that, while it may have freed single parents from the poverty trap, the allowance has led to the sort of social chaos and decline of family values that even its most strident critics would never have foreseen. "There is increasing support for the view that the lone parent's allowance scheme, along with all the other benefits and concessions available, have had the effect of at best normalising, and at worst giving an incentive to, single parenthood." Myers' point - which was also that of Dr Walsh - was virtually the same as that of Brenda Power. What was different, and what caused the uproar - for example, Vincent Browne's boring Village newsmagazine devoted four tabloid-size pages to castigating Myers, including quotes, taken out of context, from some of his other controversial columns - was Myers' use of the word `bastard' to describe the children of single parents. I wonder if those who have heaped scorn on him have actually read what he wrote? Here is part of what he said: " ... when we use that deceitful term, one-parent, we actually mean fatherless, in the social meaning of the word, though not of course in the genetic sense." Myers was, in truth, simply drawing attention to the fact that it is the young women who are very often literally left holding the baby. The whole drift of his remarks was that he deplored such a situation, and suggested that the way the current welfare system operates reinforces and perpetuates what many social thinkers believe is a socially damaging phenomenon. What did for Myers was not his relatively uncontroversial views but the fact that he chose to describe the children of single parents as `bastards', a word which has the equivalent emotive charge as some of the terms used to describe Black people. This was a serious error of judgement - unfortunately compounded by referring to single mothers as `mothers of bastards' or `mobs' - for which he has apologised. But I cannot help thinking that the level of abuse to which he has been subject since has more to do with his consistently critical take on the consensus view of everything from Sinn Fein/IRA, feminism, political correctness, support of the war on terror, and the Irish language rather than his views on single parenthood. Myers is in the tradition of Jonathan Swift. I wonder how today's Irish media would have dealt with A Modest Proposal?

Former credit union official jailed for five years for sexual abuse of schoolboy
A former credit union official from Tuam was sentenced to five years in prison at Galway Circuit Court this week for the sexual abuse of a 13 years old schoolboy in the town almost 30 years ago. John "Flash" Flaherty, (56), from Lavally, Tuam, Co. Galway, had denied four charges of indecently assaulting the schoolboy on various dates between 1974 and 1975 in an upstairs office at a credit union building, which was then situated at Bishop Street, Tuam during a two-day trial last November. He also denied a fifth charge of indecently assaulting the boy near sand hills outside the town on a date unknown in 1976. The jury of eight women and four men returned a unanimous guilty verdict at the time on all five charges before the court after one and a half hour's deliberation. Sentencing was then adjourned until this week to await the findings of a victim impact report. Passing sentence on Tuesday, Judge Harvey Kenny said the accused had adopted a predatory attitude by hanging around public toilets and a youth club in the town. He had lured his victim into an office by showing him dirty magazines and had then sexually abused him. "This went on for three years and had a very serious effect on the young boy who was only 12 or 13 at the time. He was a bright young lad but his self esteem was destroyed and his secondary school education was suspended. His life was seriously damaged by the conduct of the abuser who was in his thirties at the time," the judge said. Judge Kenny said the jury had believed the complainant who had been made relive the terrible ordeal during the trial because the accused had not pleaded guilty. The judge said the abuse had the effect of destroying the victim's capacity to live a happy and balanced lifestyle. "He suffered a life of trauma, alcohol abuse, suicidal tendencies and depression as a result of the assaults. "He [Flaherty] was a man in his 30s at the time of the abuse. He used and abused this boy, but hopefully now, the victim will be able to address his damaged life," the judge said. The complainant looked on silently at his abuser in court as sentence was being passed. The victim, who is now 43, broke down in the witness box when giving evidence at the trial in November when he recalled how he had blotted the abuse from his mind for 30 years and had turned to drink, attempted suicide, and got into trouble with the law because of the abuse. The victim said Flaherty had initially approached him in a public toilet at a snooker hall adjacent to the Credit Union office, when he was in first year in secondary school and gave him pornographic magazines to look at. He later invited him into the credit union office. Flaherty would lock the front door and bring the boy to an upstairs room where he would give him more magazines to look at before sexually abusing him. The victim cried in the witness box as he recalled how customers sometimes knocked at the front door to get into the Credit Union or the phone would ring, but Flaherty would ignore them and carry on abusing his victim. On one occasion Flaherty gave him pornographic magazines to bring home but his mother found them and threw them out. On another occasion as Flaherty was about to bring him upstairs a customer came into the credit union office and Flaherty told his victim to kneel down on the floor inside the counter so that he could not be seen. The victim said he began to drink when he was just 13 and got into trouble at home, at school, and with the Gardai. He ran away from home on numerous occasions and started to rebel. He eventually fled to England to avoid the abuse where he worked as a painter and decorator. He built up a successful business, employing three others, and got married but that marriage failed. The impact of the abuse on the victim was outlined to the court by Detective Sergeant Michael O'Driscoll who said its effect was still evident because the man would become tearful and emotional when asked to recall it. He also suffers from depression and is very negative about his future. Detective O'Driscoll said the victim is now receiving counselling and has derived some benefit from the support of his local community. "What has been most beneficial to him is the fact that he received support in his local community. He was also believed by the jury during the trial and by the Gardai when he first made the complaint and that had been of enormous benefit to him," the detective told Judge Kenny. Mr Martin Giblin, SC, defending, said his client claimed he had been sexually abused himself as a child and had always suffered from low self esteem. He had a stammer as a result of being physically disciplined in school and sexually abused outside school. His health had deteriorated in recent years and he is awaiting surgery in hospital on February 27 next. Mr Conor Fahy, BL, prosecuting, said a letter from UCHG had indicated the operation was of a minor nature and was being dealt with on an out-patient basis. Mr Giblin asked Judge Harvey Kenny to take into account the fact that Flaherty's mother, who is in her 90s, has serious, life-threatening medical conditions and her son is her sole carer. Judge Kenny said it was up to the prison authorities to make the appropriate medical arrangements for both Flaherty and his mother and allow him out on compassionate leave on a temporary basis if they saw fit. He placed Flaherty on the Sex Offenders Register for life and refused leave to appeal the sentence.