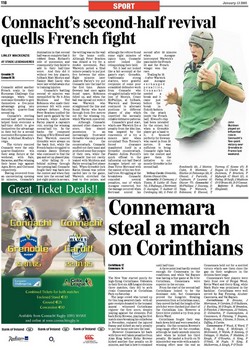 Grenoble 21 Connacht 26
Connacht added another French scalp in their European Challenge Cup campaign when they overcame Grenoble to give themselves a five-point advantage going into Saturday's quarter-final second leg. Connacht's sterling second-half performance helped them overcome a half-time deficit to give themselves the advantage in their bid for a second successive European semifinal in Michael Bradley's reign. The victory ensured Connacht were the only quarter-finaliststo win their away fixture at the weekend, with Sale, Saracens, and Pau winning their home legs against Agen, Brive, and Clermont respectively. Having recovered from an unconvincing opening 20 minutes, Connacht's

domination in that second half was so complete that it robbed Dean Richard's side of possession and consequently they failed to add to their half-time score. And they did it without two key players, fullback Matt Mostyn and flanker Matt Lacey who were late withdrawals due to training injuries. Connacht's battling second 40 minutes was exemplified by No 8 John Muldoon and Ted Robinson who made their presence felt with some stalwart defence. Prop Peter Bracken typified the hard yards gained by the forwards, while Andrew Farley played a captain's role, scoring the winning second-half try. In the backs the composed kicking of Eric Elwood and Paul Warwick ensured Grenoble were always on the back foot, while the French backs struggled to contain James Downey who continued to find the gap and set up phased play. After falling 21 - 6 behind midway through the opening half, Connacht fought their way back into the contest and when they went into the second half just eight points in arrears,

the writing was on the wall for the home outfit. Although Peter Bracken was denied a try for a double movement, Paul Warwick potted a 52nd minute penalty to put just five between the sides. Eight minutes later Andrew Farley's try put Connacht into the lead for the first time. James Downey had once again found space, Robinson tidied up, and when the ball was spread out wide it was Warwick who straightened the line and found Farley who burst through from five metres out for the winning try, which Warwick converted. Although Connacht spurned other chances to score, they denied possession to an increasingly frustrated Grenoble who only posed a threat on the counterattack. Connacht snuffed out their maul and produced some fine surges of their own, while the Connacht line-out rarely leaked with Muldoon and Farley securing first phase ball. When Grenoble lock Karim Ghezal was yellow carded late in the game, Warwick stretched the lead to five points, and

although the referee found some eight minutes of injury time, Connacht never looked like relinquishing their hold. Yet it had not looked like a fait accompli at the game's start. Grenoble, traditionally strong starters, were grateful recipients of some poor scrambled defensive work from Connacht who struggled initially with the loss of Mostyn. Conor McPhillips, at fullback, Warwick and Downey continued to alternate positions in different phases of play which unsettled the normally reliable defensive patterns. Connacht's good start, which saw Warwick fire a penalty from the 10m line, was negated by the concession of a try a minute later when scrumhalf Tom Tierney's forced clearance manifested itself in a Grenoble counterattack. Flanker Jullien Purcell's quick offload to the influential out-half David Aucagne helped set up Jean Victor Bertrand with the easiest of his two firsthalf tries. Struggling at the breakdown Connacht conceded several penalties, one of which Aucagne converted, but the damage occurred when Bertrand scored his

second after 20 minutes when Aucagne intercepted Warwick's pass inside the French 22 and the French winger won the race. Trailing by 21 - 6 after Warwick and Aucagne exchanged penalties, Connacht needed a break and it came just before the break in flukish fashion. On the attack inside the French half, Elwood's chip had been intended for the corner, but when a Grenoble player got a hand to it, it bounced perfectly for Downey who raced in from 20 metres. It was sufficient to bring Connacht right back into the contest and gave them the initiative to outmuscle Grenoble in the second half. Yellow Cards: Grenoble, Karim Ghezal 83m. Grenoble: N Carmona; J Tiatia, R Lubbe (E Tuni 74), S Hufanga, J Bertrand; D Aucagne, Y Authier (S Cordingley 56); S Petit (S

Connemara steal a march on Corinthians
Corinthians 12 Connemara 14
The New Year started poorly for high-flying Corinthians. Unbeaten in their first six AIB League division three matches, they fell to arch rivals Connemara at Corinthian Park on Saturday. The large crowd who turned up for this long-awaited clash - with all gate receipts donated to the tsunami appeal - witnessed Corinthians register the first score, despite playing against the elements. Full back Ricky Browne, playing his first match since breaking his collarbone in November, replaced the injured Danny and kicked an early penalty to put the home side into the lead. However Connemara hit back with three well taken penalties from Alan King before Ricky Browne kicked another fine penalty on 30 minutes, and that is how it remained

until half time. A three-point lead hardly seemed enough for Connemara in the conditions, and while Val Baynes was having a fine game at No 8 for Corinthian, Connemara were superior in the scrums. From the start of the second half Corinthians looked to be the dominant side, but Connemara proved the hungrier. Stealing possession from a Corinthian maul, they moved the ball the length of the pitch but were checked just short of the Corinthian line. However a fierce drive yielded a try from prop Kevin Ward. Corinthians fought their way back down field and were awarded a penalty. On this occasion Browne's long-range effort hit the crossbar, although he made amends minutes later when he kicked his third penalty. He landed a fourth on 70 minutes but was wide with a matchwinning effort near the end as