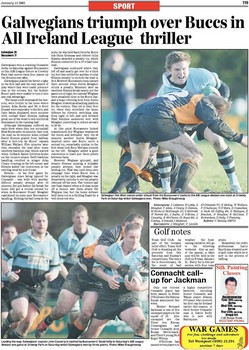 Galwegians triumph over Buccs in All Ireland League thriller
Galwegians 20 Buccaneers 17
Galwegians won a cracking Connacht derby on Saturday against Buccaneers in this AIB League fixture at Crowley Park that moves them four places up the division one table. Galwegians played the better rugby in the first half and the only aspect of play where they were under pressure was in the scrums, but the bulkier Buccs' pack were unable to turn it into any real advantage. The home outfit dominated the lineouts, were livelier in the loose where hooker John Burke and No 8 Scott Donald were especially to the fore, and their backs displayed more purpose with outhalf Dave Slemen making great use of the wind to win territorial dominance in the opening half. Although Galwegians suffered an early blow when they lost scrumhalf Mike Roche after 10 minutes, they took the lead on 19 minutes when outhalf David Slemen goaled from halfway after a foot-trip by Buccs' captain William Wallace. Five minutes later they extended the lead after some excellent backline play which started when fullback James Littleton broke on the counter-attack. Swift backline handling resulted in winger John Cleary crossing in the left corner and Slemen added the conversion in the swirling wind for a 10-0 lead. Slemen - in his first game for Galwegians since being injured for Connacht - was wide with another difficult penalty attempt after 33 minutes, but just before the break the home side got a crucial second try when ex-Buccaneer Stuart Meagher capitalised on some poor Buccaneers' handling. Kicking the ball towards the posts, he was held back twice by Buccs sub Oisin Grennan and referee Colin Stanley awarded a penalty try, which Slemen converted for a 17-0 half-time lead. Galwegians continued where they left off and nearly got over for a third try, but they settled for another crucial Slemen penalty to stretch the lead to 20-0. However Buccaneers soon opened their account when Justin Meagher struck a penalty. Moments later an excellent Slemen break nearly put the game out of sight, but instead Wegians were penalised close to the Buccs line, and a huge relieving kick from Justin Meagher created an attacking platform for the visitors. This led to their first try when they stretched the home defence by cleverly switching play from right to left, and lock forward Niall Smullen sauntered over with Meagher converting to reduce arrears to 20-10. At this point Buccaneers looked transformed, but Wegians weathered the storm and defended well. On 66 minutes another Justin Meagherinspired move saw Buccs score a second try, remarkably similar to the first when lock Rory McCann crossed on the left. Meagher added a good conversion to leave just three points between them. However Wegians grouped, and despite Slemen missing a kickable penalty attempt, they looked like holding out. That was until deep unto stoppage time when Buccs won a penalty on the right, and Meagher was desperately unlucky to see his penalty rebound off the post. The visitors had one final chance when a 15-man surge off a lineout saw them attack the Wegians line, but the home defence held them out in a thrilling finale for a well-deserved win.

Galwegian Tom Allen comes under attack from the Buccaneers' backs in the AIB League division one clash at Crowley Park on Saturday which Galwegians won. Photo:-Mike Shaughnessy

Golf notes
Tuam Golf Club: As part of the tsunami relief effort, Tuam Golf Club is donating all the proceeds from this Saturday and Sunday's competitions. The entry fee is discretionary. In the event of bad weather the fundraising initiative will go to the following weekend. Also as part of the appeal, a table quiz will be held in the club on Friday, January 21. Entry fee is 10 per person with four team prizes. Meanwhile the club's professional Larry Smyth has donated a set of golf clubs which he is now in the process of raffling.

Connacht callup for Jackman
Only one current Connacht player has been named in Eddie O'Sullivan's Six Nations Squad announced this week. Hooker Bernard Jackman is one of five uncapped players in the squad of 35. Also uncapped are the Ulster duo Kieran Cunningham and former Connacht prop Ronan McCormack, and Ulster's young No 8 Roger Wilson. O'Sullivan has named seven players in a highly competitive backrow, including former Connacht and Wasps player Johnny O'Connor who received his first cap for Ireland earlier this season. A third former Connacht man is Gavin Duffy who is now with Harlequins.