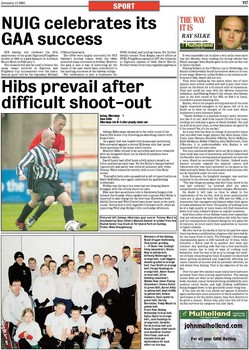 NUIG celebrates its GAA success
NUI Galway will celebrate the 25th anniversary of the great Sigerson/Fitzgibbon double in 1980 in a gala banquet in Ardilaun House Hotel on February 5. The occasion will also be used to honour the many teams involved in Sigerson and Fitgibbon Cup tournaments over the years. Special guest will be the legendary Michael O'Mhuircheartaich. The 1970s were hugely successful for NUI Galway's hurling teams, while the 1980s produced many successes in football. However the gala is also a way of honouring all the teams of the past which have contributed to the sporting successes at the Galway college. The celebration is also a fundraiser for NUIG football and hurling teams. For further details contact Tony Regan, sports officer at NUIG, Fitzgibbon captain of 1977 Joe Connolly, or Sigerson captain of 2002, David Morris. Further details from tony.regan@nuigalway.ie

THE WAY IT IS
RAY SILKE
In association with:

Hibs prevail after difficult shoot-out
Galway Hibernians 1 Dean Celtic 1 Hibernians win 10-9 after penalty shoot-out
Galway Hibernians advanced to the sixth round of the Statoil FAI Junior Cup following an absorbing contest with Dean Celtic. In a game that was loaded with drama and excitement, Hibs prevailed against a decent Kilkenny side that posed stern questions of the home side's resolve. However Hibs refused to be perturbed and were rewarded after an elongated shoot-out in which 22 penalties were bizarrely taken. David Lynch had rifled home a 24th minute penalty as Celtic pinched an early lead. Yet Joe Reilly's charges battled vigourously and parity was restored moments later when Tommy Ward connected sweetly with a cute Colie Kelly corner. Thereafter both sides squandered a raft of opportunities as Mark McPhilbin once again underlined his goalkeeping credentials. Philbin was the hero in a tense last act denying James Donaghy with the critical shoot-out save. Hibs now face an arduous trek to Inishowen League club Aileach this Sunday when capable new supremo Paul Reidy is expected to take charge for the first time. Elsewhere both Salthill Devon and West United have home times in the sixth round. Devon host a well regarded Crettyard outfit, while an improving West play Bridge Celtic on Sunday afternoon.

It was impossible not to allow a wry smile cross one's lips last Monday when reading the strong rebuke that Meath manager Sean Boylan gave to the new sin bin rule in Gaelic football. Playing Kildare in the O'Byrne cup in Newbridge, the Royals (unbelievably) found themselves down to 12 men at one stage. However, unlike Dublin in the infamous allIreland of 1983, Meath did not win. They were leading by two points when two of their players were yellow carded and had to join their other sinner on the bench for a 10 minute stint of repentance. They just could not cope with the obvious numerical imbalance. And Padraig Nolan's Lily-whites, who Galway play in the first round of the NFL on Feb 6 at home, recorded a morale-boosting win. Boylan, who is the longest serving and one of the most highly respected managers in the game, left us in no doubt as to what he thought of the new laws which implement a zero tolerance policy. "Gaelic football is a physical contact sport, whether you like it or not. And to be honest I'd love if my team could go out and play a game of Gaelic football. You end up with 12 on your team, so what dominates the game? Is it the scores? No, it's the sin bin." As a man who has been in charge of successful teams that included teak tough players like Mick Lyons, Colm Coyle, Liam Harnan, Brendan O'Reilly, Gerry McEntee, Enda McManus, Bobby O'Malley, John McDermott, Colm O'Rourke, it is understandable why Boylan is not impressed with the new rules. The men mentioned above were not dirty players, but they could take care of themselves, and they understood the benefits that a strong physical approach can have for a team. Stand on ceremony? No thanks. Indeed many players actually enjoyed the physical nature and robustness that was more prevalent in the game in the 1980s and early 1990s. Such physicality and cynicism will not be tolerated under the new rules. Luke Dempsey, the Longford manager, was another sceptical in the extreme about the sin bin rule. "The way things are going, why don't they throw in the oval ball entirely," he retorted after his side's comprehensive defeat to his former charges, Westmeath. No doubt it will take us time to adapt to the implications of the sin bin. And as these experimental rules are in place for both the NFL and the NHL, it is imperative that managers and players adapt their game to make allowance for them. The quality of tackling must be of a high quality or more teams will find themselves down to at least a baker's dozen on regular occasions. And when either of our Galway teams meet opposition that are extremely disciplined and au fait with the rules and the consequences of players being out of a game for 10 minutes, we must match their application or success is highly unlikely. My own view on the sin bin is that in the past few years there has been a proliferation of games that have had by far too many frees in them. The Donegal v Fermanagh championship game in 2003 hacked out 70 fouls, while Limerick v Kerry had 66 in another foul feast last summer. Any sporting code that has a free practically every minute has to look at ways of curbing such behaviour. And the way to do so is to change the mindset of those committing the fouls. If a player is concerned about getting sin-binned and negatively affecting his teams chances of success and his personal selection, he will desist from fouling. That is the objective of the sin bin. Over the past few seasons many teams have had more personal fouls than scoring opportunities. The paying punter does not want to see players being continuously body-checked, corner forwards being straddled by over anxious corner backs, and high fielding midfielders being dragged down to the ground by lesser wing men. If the new sin bin rule allows our games to breathe again and become more attractive to watch and better to participate in for the skilful player, than they deserve to be given a chance. Either way, only time will tell if the sin bin survives the congress cull next April.