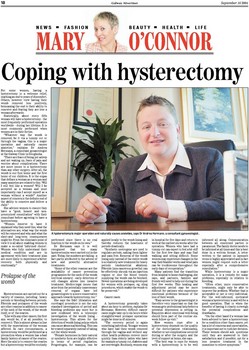 MARY O'CONNOR Coping with hysterectomy
For some women, having a hysterectomy is a welcome relief, marking an end to years of discomfort. Others, however view having their womb removed less positively, bemoaning the end to their ability to conceive and fearing they are less a woman afterwards. Statistically, about every fifth woman will have a hysterectomy - the most frequently performed operation worldwide - during her lifetime. It is most commonly performed when women are in their forties. "Whatever way the womb is removed, be it via a tummy cut or through the vagina, this is a major operation and naturally causes anxieties," explains Dr Andrea Hermann, a consultant gynaecologist at the Galway Clinic in Doughiska. "There are fears of being put asleep and not waking up, fears of pain and worries about complications. There are more issues to a hysterectomy than any other surgery. After all, the womb is our first home and the first home of our children. It is the organ that defines a woman as a woman and many anxieties are related to this. `Will I still feel like a women? Will I be accepted as a woman and most importantly can I accept myself as a woman without a womb?' Another aspect of concern is the definite end of the ability to conceive and deliver a child." She advises women to ensure they have a "good, honest and nonpressurised consultation" with their consultant before agreeing to have a hysterectomy. "Women deserve to have it explained why they need this, what the alternatives are, what way the womb will be removed and why and what the short-and long-term consequences might be. From the clinician's point of view it is all about enabling women to make a so-called `informed choice'. Women who fully understand their medical condition and are in agreement with their treatment plan are more likely to experience a better recovery both physically and emotionally."

Prolapse of the womb
Hysterectomies are carried out for a variety of reasons, including heavy periods or bleeding between periods. Fibroids and prolapses of the womb are other reasons in addition to cancer of the neck of the womb, of the womb itself, or of the ovaries. "Like with any other cancer, the first aim would be, if at all possible, to remove it. This is almost always in line with the expectations of the woman affected. In rare circumstances, a hysterectomy would be performed as a precaution when a women has a bad family history of cancer of the ovaries. Here the aim is to remove the ovaries but a hysterectomy would be routinely

performed since there is no real function to the womb on its own." Dr Hermann says it is well recognised that too many hysterectomies were carried out in the past. Today, the numbers are falling - a fact partly attributed to the advent of new and powerful alternative treatments. "Some of the other reasons are the availability of cancer prevention programmes for the neck of the womb (cervical smears) - early detection of cell changes allows less invasive treatment. Medico-legal issues that arise from the potentially unnecessary removal of organs have led gynaecologists to a more conservative approach towards hysterectomy, too." She says the D&C [dilatation and curettage] procedure is not the only standard investigation of period and bleeding problems any more but is now combined with a telescopic investigation of the womb lining hysteroscopy. This allows for the detection of womb lining polyps which can cause abnormal bleeding. This can be treated separately instead of taking out the whole womb. "Female hormones in their natural or synthetic form are highly effective in terms of period regulation. Progestogen, for example, can be

applied locally to the womb lining and thereby reduces the heaviness of periods drastically. "Synthetic oestrogens are used to regulate periods, naking them lighter and pain free. Removal of the womb lining only instead of the entire womb is a relatively new treatment for heavy periods (endometrial ablation). Fibroids [non cancerous growths] can be effectively shrunk via an injection regime or else the blood vessels supplying the womb can be blocked. Newer operations are being developed for women with prolapse, eg, sling procedures, which enable the womb to be preserved." Cancer cases A hysterectomy generally takes about an hour to perform, explains Dr Hermann. However, difficult cancer cases might take up to six hours while straightforward prolapse operations might be done in 45 minutes. "The recovery period is again something individual. Younger women who have had their womb removed through the vagina and without any other health problems recover more quickly than elderly ladies who have for example a tummy cut, diabetes and are overweight. Routinely, women stay

in hospital for five days and return to work at the earliest six weeks after the operation. Women who have had a tummy cut can expect to feel a bit stiff for the first few days and may find walking and sitting difficult. Some women may experience changes in the way their bladder works and wind pain can be troublesome throughout the early days of recuperation." Many patients find the transition from hospital to home challenging, she says, and partners, families and friends will need to help out during the first few weeks. This healing and adjustment period may be more difficult for patients who experience emotional problems because of the loss of their womb. "Easy access to the gynaecologist is therefore very important so that the woman gets professional help before a potential depression is setting in. Enquiries about emotional well-being should form part of the routine sixweek follow up visit." How women cope after a hysterectomy depends on the quality of the doctor/patient relationship, whether or not complications occurred during or after the surgery and the level of support at home, she says. "The best way to cope for women with a hysterectomy is to be well

informed all along. Communication between all concerned parties is paramount. The family doctor needs to be informed at all times and this is best done in a written format. A letter written to the patient in layman's terms is highly appreciated and in fact women might request such a letter especially after a comprehensive consultation." While hysterectomy is a major operation, it is a remedy for many problems, especially in relation to bleeding. "Often other, more conservative treatments, might only be able to improve the problem. Whether that is acceptable or not is very individual. For the well-informed, motivated woman a hysterectomy is and will be a good operation. That is when the benefits of having it clearly outweigh the potential complications and drawbacks. "On the other hand if a woman has been advised to have a hysterectomy for a condition other than cancer, yet has a lot of concerns and uncertainties, it is important not to rush her decision. These women should ask questions until they are answered to their satisfaction and if possible, opt for a less invasive treatment in the meantime to relieve symptoms."