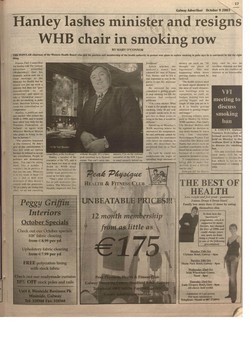 THE POPULAR chairman of the Western Health Board who quit his position and membership of the health authority in protest over plans to outlaw smoking in pubs says he is convinced he did the right Fianna Fail Councillor Val Hanley told The Galway Advertiser yesterday (Wednesday) that his dramatic action sent out a clear message to the Minister for Health that he would not put up with a minister that does not "give consideration t o all viewpoints" and opted to take a "dictatorial stance" on the no-smoking in pubs issue, therefore leaving no room for consultation or compromise. Hanley, a publican and non-smoker who joined the WHB in 1999, said it would have taken very little for the Vintners Federation of Ireland to agree with Minister Micheal Martin who plans to bring in the ban on January 1. "The minister bypassed us [the vintners). He didn't give us due consideration. I was left with no option because he refused to accept any consultation. People in politics are demanding more. You can't be sitting there like a noddic. I wouldn't be in politics if that was the case. Whatever is in my heart or head I'll say it and to hell with ministers if they doesn't consult with the grassroots. We as a party are losing that ethos, we are not consulting livelihood." Asked whether the minister's stance had coloured his view of Fianna Fail, Hanley said he felt it was important to stay in the party to get his message across. He stressed he was committed to getting people to stop smoking but felt the minister had cornered publicans. "I'm a non smoker. What I want is for people to stop smoking. Only 30 per cent of people smoke now. If we got two to three years to bring in the ban, it would be different." Speaking at Monday's WHB meeting where he announced his resignation, he said publicans cannot be responsible for customers who insist on smoking in pubs. He described the proposed ban as a "bad law". He said he could not understand the logic of spending large amounts of money on such an "ill thought out piece of legislation". This was happening when more pressing matters existed, he believed. "The health services need so much urgent attention in the area of ward closures, new buildings with no equipment, no staff, no budget, waiting lists are getting bigger and the length of time you are in A & E to finally getting admitted is getting longer and longer." Glowing tributes were paid to Hanley by fellow WHB members. Fine Gael's Cllr Michael Mullins said he regretted his decision to step down because he was a very fine chairman. Roscommon Fianna Fail councillor Des Bruen said Hanley had always made an excellent contribution to the board but he understood that because of a conflict of interest he decided to resign. "I compliment you on being able to make that decision. It was a difficult one for you." Daly said he was an excellent chairman and had dealt with his conflict of interest in an honourable way.

councillors at the forefront ' Hanley, a member of the executive of the VF1, said it was hard for him to step down as WHB head However, he believed the public want politicians to stand up for their rights. "That's what we're there for to jolt ministers into reality. The Minister [for Health] imposed this ban

without thought. It's a knee jerk reaction to a flawed report. You can't serve two

masters, I'm on the national executive of the VFI. I have to stand squarely behind my

A C O U N T Y Galway Vintners Federation of| Ireland meeting will be held on Monday in the Ardilaun Hotel at 8.30pm to discuss the smoking ban. TDs and ministers from each party will be in attendance to discuss the ban which is set to be implemented on January 1 2004.

To hear how the 'Just4weeks" programme, which is supported by many Doctors, has changed the lives of 1000s and could change yours too, spare an hour, bring a friend & come to one of the following presentations Monday 13th Oct Clybaun Hotel, Galway - 8pm Tuesday 14th Oct Menlo Park Hotel, Galway - 8pm