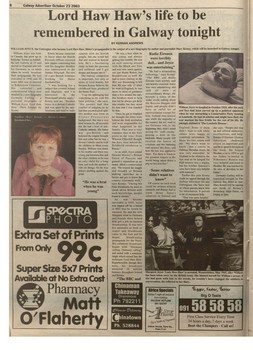 r e m e m b e r e d
William Joyce was born in Canada, but grew up in Rutledge Terrace in Salthill. He left Galway at IS and moved to England and left for Germany as an adult where he would broadcast Nazi propaganda. He was executed in 1946 and 30 years later was re-interred in Bohermore Cemetery. His colourful and controversial life is now detailed in a new biography Germany Calling - a personal biography of William Joyce 'Lord Haw Haw' (New Island) by Kenny. Kenny became interested in Joyce when the British Records Office released new papers concerning him and his daughter Heather was interviewed in the Sunday Telegraph. The idea of a pro-British Irishman working for Hitler fascinated her. "I was looking for a subject that covered Ireland and England, and I'm interested in the Protestant/Catholic angle," Kenny told me. "Heather Joyce is a devout Catholic and was upset by his antiSemitism and tried to make -- Jovee's amends with the Jewish people, but she loved her dad and wanted to honour him. H e ' s a fascinating study in both the personal and political and I got deeper and deeper into it." The Galway connection is important, not only in terms of local history, but because Kenny believes his childhood here produced the future Nazi. "I say his upbringing had something to do with his later politics," she says. "His parents had that conflict of religion, so he had that psychological split. His mother was from an Ulster-Protestant background. She was a very kind woman by all accounts but she had a kind of antiCatholic attitude. His father was pro-British and believed the empire brought law and order but he was a devout Catholic and he took the children to Mass every Sunday. William was closer to his mother and there was a long gap between him and the other children so he was an only child for a long time and took his mother's side on things. So he was always pushing against the grain.

i n G a l w a y
BY KERNAN ANDREWS
"He was a brat when he was young and always getting into trouble. He was an eejit running around with the Black and Tans and was very much against, not just Home Rulers, but Republicans as well. He had to leave Galway as the IRA was threatening to kill him. He was only 15 when he went to England, he was more in need of guidance than a box around the ears. His brothers tried to help him but he always got them into trouble but they stood by him and I was touched by that. "Once he got to England he thought the Jews were behind the Irish revolution and were responsible for what happened to his family. That was a very common idea in the Tory press at the time. Even Winston Churchill thought the Jews were behind the Bolshevik revolution in Russia." As an adult, Joyce joined Oswald Mosley's British Union of Fascists and gained a reputation as an orator, albeit a controversial one. "He toured the length and breadth of Britain making speeches as a fascist and got to know the country extremely well," says Kenny. "During his Nazi broadcasts he used to speak about Britain with such k n o w l e d g e , people found it sinister." As war became inevitable in 1939, Joyce was tipped off by a friend in MIS that he would be interned. He and his wife Margaret went to Germany and friends there helped him get a job in German broadcasting. It was here his aptitudes as both an orator and broadcaster came to the fore and he began broadcasting propaganda for the Nazis. His infamous broadcasts began with "Germany calling, Germany calling" and ended with a notorious laugh which earned him the nickname Lord Haw Haw. Reprehensible though they w e r e , his broadcasts attracted 16 million listeners throughout Ireland and Britain.

of a new biography by author and journalist Mary Kenny, which will be launched in Galway tonight.

Radio Eireann were terribly dull... and Joyce was entertaining"
"He had a tremendous following," says Kenny. "The BBC and Radio Eireann were terribly dull and heavily censored. Joyce was very entertaining and said all sorts of extraordinary things. He brought a sense of the wider world, talking about the Russian Steppes and Japan, and people didn't have an awful lot of entertainment except for him. Ireland was neutral and while the majority of the country did not want to see Germany win, in the beginning they didn't mind seeing the 'auld e n e m y ' getting a kick in the backside. Many people still recalled the horror of evictions and the battering ram against the door, and how the law was applied to them. For them to listen to the greatest empire in the world being taken down a peg or two was fun."

tut nor Mar kinn fascinated her.

William Joyce in hospital in October 1924, after his neck and face had been carved up by a political opponent when he was stewarding a Conservative Party meeting at Lambeth. He had 26 stitches and might have died: the scar marked his face lividly for the rest of his life. He jokingly dubbed it 'The Lambeth Honour'.
England. Some of them didn't want to talk while others were happy to contribute information. "In Mayo his first cousin told me ' W e ' d o n ' t want to k n o w ' , but a cousin in Galway, Brendan Joyce, he was very amenable. In England to be related to the last man to be hanged for high treason was a stigma, but his brother Quentin's sons have been very helpful with material." Earlier this year Kenny made an appeal through the Galway Advertiser for any Galwegians who knew him or whose parents knew him for information. It proved to be of enormous help. "That was quite helpful," she says. "People did ring up and offered memories, recollections, and help. Ronnie O'Gorman [Galway Advertiser chairman] played an important part and he is quoted throughout the book. He helped Heather a lot in 1976 to get her father re-buried in B o h e r m o r e . Ronnie was very helpful and kind to Heather. He was touched by the idea of devotion to her father." Germany Calling will be launched tonight in The Galway Bay Hotel at 7pm. Mary Kenny will be signing her book in K e n n y ' s Bookshop, High Street, on Friday at 1pm.

"He was a brat when he was young"

Margaret Joyce 'Lady Haw-Haw' is arrested, Wassersleben, May 1945, after William has been taken away by the British army. She blamed herself for William's arrest: if she had gone with him to the woods, he wouldn't have engaged the soldiers in conversation, she reflected in her diary. Africa Specials Kenya 7 night all inclusive
from945pp

First Class Service Every Time 24 hours a day, 7 days a week Beat the Clampers - Call us!