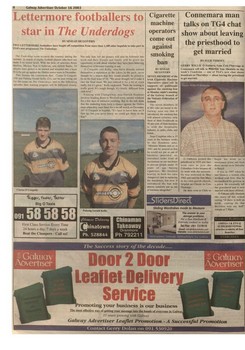 BY SINEAD MCGOVERN TWO LETTERMORE footballers have fought off competition from more than 1,100 other hopefuls to take part in TG4's new programme The Underdogs. The Underdogs team scoured the country during the summer in search of Gaelic football players who have not made it to senior level. With the help of selectors Brian Mullins, Mickey Ned O Sullivan, and Jarleth Burns, 24 players were picked to be trained and moulded into a team fit to be put up against the Dublin senior team in December. This Sunday the Lettermore duo, Ciaran O Congaile (19) and Padraig Gerald Kelly (21), can be seen trying out for the team on The Underdogs, and in the following episodes their training progress will be followed closely.

Lettermore footballers to star in The Underdogs

Not only that, but the players will also be followed into work and their friends and family will be given the opportunity to talk about whether they have been behaving themselves in between training or not. BY SINEAD O Congaile and Kelly, who have already earned MCGOVERN themselves a reputation as the jokers in the pack, never thought for a minute that they would actually be picked to SEVEN MEMBERS of the be on the final team of 24. "We never thought we'd make it Irish Cigarette Machine into thefinalteam. We just entered it for a bit of crack Operators came out in really, but it's great," Kelly explained. "Now the training is support of publicans really good. It's tough though, it's totally different from against the smoking ban club level." at Monday night's meeting Training with Claregalway man Patrick Stephens of the Galway branch of involves heading down to Wexford every second weekend the Vintners Federation of for a few days of intensive coaching. But do the lads think Ireland. that the underdog team have a chance against the Dublin The seven members of team when they meet them for a on-off match on December ICMO who are based in the 14? O Congaile is hopeful; "It's hard to know how we'll Galway area say that if fare up, but you never know we could get them on the introduced, the smoking ban hop!" will almost certainly strip them of their livelihoods as 95 per cent of their business is with the hospitality industry, ie, pubs, clubs, and hotels. Sean Coughlan who is 1 5 years in the business works in the Renmore area; "Minister Martin met us in 2001 and he assured us that he would not put us out of business provided we introduce some kind of mechanism on our machines to prevent people under 1 8 years of age buying cigarettes. We invested heavily in both the euro changeover and in replacing the machines, but now if introduced the ban will almost certainly put us out of business altogether."

BY JULIE TIERNEY GERRY WILLIE 0 Fatharta from Cois Fharraige in Connemara will talk to Mairtin Tom Sheainin on this week's Comhrdm -- one of TG4's new chat shows broadcast on Thursdays -- about leaving the priesthood to get married.

6 Fatharta joined the priesthood in 1972 and then went onto to join the Columban Order because of its work with the missions. He was ordained in May 1982 and said hisfirstMass in his own parish church, Seipeal an Chnoic in Cois Fharraige. He then went to Chile to

Sliding Wardrobes made to Measure

begin his work as a missionary priest and from there moved on to Salvador in Brazil. It was in 1997 when he met Genecy, a woman who worked with him, that he reconsidered his position a s a priest. He eventually left the priesthood and is now married with three children. 6 Fatharta tells Sheainin the story of his ordeal saying "if there is hell on earth, coming to that decision was my hell" tonight at 7.30pm.

The Success story of the decade.
|