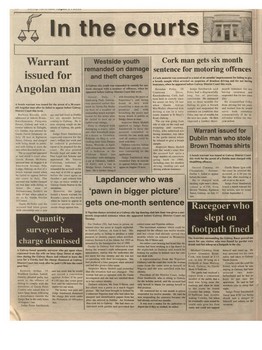 Warrant issued for Angolan man
A bench warrant was issued for the arrest of a 38-yearsold Angolan man after he failed to appear before Galway District Court this week. Barbosa Rozada, with addresses at Athens House, Knocknacarra, Fairgreen Hostel, Galway and with a former address in Tallaght, Co. Dublin, was arrested by Garda David Delahunty on July 28 last at Eglinton Street, Galway, and charged with being drunk in public and with failing to leave the area when directed to do so. The accused had appeared at last week's court after Garda Ronan McNulty arrested him on August 4 at Sherwood Avenue, Nile Lodge, Galway, on foot of a bench warrant issued when he failed to appear before the court in July. The accused was further charged on that date with failing to leave the area of Pollnarooma, Salthill, on July 19 last when asked to do so by Garda Declan O'Connor. Garda McNulty said the accused had been given Irish citizenship over a year ago and had lived in Dublin for six months before coming to Galway. He is now sleeping rough on the streets of Galway, the garda said. Judge Peter Smithwick expressed concern for the man's welfare last week and he ordered a probation report to be prepared for the court. He also granted Rozada legal aid under the Free Legal Aid Scheme and appointed Ms Valerie Corcoran, solicitor, to represent him. He remanded the accused on his own bail of 100 to appear before the court again on October 1 and ordered him to sign on twice weekly at Galway Garda Station in the meantime. However, the judge issued a bench warrant for Rozada's arrest this week when he failed to appear in court to answer the most recent charge against him.

Cork man gets six month Westside youth remanded on damage sentence for motoring offences and theft charges
A Galway city youth was remanded in custody for one week charged with a n u m b e r of offences, when he appeared before Galway District Court this week. Gerard Daly, 7 Gaelcarrig Park, Galway, was arrested earlier this week by Garda Pat Burke on foot of a number of outstanding bench warrants issued for his arrest after he failed to turn up at earlier court sittings. Daly is charged with damaging a stairs, table and other household items in a house at Glendara, Rahoon, on May 6: with stealing meat from Dunnes Stores, Westside, in April; with damaging the contents of a bedroom in the Clybaun Hotel last December, with damaging a car at Oaklands, Salthill, in April; and a van at Bridge Street, Galway, in June. He is further charged with breaching the peace at Supermac's and being drunk in July, with assaulting a man on the premises and with breaching the peace and being drunk in public at Bridge Street in June. Inspector Marie Skehill applied to Judge Peter Smithwick to have the accused remanded in custody for one week and said all matters could be dealt with then. Defence solicitor, Adrian MacLynn said his client was consenting to the application. Judge Smithwick then remanded Daly in custody to appear before the court again on August 19 next. Brendan Foley, 28 Courtown Drive, Knocknaheeny, Cork, had been held in custody since his arrest on July 24 last when Garda Adrian MacWalter observed him driving a car in a very erratic manner at St Mary's Road, Galway. The car was going from side to side on the road and stopping and starting. Foley, who admitted not having insurance, was taken to the garda station where he refused to give a breath sample. Inspector Marie Skehill told this week's court that the accused had quite a large number of convictions going back to 1980, including ones for drunken driving, stealing cars and driving without insurance. Judge Smithwick said Foley had a disgracefully long list of previous convictions. He sentenced him to three months for failing to give a breath sample and suspended the sentence on condition that Foley stay out of trouble for the next two years. He then imposed a further three-

A Cork motorist was sentenced to a total of six months' imprisonment for failing to give a breath sample when arrested on suspicion of drunken driving and for not having insurance, when he appeared before Galway District Court this week. month sentence for not having insurance and suspended that for two years also. He disqualified Foley from driving for ten years and warned him he would serve both sentences consecutively if he re offended within the twoyear period.

Warrant issued for Dublin man who stole Brown Thomas shirts
A bench warrant was issued at Galway District Court this week for the arrest of a Dublin man charged with shoplifting offences. Gerard Conway, 44 Champions Avenue, Dublin 1, failed to appear before the court. He is charged with stealing eight men's shirts, valued at 7 5 0 , from Brown Thomas, Eglinton Street, Galway, on July 31 last. Garda Shane Igoe told the court he arrested the accused, at 4.30 pm on that date after receiving a call to go to the store. Judge Peter Smithwick issued a bench warrant for his arrest, not to issue before September 1.

Lapdancer who was 'pawn in bigger picture' gets one-month sentence
A Nigerian dancer arrested at a Galway city lap dancing club last June was given a onemonth suspended sentence when she appeared before Galway District C o u r t on Tuesday. Ese Osahon (20), had been in prison on correct name and Nigerian address. remand since her arrest at Angels nightclub The maximum sentence which could be in Salthill, Galway, on June 6 last. She imposed for the offence was twelve months pleaded guilty to failing to produce a valid and her client had already served two passport or identity papers when arrested, months while on remand in Mountjoy contrary Section 6 of the Aliens Act 1935 as Prison, Ms O'Brien said. amended by the Immigration Act of 1999. An earlier court hearing had heard that the Gardai in Galway had objected to bail woman had been working as a lap dancer in during the woman's eight subsequent court the nightclub in Galway and would be appearances, stating that the authorities did looking for asylum in Ireland once her case not know her true identity and she was not was dealt with. co-operating with their investigation. She A representative from the Nigerian had produced a false passport when arrested Embassy told the court this week the woman and had also given a false name. came from the same area as herself in Inspector Marie Skehill said yesterday Nigeria and she was satisfied with her that the situation had not changed. The identity. woman had not co-operated with the Garda President of the District Court, Judge investigation and she had not satisfied them Peter Smithwick, who is sitting in Galway as to her correct identity. for the holiday period, said the accused had Defence solicitor. Ms Joan O'Brien, said only herself to blame for putting herself in her client was a pawn in a much bigger that position. picture. She had been brought to Ireland by He sentenced her to one month in prison a unknown Nigerian man who had taken her suspended for twelve months. He said he passport and identification papers from her was suspending the sentence because she after she arrived in Dublin. An Irishman had already served two months. then took her to Galway. She had since co It was now a matter for the authorities to operated with gardai and provided her deport her if they so wished, he added.

Quantity surveyor has charge dismissed
A Galway based quantity surveyor who got upset when separated from his wife on busy Quay Street at night time during the Galway Races and refused to leave the area for a Garda, had the charge dismissed a t Galway District Court this week after he paid 150 into the court poor box. Kenneth Arthur, 55 Windfield Gardens, Salthill. Galway, pleaded guilty last week to the offence of failing to comply with the directions of Garda Peter Conlon who asked him to leave Quay Street, following a disturbance outside the Quays Bar in the early hours of August 1 last. Judge Peter Smithwick said last week that he would not record a conviction against Arthur if he paid 150 into the court poor box and he adjourned the matter for one week. The money was paid and Judge Smithwick dismissed the charge this week under the Probation of Offenders Act.

Racegoer who slept on footpath fined
The festivities surrounding the Gatway Races proved too much for one visitor who was found by gardai very drunk and fast asleep on a footpath in the city. Michael Crowley, from Lower Glanmire Road, Cork, was found at 3.15 a.m. on July 30 lying on a footpath at Sean Mulvoy Road, Galway, by Garda Mark O'Sullivan. The garda had received a report from a concerned member of the public that a man was lying near the roadway and when he went to the scene he found Crowley fast asleep. Garda O'Sullivan had trouble waking Crowley, but when he eventually came round he could only give his first name and could not support himself and stand up. He was arrested for his own safety and taken to Galway Garda Station. Crowley told the court his friend, with whom he was staying in Galway, had been arrested two hours beforehand and he had no keys to get into his apartment. He said he had nowhere else to sleep that night. Judge Peter Smithwick fined him 5 0 for being drunk and a danger to himself and others on the