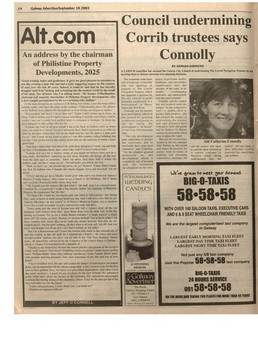 Att.com
A n address b y the chairman of Philistine Property Developments, 2025
"Good evening, ladies and gentlemen. It gives me great pleasure to introduce to you this evening a m a n who has had a truly staggering impact on this country of o u r s over t h e last 4 0 years. Indeed, it could be said that he h a s literally dragged 'ould E r i n ' kicking and screaming into the modern world by the scruff of h e r neck. You all know who I ' m talking about - M r Seamus ()'Backhander, chairman a n d majority shareholder of Philistine Property Developments, who is here tonight accompanied by his r-r-r-avishing wife, Delilah." (A big man dressed in an expensive if ill-fitting suit stands, scans the room with a cunning smile, and takes his place at the podium. O'Backhander places his glasses on his bulbous nose, adjusts the microphone in front of him, and begins to speak.) "Howya doin' out there? Can ya hear me? 'Cause I ain't gonna say it twice, ya know. Time is money and if I had to repeat something everytime some bozzo said he couldn't hear me I coulda built another hotel or restaurant or boutique. So listen up, guys and gals! or take a hike! Ha! ha! ha! "Lemme say first of all how proud I am to be back in Galway after so many years. As some of ya know, I went to university here. And I can swear to ya with my hand on the place where they tell me my heart Usta be - ha! ha! there's a little joke for ya! - that I made up my mind as soon as I saw that crummy college building that one day I was gonna knock that sucker down and use the materials to build a damn good hotel. "And that's what 1 did! And whad I do with them old stones? I took 'em and built my first O'Backhander Hotel, that's what I did. And I've never looked back! "Lemme give ya a bit o' history. Some of you might not believe there usta be a lotta really old buildins' cluttering up this town. Horrible old things, all the way from the dark ages or somethin'. Takin' up space, they were. Full o' rotten old timbers, ugly old bits o' stone carvin'. 'Twould make you sick to see 'em. "Well, ya don't see 'em around any more, do ya? Nosirre! 'Cause when I made my first 10 million euro I bought the whole friggin' town and knocked 'em all down! "O boy! did that get those bleedin' hearts goin' who said 1 was destroyin' history! History'.' I make history! Who wants to see a bunch o' old buildings, full o' damp and wood rot? Practically fallin' down, they were. "Ok, I grant you the tourists like that kind o' old stuff. And I'm a businessman. I'd better be, or somebody's made a big mistake makin' me chairman of Philistine Property Developments! Ha! Ha! Ha! "So whad I do? I built my first theme park and called it 'Old Galway - the Virtual City', and, ya know, it made money hand over fist. And it still does, now that we got 'Galway Merchant' up and runnin' in St Nicky's Medieval Casino, not to mention 'Live Like a Lord' in Leapin' Lynch's customised castle and disco. "Forty years ago the west of Ireland was still full o ' farmers doin' all the old fashioned stuff farmers been doin' since Brian Boru took his little lady to the big shindig at Clontarf. Do ya see a single farmer nowdays? A single tractor? a single slurry pit? Of course ya don't. Farmers in modern Ireland? You gotta be jokin'! All those crummy little fields, they never made any money anyway. And after the EU stopped payin' 'em for doin' nothing, all they want to do was sell 'em off. And you know who bought 'em all up. don't ya? You're lookin' at 'im, baby! "But I'm a businessman and I know the tourists who come to this emerald isle of ours like lookin* at that old stuff. So 1 rounded up a bunch o' the oldest and most decrepit-lookin' farmers and gave 'em all jobs in my "Old Time Farming" theme parks, all generously subsidised by the Congress of the United States of Europe which, o' course, I'm honoured to be a member of. "Thanks to me Ireland has become the tourist playboy playground of the western world. Golf courses! Trad discos! Gambling casinos as gaeilge! James Joyce cycling tours! William Buder Yeats fairy stalking expeditions! Great Famine theme parks with genuine starving peasants! And, most important of all, lots and lots of new hotels! "I have scrubbed away the past and created the future! Archaeologists are hunted down. Environmentalists fill the labour camps doin' a day's honest work for the first time in their pathetic lives. An Taisce is a proscribed organisation. And when I hear the word 'architect', I reach for my revolver! In the new Ireland, EU subsidised poets write epics about the heroes of the economy. EU subsidised playwrights celebrate the stirring drama of the enterprise culture. I say. let the past get out of the way and make way for the future. "Ladies and gentlemen, 1 won't thank you: you thank me!" (Thunderous applause follows)

Cor rib trustees says Connolly
BY KERNAN ANDREWS A LABOUR councillor has accused the Galway City Council of undermining The Corrib Navigation Trustees by not meeting them to discuss concerns over planning decisions. The comments came from Aid Catherine Connolly who was speaking in support of The Corrib Navigation Trustees, which has appealed a decision by the city council to grant planning permission to a development in Henry Street and New Road. Connolly and the trustees have been bitterly critical of the council lor granting permission even going as far as saying the development is "in breach" of the City Development Plan. "The city development plan undertakes to protect the waterways and in particular their semi rural character," says Connolly. "Yet the planners granted permission to this development which is completely out of keeping with the residential development in the area, poses significant traffic problems, and encroaches significantly onto the amenity of the canal in its height, overhanging balconies, and entrance/exit onto the canal towpath." Connolly said the council has not worked with the trustees "in any constructive way" to enable them to protect their property. She has accused the council of undermining the trustees and said planners have retused to meet the group and its engineer to discuss various developments which abut or adjoin the canal. She says the trustees have written to the city manager John Tierney in this regard and unless he resolves the matter both in terms of staffing and arranging constructive meetings, she

Aid Catherine Connolly
said the trustees will "have to consider their situation as it cannot continue to function while being undermined buy the council". She says many of these difficulties could be resolved if the council had a city architect.

Just the Popular U O