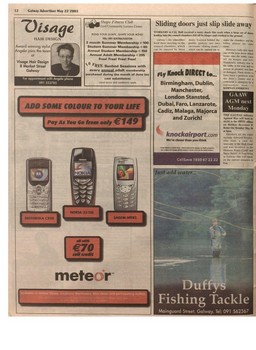 Sliding doors just slip slide away
WORKERS in City Hall received a nasty shock this week when a large set of doors leading into the council chambers fell off its hinges and crashed to the ground. Galway"s city councillors hold their meeting in the council chambers, which can be entered by three doors. Located behind the make the chambers and the public gallery are two lobby almost the same enormous 'sliding doors', room. which can be opened out to However, early this week one of the large doors which fronts onto the lobby came off its hinges and fell. Thankfully nobody was in the lobby at the time and no person or property was hurt or damaged. There seems to have been a problem with the d o o r ' s frame and a contractor is arranging for a replacement door. -- KERN AN ANDREWS

ADD SOME
Pay As

COLOUR
You 6c horn only

GAAW A G M next Monday

T H E GALWAY Alliance Against War will hold its AGM in the SIPTU offices on B o t h a r B r e n d a n 6 Hehir On Monday May 26 at 8pm. Speakers on the night include Edward Horgan. We're closer than you think who took a case for neutrality to the High Court and was Some flights summer onfy - check website for details. As flight schedules involved in the are subject to change phase contact carriers directly for confirmation. Shannon Peace Camp, and Nuria Dunne, an Iraqi living in Galway. She will speak on the current situation in CallSave 1850 67 22 22 Iraq