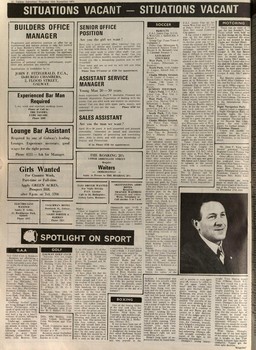 SITUATIONS V A C A N T -- SITUATIONS V A C A N T
BUILDERS OFFICE MANAGER
P r o g r e s s i v e and attractive position on offer for an e x p e r i e n c e d and mature person to take full control of a busy Builder's Office in G a l w a y City. A p a r t from capacity to handle all aspects of the accountancy functions of the business, the applicant must be a d e q u a t e l y conversant with m e a s u r e m e n t , bills of quantities, etc. so as to ensure overall liaison and control. Q u a l i t i e s of personal integrity, self-reliance, exper ience and ambition are essential. A p p l i c a t i o n s in confidence to : --

SENIOR OFFICE POSITION
Are you the girl we want ?
Have you a good general office training? Can you deal with all debtor and Creditor accounts? Are you familiar with filing, P.A.Y.E., and Bank account? Can you allot work to other office staff? Can you oversee and guide them in that work? Can you accurately produce monthly results from your office? Would you like a demanding position and be well rewarded? Then come and see us and we will tell you what we have to offer. Phone Tom O'Connor at 4720 for appointment.

ASSISTANT SERVICE MANAGER
Young M a n 20 -- 30 years.
Some experience R a d i o / T V . desirable. Pleasant and likeable disposition. Experience of dealing with the public. Can you allot work and control its implemen tation? Can you deal with spare parts, supply, and ordering? If you are the man . . . Phone 4720 for appointment.

SALES ASSISTANT
Are you the man w e want ?
Aged 20 -- 30 years. A well presented and pleasant personality. Interested in sound and electronic equipment. Capable of generating and concluding sales. Able to drive, and with some knowledge of Display and Promotions. If so, Phone 4720 for appointment.

F.A.I. Junior Cup tie be tween West Utd. and U.C.G at Fahy's Field at 2.15 and three first round Connacht Cup games. A big crowd is expected to turn up for the replay at Fahy's Field for what should be another great cup tie be tween the students and West College had the better of the exchanges territorially on Sunday but they will again find it difficult to overcome this sound West side. How ever I give College the vote to advance to the third round. Game of the day could well be the Connacht Cup clash between Salthill Ath. and Bohemians at South Park at 11.30 T h e unbeaten seasiders face their toughest assign ment of the season in this game as in Bohemians they meet a side with the best Connacht Cup record in the province. Salthill expect to have Don Lillis back on the team after injury but the Reds will be without Martin Keady who is suffering from a knee injury, however good news for their supporters is that Damien Bradley expects to be fit for the match. T h e form book indicates another win for the seasiders but I fancy Bohemians to bring off a surprise victory in what should be a great cup game. Old rivals Mervue Utd. and Hibernians meet at West Park at 11.30 in what should be another fine cup tie. The Bohermore side have not been playing well this season but I expect them to show improv ed form on Sunday and qualify for the second round. Tuam Town had their first win of the season in the Young Cup League last Sunday but I doubt if they can surprise O.L.B.C. when they meet at West Park at 2.15. T h e Columban Hall side have lost only one game this season and I expect them to advance to the second round with a comfortable win. In the Pierce Cup (League Div. 2) Decspo and St. Bernard's Utd. should collect the points from their games with Cluain Mhuire and Athenry Town respectively.

There was an entry of 15 cars for last Sunday's Test Trials which were held on' the Red Bridge lay-by. Bryan Brophy organised the event and he was assisted by Brid Clarke and Michael Healy. T h e winner of the event was Dermot Carnegie 531.3 marks, in his team Castrol Cooper S. He had fastest | time on six of the twelvei tests. In second place was; John Lyons 546.7 marks, in his Cooper S. Lyons also won the class for saloon cars, front wheel drive and over lOOOcc engine. In third place overall was Frank Lenehan in his Cooper S with 568.7 marks lost. Ray Murphy competing in his BMC Mini Clubman won the class for front wheel drive cars up to lOOOcc engines. He beat Dubliner Paul Phelan by only one tenth of a second for first place. T h e novice award was won by Vincent Fox in his Ford Cortina. T h e awards were presented to the winners in the International Hotel, Salthill. Night Navigation Rally Eamon Cotter is organising a Night Navigation Rally on Saturday night, the 24th November. Sheets 11 and 14 are required. The start will be at the Hession Bar, Claregalway. See next week's papers for further details. Christmas Dinner Tickets will shortly be available for the club's Christmas dinner on Friday, 7th December, in the Salthill Hotel. Mr. John F . King newly elected president Galway Regional Council Pioneer To tal Abstinence Association. Other officers elected at the Annual General Meeting held last week-end were: VicePresident Miss Nancy Owens; Hon. Secretary John Gilmore; Hon. Treasurer Sr. Agnes, Presentation Convent, Oranmore. Central Council Delegate Mrs. Nellie Law less. Arrangements are being made to mark the seventyfifth anniversary of the found ing of the Pioneer movement on December 27th next.

SPOTLIGHT ON SPORT
GOLF
New GAA Club in Renmore Renmore are afhaliating a lunior football club for 1974
Stadium. I understand that Heffernan was actually asked to go easy on Byrne. T h e first round started off with both boys being very cau tious and the first punch that Heffernan really let go was a right and left hand combina tion to Byrne's head which landed him on the ropes. T h e referee had started to give him a count of eight but when One of the boxing fiddles he got as far as two the cute of the year took place last Byrne shouted "Ref., watch Friday night in the National his head," holding his own Stadium. Mick Scott, the head with his gloves. Without Tipperary light middleweight hesitation the referee walked cried off at the last minute in over to Heffernan and gave his match with M. J. Heffer- him a public warning. They nan, Olympic B.C. boxed on and the next move It was to have been one of Michael John made was the main bouts of the Garda another left and right com tournament and in order not bination which opened a cut to disappoint the boxing fans over Byrne's right eye and they asked Heffernan would swelled his left eye. he box the 50 year old Ollie Byrne's long years of ex Byrne, who is a great draw and very popular in the perience when he found him

self in trouble so soon again paid off, because he called to the ref. again "watch his head" and the referee once again gave Michael John a public warning. After that Heffernan was afraid to hit Byrne in case he would be disqualified and then sus pended. The majority of the crowd were shouting to the referee to stop the fight but the referee let it continue to the end and Byrne got the verdict on a split decision. Two of the judges gave it to Byrne and one gave it to Heffernan. Olympic's Presi dent, Joe Canavan, immedi ately lodged a complaint with the I.A.B.A. over the scan dalous decision and over the bad refereeing. Olympic offi cials strongly contradict the report of the fight in the morning newspapers. Olympic's young heavy

weight Tony Martin boxed T o m O'Brien, Garda B.C. T h e first round was a good, hard fought battle, O'Brien being slightly ahead with his crisper punching but in the second round Martin landed a combination of left and right hooks to O'Brien's head which put him out for the count. Olympic's Joe Hernon was to box a novice B. Mad den, Templemore B.C., but when he climbed into the ring (for the second fight of his career) he found that former Irish juvenile star J. O'Leary, Wexford, was his opponent. O'Leary's exper ience was too much for young Hernon so the referee wisely stopped the contest. Brian Quinn, Olympic, boxed one of the best fights of his career when he stepped up a weight to box Tom Tipper, Leinster light middle champion. Tipper got the close split decision. 'Ringsider'