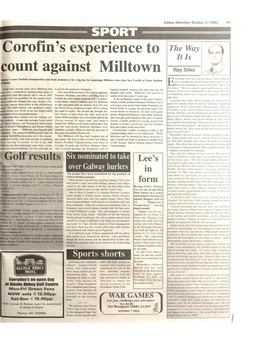 Corofin's e x p e r i e n c e t o count against Milltown
Sunday's senior football championship semi-final promises to be a big day for underdogs Milltown when they face Corofin at Tuam Stadium (3.30pm). It had been several years since Milltown had even won a competitive championship game at senior level until this season, and it was in 1992 that the club last qualified for the quarter-finals. Yet so much has changed this year, despite a los ing start against Moycullen in the preliminary round. The north Galway side produced a sensa tional victory over NUIG in the first round which kickstarted a most successful season. Following their victory over the Galway col lege students - a team that included Laois senior star Darren Rooney and Westmeath inter-county duo of David O'Shaughnessy and Dessie Dolan, and a host more - Milltown were buoyed with confidence. The unfancied Milltown side went on to dump Salthill/Knocknacarra out of the champi onship in Corofin, with John Devane in sparkling form, scoring six points. It was a day that Milltown lost their influential centre back, county minor star Darren Mullally, but they still held out to win by the narrowest of margins. After that Milltown had to face near neighbours Dunmore McHales, and after a pulsating hour of football the sides ended deadlocked at 1-8 apiece. Cathal Blake scored a brilliant goal for Milltown to take one-point lead six minutes from the end, but David Glynn produced a super effort to bring the game to replay. The second day brought fur ther drama as nine times the sides were level before Milltown edged into a two-point lead in the closing minutes of injury time. Just when it looked like Milltown had finally broken their way into the semi-finals, Dunmore McHales were awarded a penalty. However with the last kick of the game the penalty blazed wide. Now Milltown will face their toughest test of the season. The boys in blue lost their last Galway Senior Football Championship semi-final to Corofin 10 years ago in Tuam Stadium. Since then Corofin became the dominant club in Galway football, winning five titles and one All Ireland Club crown. Milltown's last success at county level was some 21 years ago. In the preliminary round of this year's champi onship Corofin defeated Dunmore McHales, but it took injury-time points from Aidan Donnellan and Derek Reilly to avenge the previous year's first round defeat to Dunmore. In their next game against Kilkerrin/Clonbern a lack-lustre perform ance was just good enough to eke out a two-point victory. Corofin produced a strong second half display to secure a good win over An Cheathru Rua and a place in the semi-final. Corofin have a habit of putting it right as the championship draws to its conclusion. While Milltown will be boosted by their successes to date, Corofin are likely to advance to another final of the Tommy Varden Galway Senior Football Championship.

The Way It Is
Ray Silke

over Galway hurlers
Six people have been nominated for the position of Galway hurling manager. Most people expected that outgoing manager Noel Lane and Galway's most successful hurling captain Conor Hayes would be the only names on the list, but four others have joined the fight to take over the county's senior team. One of those is former u-21 manager Brendan Lynskey, while another is former senior manager Mattie Murphy. However there were also two suprise names. Gerry Fahy from Oranmore/Maree, well known as a football coach, has been nominated. Fahy has carried out tremendous work in Oranmore, and served Galway football with Val Daly prior to John O'Mahony's reign. The sixth nominee is former Clare hurler Sean Stack . Whether or not the Galway Hurling Board would give the job to another person from outside the county is difficult to call. Stack was an outstand ing hurler for Clare, but his tenure in Clare management was brief. Stack has also worked with many clubs and has been involved with Toomevara in Tipperary. It is believed some of those nominated will not allow their names to go forward for election. Lane and Hayes remain the front runners, but the introduction of other can didates has certainly added more interest to the forthcoming election

in form
Boxing Club's Thomas Lee was one of only three Irish winners in a senior international tournament against Hungary held in Co Tipperary's Templemore Garda depot recently. Hungary won the tour nament by six bouts to three, but Thomas Lee helped the Irish with his victory over Otto Mussc in the flyweight division. Lee took the fight by 28 points to 21 over four rounds. His opponent Mussci had defeated last season's Irish senior final ist Darren Campbell earlier in the week. To add to his achieve ment, Lee was also award ed the best overall boxer of| the night. Meanwhile clubmate Marvin Lee has been selected on the Irish senior team to box against Scotland in Fife on November 22 in the mid dleweight division.

some 200 clubs around the country were visited and considered for one of the five national awards. Representatives from the club will travel to Dublin on Thursday to attend the awards ceremony in the Fitzwilliam Tennis Club.

verybody who has seen the movie Gerry Maguire will remember the line that Tom Cruise used to sym bolise the modernity of sport in the USA: "Show me the money." He was a player's agent and he was on a per centage of the fee he negotiated for his client. Thus his overwhelming desire was to increase a player's valuation and salary. I recalled this scene when watching the Aussie rules game last Sunday. Here we had our amateurs competing against the best of Australia's professionals. They get $120,000 a year, while Padraic Joyce, Derek Savage, Declan Meehan, and Joe Bergin get the honour and the glory, a few All-Ireland medals and a pat on the back. Peter Burke (Mayo) doesn't even get the medals by virtue of his geographical disadvantage. Alternatively you hear scur rilous stories about players - the majority of which are com pletely untrue. But "sure, when did the truth ever get in the way of a good story"? Personally I am not in favour of direct payment to play ers. Good expenses yes, travel, medical, no loss of wages, etc. But direct payment goes against the grain to a certain degree. What about the club person who invests his/her life for the good of the association. What is his/her worth? Put a valuation on his/her lost earnings? That said, the rubbish we have seen in the past few weeks in Kilkenny would make you wonder about where all the money goes. The All-Ireland hurling champions raced against each other at the local greyhound track in a fund raising effort for their holiday to South Africa. Henry Shefflin, the best centre forward in the game, pointed out recently: "In 2000, after winning the All-Ireland, we sold team photos to raise funds, but you're going back to the same people all the time. In 1992 some of the lads were actually standing outside Nolan Park after club games with buckets, collecting money." This isn't good enough and the least teams deserve is not to have to prostitute themselves in order to have a good holiday after a season of effort and putting bums on GAA seats. As Shefflin said: "Ten years on, nothing much has changed. You now have fellas running around dog-tracks trying to raise a few bob to go on a holiday." I am not advocating here that the entire onus should be on county boards to finance this expense. Central council should allocate sufficient funds so that the last four teams in the hurling and football semi-finals receive substantial monies towards a holiday or whatever is decided by the panels, in conjunction with the relevant board. Danny Lynch, the GAA spokesman, defended the GAA's policy by commenting: "It's all coming out of the one pot, no matter what way you look at it. What people should not overlook is that all monies that accrue to the GAA goes! back into the association in some form or another - games) development, games promotion or whatever." The promotion of our games, especially among our youth, is not advanced by the disillusionment of the top stars in hurling and Gaelic. DJ Carey, Andy Comerford Kieran McGeeney, and many others have pointed out they are not advocating pay per play. However they want an acceptance that the effort put in by inter-county players now is so serious and professional that they don't expect to be running around greyhound tracks scrounging up a few quid to go on holiday. I believe it is quite a reasonable point of view. Do you? How many of us watch the big GAA games on TV with| the volume turned down and listen to Michdal 6 Muirchcartaigh on the radio. Why do we do this? Listening to the pedestrian drone of Ger Canning must be a key fac tor. Next Sunday listen in and compare his style with that ofj TV9's commentator. Eddie Maguire. Maguire is passionate ind injects pace and excitement to his voice as required, "ork's Canning is lethargic and reminds me of what a tired

adventure floors of Ireland at night, Pat interested is if Cork are
nuinely ten did