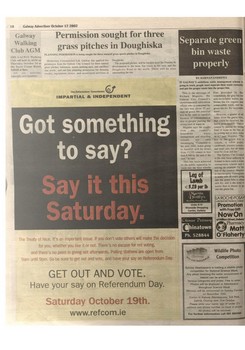 Permission sought for three grass pitches in Doughiska
PLANNING PERMISSION is being sought for three natural grass sports pitches in Doughiska. Mclnerney Construction Ltd, Galway has applied for permission from the Galway City Council for three natural grass pitches, entrances, access parking area, and ancillary site works, and out line planning permission for dressing rooms, equipment stores ,and associated services at Doughiska. The proposed pitches will be located amid the Fearann Ri development to the west, Tur Uisce to the east, and the Doughiska Road to the north. There will be trees surrounding the site.

THE GALWAY Walking Club will hold its AGM on Thursday October 24 at the Sacre Coeur Hotel, Salt hill at 8pm. All are welcome, especially new members.

Separate green bin waste properly
BY KERNAN ANDREWS IF GALWAY'S ambitious waste management scheme is going to work, people must separate their waste correctly and put the proper waste into the proper bin.

Got something to say?

This is the message of Richard Maguire, the Galway City Council's environmental education officer, who is concerned by the fact that about 25 per cent of green bin material has to be sent to landfill because of contamination due to people putting the wrong kind of waste in. Maguire says the results from the council's household waste management and recycling scheme are very encouraging. "Compared to the year 2000, waste going to landfill will be down from 17,530 tonnes to less than 8,500 by the end of the year," he said. This has been achieved by the public separating its waste into the three wheelie

bins provided by the corporation; the grey bin for non-recyclable waste, the brown bin for organic and compostible waste, and the green bin for dry recyclable waste. However, a quarter of all items from the green bins, that could be recycled, has had to go to landfill. "This is caused by putting the wrong ' kind of items in the bin, or by putting wet or dirty items in it," said Maguire. "The key to the green bin is simple, it takes paper, cardboard, plastics cartons, and food cans, but all items must be clean and dry." The Galway City Council is the only local authority in Ireland to have such a waste management scheme and is setting an example for the rest of the country. Maguire is encouraging Galwegians to make sure all waste going into the green bins is clean and dry and is the kind of waste that is meant to go into the green bin.

Satur
THE TREATY OF NICE. IT'S AN IMPORTANT ISSUE. IF YOU DON'T VOTE OTHERS W L MAKE THE DECISION FOR YOU, WHETHER YOU LIKE IT OR NOT. THERE'S NO EXCUSE FOR NOT VOTING, AND THERE'S NO POINT IN GIVING OUT AFTERWARDS. PILING STATIONS ARE OPEN FROM 9AM UNTIL 9 P M . SO BE SURE TO GET OUT AND VOTE, AND HAVE YOUR SAY ON REFERENDUM DAY.

GET OUT AND VOTE.

Have your say on Referendum Day.
Saturday October 19th.

Galway Atlantaquaria is holding a wildlife photo competition for National Science Week. Any photo involving the water environment of Ireland can be entered. Various categories and prizes. Free to enter. Photos will be displayed at Atlantquaria throughout Science Week. Winners will be announced on Sunday Funday on November 10th. Entries to Galway Atlantaquaria, Toft Park, Salthill. Closing date 31 st October. Please write your name, age (if under 21) address and phone number on back of photo. All photos will be returned. For further information call 091 585100