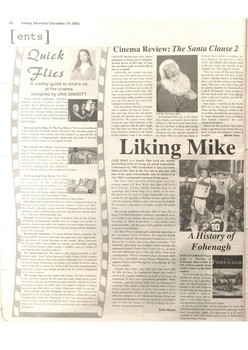 Quick ^Ucs
A weekly guide to what's on at the cinema compiled by U A SN O T N INT
SWEET HOME ALABAMA: Mindless romantic comedy in which a New York socialite (Reese Wilherspoon) attempts to lay her supposedly embarrassing redneck past to rest. Though mildly entertaining, this movie is predictable and relies heavily on stereotypes for humour. Witherspoon is good, though. THE LORD OF THE RINGS II: THE TWO TOWERS: The second instalment in the chronicles of Middle Earth is the last of the cinematic giants of 2002. A lengthy three hours, this film features an unusual mix of gripping drama, a disappointingly sudden end, and some of the best and worst CGI creatures to ever appear on film. HEY ARNOLD! THE MOVIE: Nickelodeon brings another instalment in the current spate of TV cartoon-inspired feature films. Arnold and buddies take on the might of industrialist America to stop their n e i g h b o u r h o o d being turned into an enormous shopping mall. Fans will love it. but this film has little to offer in terms of new ideas THE POWERPUFF GIRLS MOVIE: This film, devised a prcquel to the TV series, charts: the c r e a t i o n of the o d d - l o o k i n g superheroines who regularly save the world before bedtime. A good dose of) humour and some bizarre darker elements will keep grown-ups entertained, while kids love the non-slop action of the destructive do-gooders. LIKE MIKE: Banal basketball movie in which an orphan becomes an NBA pro after finding a pair of magic sneakers. Calvin (Lil" Bow Wow) finds a pleasing escape from his Dickensian life at the local orphanage when a floundering local team sign him up to boost ticket sales. A pleasant, but predictable, tale. ENOUGH: Jennifer Lopez plays a battered wife in this mildly entertaining, though hardly credible, story of revenge. J-Lo decides to become a martial arts expert and embarks on a one-woman mission to despatch hubby to the great beyond and free herself and her daughter from a life of tyranny. BOWLING FOR COLUMBINE: US satirist Michael Moore examines the reasons behind America's obsession with guns and. more importantly, the prevalence of violent shootings in the country. Moore lampoons the pro-gun lobby, most notably in a deeply uncomfortable meeting with Charlton Heston, while giving a credible voice to victims of shooting incidents and their relatives. THE SANTA CLAUSE II: Tim Allen is still jingling his bells in this belated sequel. Scott Calvin discovers a Mrs Clause in his contract which requires him to find a wife before Christmas Eve or relinquish his role as Santa. Meanwhile son Charlie is in trouble at school, and a robot Santa left to guard the North Pole develops megalomaniac tendencies. A good yarn though the plot may be a little complicated for its target audience. DIE ANOTHER DAY: Bond is back with a bang. The latest instalment in the franchise features all the traits that make Bond movies great. DIE ANOTHER DAY has North Korean supercriminals. outrageous stunts, miraculous escapes, incredible high-tech gadgets, lashings of cheesy innuendo, and Halle Berry in a bikini. What more could you ask for? HARRY POTTER AND THE CHAMBER OF SECRETS: The second film | adaptation of JK Rowling's hooks has arrived in a whirlwind of hype. Though darker than THE PHILOSOPHER'S STONE this film has plenty toj l offer in terms of humour and special effects. Harry and chums have to battle the forces of evil without getting into too much trouble themselves.

Cinema Review:
1 KNOW Hollywood feels u n d e r obligation to bring out a Christmasthemed movie at this time of year, but was there really no choice but to give us a sequel? Admittedly the original was quite clever and Tim Allen proved to his audience that he has some talent beyond his sitcom HOME IMPROVEMENT. But this just feels like we are covering old ground: Christmas just would not be the same without Santa Claus. This time we are going to lose our favourite white-bearded cuddly gentleman in the red coat if he doesn't get married by midnight on Christmas Eve. First time director Michael Lembeck tries to explore all sorts of "issues" like marriage break-ups and power corrupts and absolute power corrupts absolutely. He sugar coats them enough to make them palatable to the younger audience. But the adults might feel like they are being hit over the head with them. However to be honest all the audience want is the romance

The Santa Claus
football. But trouble is looming, the first cloud on the horizon is when Scott's son Charlie (Eric Lloyd), back in the real world, gets himself on ihe Naughty List. They checked it twice. the head elf Bernard (David Krumholtz) and his side-kick Curtis (Spencer Breslin) break it to Scotl that there is yet another clause to his being Santa. There has to be a Mrs Claus and he needs to find her by Christmas Eve or he'll "de-Santafy". Scott decides to kill two birds with one stone and go back to the real world to sort out his son and find a wife.s But Santa is needed at the North Pole too so they create a Toy Santa. When the Toy Santa get a hold of the North Pole rule book the power goes to his head. Meanwhile Scott is finding that human emotions are very complicated indeed. Watch for the moment when Santa needs to get back to ihe North Pole in a hurry an finds and alternative mode of transpor Michele Viney

and the Christmas glitz. Everything looks rosy at the North Pole. Santa, previously Scott Calvin (Allen), is the best-loved Santa ever; the elves are busy working and coming up with the cleverest and most inventive toys yet, and the citizens of the North Pole can still beat Santa at

Liking Mike
LIKE MIKE is a f a m i l y film w i t h t h e m i l d l y i n t e r e s t i n g twist of b e i n g all a b o u t b a s k e t b a l l . Unfortunately, N B A basketball is less fervently followed here than in the US, and in any case real fans of the sport will probably only be irritated by LIKE MIKE'S sentimental treatment of the game. The film's other ostensible selling point is its star, teenage rapper Li!' Bow Wow. who plays the film's hero C a l v i n . C a l v i n and his friends l i v e in an orphanage, but Calvin longs for a family of his own. His discovery of a pair of magic basketball boots once owned by the legendary Michael Jordan endows him with the uncanny ability to play sensational basketball. He becomes a star player overnight, despite his tender years. One of the problems with LIKE MIKE is that, like so many US films directed at seemingly spendthrift teens, it is stuffed with product placements galore. The hero w o r s h i p o f N B A basketball is s o m e w h a t more understandable, and the story itself could be touching if it wasn't so saccharine. Lil' Bow Wow is surprisingly somewhat appealing as the star-struck Calvin. However, his sidekick Murph (Jonathan Lipnicki. the bespectacled blond boy in JERRY MAGUIRE) is more a n n o y i n g than w i n s o m e . The unusually interesting cast of adults, which includes the underused Robert Forster and Crispin Glover, do their best but ultimately fail to lift LIKE MIKE from overt sentimentality. Morris Chestnutt plays the main adult character, basketball player Treacy Reynolds, and appears utterly bored throughout, even though he has his own subplot. Despite these flaws. LIKE MIKE isn't the worst film for kids out there. Its aspirational theme may strike a chord with younger audiences, as well as its focus on basketball. It does have occasional genuinely sweet moments, and the ending itself isn't as cloying as it could be. (The endless tying up of loose ends in HARRY POTTER AND THE SORCERER'S STONE was much worse.) More importantly perhaps. LIKE MIKE may serve as an effective antidote to ail Christmas-themed films and seasonal blockbusters which are currently everywhere. See it (with the family) if you're looking for nonfestive, feel-good nonsense. Katie Moylan

TONY O'GORMAN'S new book A HISTORY OF FOHENAGH, takes a look at |j this Galway parish from earliest times to the 20th century. The book looks the Dillon family, the House of Lords connection, the Land War. and the development of hurling in the area. Material for the book has been drawn from archival sources, contemporary press, private papers of the Dillon family, and anecdotal evidence from local sources.

A HISTORY OF FOHENAGH will be welcomed by many this Christmas and proceeds will go towards the upgrading of the local community centre. It is proceeds at 2 0 and is available at most retail outlets and at Joyce's Book Store. Dominick Street. Galway.