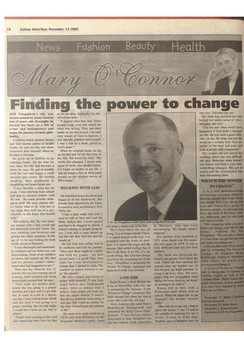 change
was nine, I became one, too." Her faith has enriched her and helped her make sense of life's struggles, she says. "I'm not sure what would have happened if God hadn't changed my life. He was such a good influ ence on me. He helps you see the world in a certain way. You are aware of the hurt and pain and look at people with compassion." Her mother did not attend her wedding which was very difficult, she says. However, when Karen's son Simon was born a year later, everything changed. She got in touch and the relationship has been blossoming since. W H A T IS T H E 'POWER TO CHANGE'

WHOLE LIFE CHANGED. I NEVER STOLE AGAIN OR BROKE INTO ANOTHER HOUSE. I ' D FOUND AN ANCHOR IN M Y LIFE. I WAS NO LONGER A BOY IN SHORT PANTS TOSSED O N THE MIGHTY W A V E S OF LIFE'S OCEAN."

SHOPLIFTING AND HOUSE BREAK-INS. " I WAS LITERALLY A M E S S FOR S I X YEARS. I WAS MITCHING FROM SCHOOL AND WAS IN CONSTANT TROUBLE WITH DIE LAW - THE USUAL JUVENILE DELIN QUENT STUFF. M Y POOR PARENTS D I D N'T KNOW WHAT TO D O WITH M E , AT ONE STAGE THEY TOOK M E TO A P S Y CHIATRIST I N THE H O P E THAT WOULD HELP." BUT NOTHING D I D . H E WAS HANG ING AROUND WITH A BAD CROWD AND HIS BEHAVIOUR JUST GOT WORSE. H E W A S S M O K I N G A N D DRINKING A N D GETTING INTO FIGHTS REGULARLY. A T THE AGE OF 1 2 , HE WAS LOOKING FOR HASH ON THE STREETS OF BRUSSELS. " I WAS DISTRAUGHT AND EMOTIONAL LY CONFUSED AND M Y BEHAVIOUR WAS DETERIORATING. N O N E OF M Y BROTHERS OR SISTERS HAD TURNED OUT LIKE THAT A N D M Y PARENTS COULDN'T U N D E R STAND WHAT HAD HAPPENED TO M E . " T H E N ONE DAY WHEN HE WAS IS H E KNUCKLED DOWN AT SCHOOL AND BEGAN TO DO HIS HOMEWORK. HIS

* Dr Joe Fitzgibbon credits Jesus with saving him from jail
STILL PLAYS A MAJOR PART IN HIS LIFE. "HE'S B E E N THERE FOR M E ALL

ALONG. I ' V E NO HOPE OUTSIDE CHRIST. I ' V E STARED DESPAIR IN THE FACE. I ' V E GRAPPLED WITH THE WORST OF DARK NESS. I ' V E TASTED THE ANGST AND THE NAUSEA, THAT AWFUL FEELING THAT IF THIS IS ALL THERE IS TO LIFE, IT'S NOT WORTH LIVING. BUT G O D HAS ALWAYS STAYED BY M E , REASSURING M E OF HIS LOVE." FITZGIBBON IS PROMOTING THE 'POWER T O CHANGE' CAMPAIGN AND BELIEVES IT IS THE WAY FORWARD.

AND HIS LIFE WAS FAST RUNNING OUT OF CONTROL, G O D REACHED OUT FROM HEAVEN AND RESCUED H I M , HE SAYS. " O N E NIGHT M Y MOTHER M E N TIONED SHE WAS GOING TO A PRAYER MEETING AND I JUST SAID I ' D GO WITH HER. IT C A M E AS A BIT OF A SHOCK, ONE DAY I WAS COMING HOME DRUNK A N D THE NEXT I W A S G O I N G TO A PRAYER MEETING. BUT FOR THAT NIGHT, I WOULD HAVE BEEN ON M Y WAY TO PRISON.** PEOPLE WERE PRAYING TO THE LORD AND EXPRESSING THEIR LOVE FOR H I M

LOW EBB
KAREN KENNY IS FROM BELFAST BUT LIVES IN MOYCULLEN. LIKE JOE, SHE IS PROMOTING THE MESSAGE OF THE "POWER TO CHANGE" CAMPAIGN. HER FAITH RESCUED HER WHEN SHE WAS AT A LOW EBB IN HER LIFE, SHE SAYS. FROM ARDOYNE, SHE CAME FROM A REPUBLICAN BACKGROUND AND

PEACE WITH HIMSELF. " I WAS VERY ANGRY BEFORE THIS. U N D E R N E A T H ANGER, THERE I S ALWAYS HURT I

Sr Maureen, who was very encouraging. My family wasn't religious." Her mother was interned in 1971 when Karen was five-yearsold and again in 1978. It was a very difficult time for her four children. "My mum was divorced but luckily my granny lived down the road. When she was interned the second time, my brother was 18 and became my legal guardian. It wasn't an easy time. We were angry that her sympathies were taking her away from us, we want ed nothing to do with it." Karen fell in love with a Protestant man while still at school. When he asked her to get e n g a g e d , her mother reacted badly. "She told me to get out. I had to leave the house. I was 17 and in the middle of studying for my A l e v e l s . I went to work then. Stephen was a Christian since he

BELIEVE. PAIN MAKES YOU LASH OUT. B U T M Y ANGER ABATED. IT WASN'T THAT ALL M Y PROBLEMS WENT AWAY, IT WAS JUST THAT I HAD AN ANCHOR FOR M Y SOUL. I FOUND HOPE AND PURPOSE IN LIFE." H E WENT ON TO STUDY MEDICINE AT U C G A N D N O W PRACTICES AT THE

It is a non denominational advertising campaign aimed at showing people how Jesus Christ [can change their lives. Set up last year and funded by a group of business people, its message has [been delivered in the press, cine ma, billboards, and on radio and [television recently. The campaign tells you how Jesus can change your life for the better," explains Dr Joe (Fitzgibbon. "We can put a veneer |on it but Jesus can get into the root and make everything new." A free booklet and CD are avail able by contacting The Power to Change, 45 Waterloo Road, Ballsbridge, Dublin 4. Telephone 1850 536677. Its website is at www.powertochange.ie A series of Power to Change talks is taking place in Galway on Sunday nights at 7pm AT THE Clybaun Hotel. These feature per sonal testimonies of how people's lives have been changed by Jesus. They are as follows:-