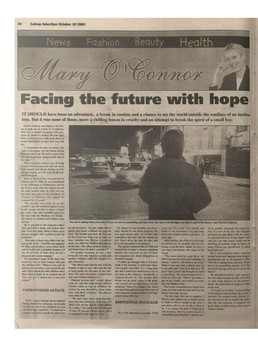 Facing the future with hope
IT SHOULD have been an adventure, a break in routine and a chance to see the world outside the confines of an institu tion. But it was none of those, more a chilling lesson in cruelty and an attempt to break the spirit of a small boy.
Patrick Flaherty was happy to be cho sen to help out on a farm in Co Galway. This was a regular occurrence far resi dents of children's homes 30 years ago. Most of the farmers who look them in treated them well, he says, but some did not. "I remember on one occasion, the 'man of the house' put my dinner on the floor for me to eat. He had a Lassie type dog and he put her sitting beside him at the table * Olher memories surface too. of being denied food because he did not work hard enough and always feeling as if he did not belong, as if he wen: on the out side looking in. Born in Roscrea to a 16-year-old Co Galway girl in I960, he was transferred to an orphanage in BaUinasloc run by the Mercy nuns when his mother moved on eight months later. In 1967. he was put into the care of the Brothers of Charity in Galway city where he remained for 10 years. "My mother was only 16 s o she couldn't sign the adoption papers. I was in the system and tins is where I stayed for years. The only available place for me was with the Brothers of Charity the homes in Sahfnll and Chfden were full up" He is grateful to the orders who gave him a home anil looked after him over the years. Most of them were decent people who worked hard, he

pain. If you are not in counselling, partake of i t You can work through your past to get to the future.' says Patrick Flaherty. He alleges he was sexually and physi cally abused by the three religious. He was aged about eight to 10 then and remembers the fear and the shame he felt. That's all in the past, he says, and he is not interested in revisiting i t The gardai contacted him in 1996 and invited him to make a formal complaint against the religious as part of their investigation into abuse allegations in children's homes. "I didn't go through with i t I'd have made a big mistake. I could have inno cent people convicted. It's a long time ago and I could have misdirected a lot of my pain at the religious. Thankfully, I copped myself on. The people w h o abused me are dead - most of the abuse was carried out by older boys, not the religious. There is a danger too when you trawl through your past that some of your memories might be false. It all hap pened a fang time ago." years on. "It is very, very unsafe and unfair to all concerned to try and fully deal with matters which took place 25 years ago." After leaving care, Patrick lived rough in Galway for six months. He was too young to get the dole. Again, he says, it was nuns and priests who came to his rescue. "The nuns used to come up to me with food parcels and small amounts of money. I used to tell them to go away. When I was very sick, a priest came up to me and said I was in a bad way. He said I had a fever and brought me back to his home. His housekeeper used to come in with soup. When I got better, I put on my clothes and walked out with out ever thanking him." Five years counselling has helped him come to terms with his past and face the future with hope, he says. "At one stage, life was so negative I felt my only option was to drink myself to death or throw myself in the river. I was alone with no-one to talk to. Now, at 41, I've chosen the path of forgiveness and healing. Having participated in counselling and reflection. I feel the pos itives greatly outweigh the negatives. For 16 years of my life, the religious provided me and others with the basics for physical survival. If they hadn't held onto me, my baby bones could now be dwelling in boreens, bogs or lakes. So many babies are abandoned. It could have been me." He is encouraging others carrying around emotional baggage from being in institutional care to set themselves free. "No-one is taking from your pain. If you are not in counselling, partake of it. You can work through your past to get to the future." He decided to tell his story and give his real name because he felt it his duty to "put some balance in the debate" about the behaviour of religious orders in the past. "I'm glad to be alive. I acknowledge if the religious had not kept me in care, I wouldn't be around today. Maybe it's my function in life to remind the public that the vast majority of religious did good. Many of them went to their graves without thanks."

on the brothers. In one unprovoked attack, they broke a billiard cue over his hack. The brother just took the boy out of the room but didn't lay a hand on "Fair play to them, they didn't turf me him. Another day daring a football game, an older boy headbutted a brother out on the street. I feel the vast majority in the face. The other children joined in o f nans and bi others w e n t about their and kicked him. He didn't retaliated f jobs m a fair and reasonable fashion. T d On T O l h r r occasion, he saw a nun say 98 p u ' i c a l of them w o e not on a being hit over the head by a child and physical and sexual rampage." another collapse under the weight of a He remembers many o f the nans w h o cared for him as kind women who pat pfc of laundry "The others nuns told the one with the the children first. "When I w a s sick in laundry to take it easy. She said she had bed on one occasion, a nun stayed b> my to keep going for the sake of the chil Side. They stayed up with children when they cried at night. If we stepped c m o f dren. The nuns often gave us their food line, we got a s m a c k bat it w a s n o t and went without themselves." Flaherty accepts that "certain things
w e n t o n " and t h a t some people suffered

terribly while in care as children. He claims he was abused by three older boys a n d three religious. His abusers
havcinaxdKd.