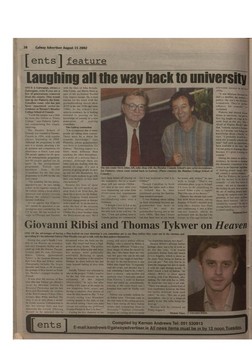 ONCE A Galwegian, always a Galwegian, even if you a r e a few of g e n e r a t i o n s r e m o v e d from the county. This would sum up Joe Flaherty, the IrishCanadian comic, who has just been a p p o i n t e d a r t i s t - i n residence at Toronto's Humber College School of Comedy. "I wish the campus was a little bit more like Oxford or Trinity College," says Flaherty lightly, not complaining but simply observing. The Humber School of Comedy was founded in Toronto, Canada in 1994, with regular classes beginning in 1999. Although the programme is still new, it is already attracting a lot of attention and competition for admittance is fierce. Last year 700 people applied for 60 spots in the undergraduate programme and 80 people applied for 20 spots in the postgraduate programme. Tuition runs anywhere from $3,250 (Canadian) for the two year programme to $3,800 for the one year course. "The academic life has always appealed to me," he says, taking a draw on his cigarette outside of the college, taking a break after a question and answer session during the school's recent summer workshop. It's no suprise that Flaherty (61) should be appointed to the prestigious post considering the CV he has. He has worked on stage in Chicago and Toronto

f aue et r [ents]n all the wy b c to u i est lu h g agi a a k nv riy
with the likes of John Belushi, John Candy, and Martin Short as part of the acclaimed Second City improv troupe. He is best known for his work with the groundbreaking sketch show SCTV in the late 1970s and early 1980s. As the school's new artist-in-residence, he is looking forward to passing on his knowledge of comedy to a new generation of aspiring comedians. The Galway connection "I'm so surprised that so many people are taking these courses. There must be a thirst for comedic knowledge," says Flaherty, whose grandmother was born in Lettermullen, Co Galway. "Teaching improv is a little more different than teaching the other disciplines. It's more of a process than a product. Although there are rules, you are dealing with the person on stage. It's just a The late comic Steve Allen, left, talks shop with the Humber Comedy School's new artist-in-residence, process of getting people to open Joe Flaherty, whose roots extend back to Galway. (Photo courtesy the Humber College School of up and not edit themselves. It's Comedy.) hard to teach students to go with have been better off staying on but I was surprised to find it in for actors, only writers!" he says their own instincts, to trust their the continent, for in a small, Clifden!" with a laugh. " T h a t ' s my own instincts.'*" Though Canadian by birth relaxation place, to go to Ireland. Despite his love of show dingy pub just outside Clifden Flaherty has taken such a shine I'd love to do something in business, he still needs to get two men at the next table over were hammering out some form to Ireland that he once Ireland. Either a play or improv. away from it all. Even then, the That'd be one of my dreams." show biz is never too far behind. of television deal, negotiations considered getting the familiar for re-run rights, and harp-stamped passport. Flaherty has already had some Once Flaherty found himself merchandising sales over a "I was thinking about taking fun with Irish drama, taking between engagements in Europe up Irish citizenship because my Eugene O'Neill's morbid play with a week off. So he decided to Guinness. " 1 thought I was in LA at the grandmother was born in Long Day's Journey Into Night make the best of the situation Ireland," he said, his and condensing it into a mini and flew to Galway, and drove to Beverly Hills Hotel instead of this little hole in the wall bar," he grandmother having left in the one-act comedy which he Clifden for a short breather from says. "I was just getting used to early 1900s. "But then I found performed with the Second City the Hollywood rat race. H e ' d Canada getting too commercial. out that there was no tax break troupe in Chicago before his television success in the late 1970s. "It was hilarious because the dad's a skinflint, the mother's a junkie, the son's an alcoholic womaniser. They're perfect subjects for comedy!" he exclaimed. Flaherty had studied serious drama in university, but got his first big laughs on stage as the male lead in the play Who's Afraid of Virginia Woolfe? After that, "comedy started to fascinate me, so I became very hungry for knowledge about comedy," he says. "I probably would have tried this [comedy school,] full time" had such an opportunity been available at the time. "But I'm not going to disparage drama because it's great training for comedy." During his tenure as artist-inresidence, he intends to maintain the dramatic component of the course as an important ingredient of making people laugh. After all, comedy is serious business. But for Flaherty the success and the money to be had in comedy - if one has talent ol course - are not as important as the feeling he gets from teaching the art of making people laugh "Seeing the studentsrealisetheir potential, to feel more confident about their humour - this is a reward for comedy." he says in closing before making his way to a school meeting.

Giovanni Ribisi and Thomas Tykwer on Heaven
ONE OF the advantages of having a film festival on your doorstep is you sometimes get to see films before they come out in the cinemas and (providing it's the informal Galway Film Fleadh) you get to talk with the film makers themselves. During this year's fleadh I was able to see Heaven, an evocative and very European thriller and to catch up with the director Thomas Tykwer and its star, Giovanni Ribisi. Tykwer, (pronounced Tykfer) is the German director of Run Lola Run and Ribisi, whose filmography includes The Virgin Suicides and Gone in 60 Seconds, but perhaps is best known as Frank Jnr, Phoebe's younger brother in Friends. devastated when she finds out the truth. Her target had been a high powered drug dealer. The police appear not to believe her and insist her actions were politically motivated. Refusing to speak Italian, her translator is the sensitive Phillipo. he alone believes her and finds himself falling in love with her. Initially Tykwer was reluctant to take on the project: "I didn't want to be the one who messes up the It was after the success of Run testimony of this legend Lola Run that Tykwer got offered a [Kieslowski]," he says, but after script by Mirimax written by reading a few pages of the script, he Krzysztof Piesiewicz and the late was imagining shots, actors, and Krzysztof Kieslowski the creators having a complete clear picture of of the Trots Couleurs Trilogy (Three what the film should be like. "1 was Colours: Blue, White, and Red). The already seeing Cate Blanchett story is set in Italy about a would- running around in this film...it was be female assassin. Unbeknownst to the easiest casting I have ever done her. her attempt fails and four except for casting my girlfriend innocents die instead. Allowing [Franka Potente in Run Lola Run]." herself to be arrested she is Casting the key character of the young and naive police officer Phillipo, who is played by Ribisi, it was slightly different: "1 had a very clear image of what he should be like, but I also knew there are very very few guys who can do this and it would be very tough tofindhim," he says. In the end however it was Ribisi who found him: "I originally read the script, and decided that it was something I had to do, I didn't have a choice - and neither did anybody else! I basically stalked Tom Tykwer, I went to Europe twice and ended up, coincidentally, staying at the same hotel and I hounded him until he finally said yes." Tykwer was actually looking for an Italian actor, "Giovanni came to me very early in the casting process, but I kept seeing all these Italian actors and comparing them to G i o v a n n i . " Tykwer eventually slopped the casting process saying "we found him already, he's here". Despite Ribisi's obvious Italian heritage, there was a bit of work to do for the role. " I ' m fourth generation Italian, born and raised in Los Angeles, which is about as far away from being an Italian as you can get." Not only had he to learn the language but also to speak it with the right Roman accent. "I didn't know a lick of Italian," he admits. Ribisi is once again working with Cate Blanchett, after making The Gift with her in 2000. He found her very easy to act with. "There was already a certain kind of trust established, however, the films are really different from each other," he says. "But she is just incredible, she is of a magical quality to me. She really brings the level up." Heaven will be released on Friday August 9. Michele Viney