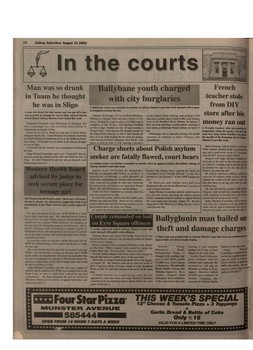 on the Dublin Road, Galway, and stealing 1 6 0 cash and a mobile phone worth 100; with stealing a car on the Headford Road, Galway, on January 2 last; and with handling a mobile phone, knowing it was stolen, at Ballybane Road, Galway on April 14 A French teacher who succumbed to last. temptation when his money ran out aid McDonagh, who is currently serving a six-month stole two items from Woodies was give* sentence in relation to other offences, was the benefit of the Probation Act at Galway remanded in District Court this week.

French teacher stole from DIY store after his money ran out

EST aa VISEA O juage Y seek secure place for teenage girl
The Western Health Board, under whose care a 14-yearsold girl is placed, was advised by a judge this week to go immediately to the High Court to seek a secure place for her. The girl was placed in the care of the WHB by a High Court order some time ago. She appeared before Galway District Court in recent weeks charged with assaulting staff members in two separate WHB-run houses for teenagers in the city and with damaging property at both houses. She is further charged with assaulting a student garda at Whitest rand Road, with attempting to get on top of a parked car on the same occasion and with being drunk and a danger to herself and others. In court this week, her solicitor, Adrian MacLynn said the WHB was endeavouring to find a place for the girl in a high security unit. The court heard that the girl had absconded from the WHB's care on fourteen occasions in the past and a WHB report which was handed into the court recommended that the girl be remanded in custody to Oberstown House for girls for a further three weeks until a secure place was found for her in a facility in Cork. Judge Michael Connellan said this case was a mailer of urgency and he called on the WHB to go straight back to the High Court so that it could find a place for the girl immediately. He then remanded the girl in custody to Oberstown House for two weeks, to appear before the court again on August 2 7 .

Julien Dorgene, with an address at 30 Long Walk, Galway, pleaded guilty to stealing duct tape and a small torch, worth 27.24 in total, from the DIY store on August 10 last Dorgene told Judge Michael Connellan he had gone to the store to buy the items so that An asylum seeker was further remanded in custody when he appeared before the holiday sittings of he could fix a leaking sink in his flat. He said Galway District Court this week. he needed the tape to fix the leak and the Andrew Jasik, 5 9 Fearann Ri, Doughiska, because the charge sheets against his client, he torch to see under the sink. Galway, is charged with failing to produce a contended, were "fatally Hawed" in that they He said he had been walking around the registration certificate, a valid passport or omitted to cite Section 2 of the 1 9 9 9 Emigration store for 10 minutes while trying to decide documents establishing his identity and nationality, Act. whether he would steal the items or not H e when requested by gardai in early July following Mr MacLynn said similar cases had been then put them in his bag and paid for some the nationwide crackdown on suspected illegal dismissed in the past but he did not have case law in barbecue fuel. aliens. His wife Elisbieta faces similar charges. He was arrested by security staff outside. court to prove his point. Jasik had been remanded in custody while his Judge Michael Connellan said he would need to Dorgene said he had been teaching French wife was granted bail in July. see case law before deciding the matter and he while studying in Ireland last year but his In court this week, gardai said that Jasik's true further remanded Jasik in custody to appear before money had run out inrecentweeks. identity was still uncertain. However, his solicitor. Judge Michael Connellan said it was not the court again next Tuesday, August 20. He then Adrian MacLynn said he had documents in his suggested to Mr MacLynn to bring the case law to very nice for a teacher lo be up before the possession to prove his client was Polish. court, but he said in mitigation the accused court the next day. had pleaded guilty and it was hisfirstoffence. He said he was looking for a dismissal of the case

COUPLE R M N E O B I Ballyglunin E A D D N AL O E R S U R OF N E N Y E Q A E FE C S
A couple appeared before Galway District Court this week charged with public order offences. Thomas Ryan and Agnes McCarthy, both c/o of the Fairgreen Hostel, Galway, were arrested by gardai on August 10 last in Eyre Square. Ryan is charged with assaulting McCarthy at the Square on that date. When charged with assault by Garda Jim Lydon, Ryan said, "I'm not guilty. That is my wife." He was further charged with being drunk and a danger to himself and others in a public place on the same date. McCarthy is charged with being drunk also in the Square on August 10. She failed to turn up in court last week to face a separate charge of being drunk at Lidl, Headford Road, on July 18, and with a breach of the peace on the same date. A bench warrant was issued for her arrest but she appeared in court this week and Judge Michael Connellan remanded both on continuing bail to appear before the court again on October 2.

man bailed on theft and damage charges
leaving a taxi without paying a 1 5 fare at Eyre Square on the same date. Garda Noel G i l l e s p i e gave evidence that he arrested and cautioned the accused at 7 . 0 5 pm on Monday evening at Eyre Square. Detective Adrian O'Neill gave evidence of further charging the accused at Galway Garda Station on the same date. Judge Michael Connellan remanded Furry on bail on condition that he sign on daily at Galway Garda Station, to await the DPP's directions. He will appear before the court " again on October 2.

A Tuam man was granted bail at Galway District Court this week on condition that be sign on daily at Galway Garda Station. Vincent Furey, Monastery Road, Ballyglunin, Tuam, is charged with stealing four sets of golf clubs, worth 3 , 0 0 0 each, from a house at Seamount, Threadneedle Road, Salthill, Galway, last Monday August 12. He is further charged with damaging three windows at the same house and with