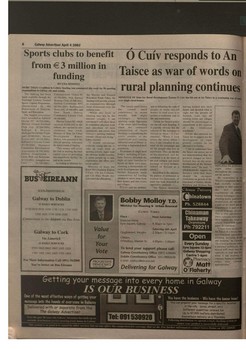 SPORTS CLUBS TO BENEFIT O Cuiv responds to An FROM 3 MILLION IN Taisce as war of words on FUNDING
BY UNA SINNOTT MORE THAN 3 million in Lottery funding was announced this week for 50 sporting organisations in Galway city and county. The funding has been made available through the National Lottery funded Sports Capital Programme, administered by the Department of Tourism, Sport, and Recreation. The largest allocations were awarded to Salthill Devon FC ( 2 5 0 , 0 0 0 ) ; Mervue United Football Club Ltd ( 2 0 0 , 0 0 0 ) ; Ballygar & Districts (Ballygar/Newbridge/Toghe rgar) (180,000); Shiven Rovers AFC ( 148,000); Ballincurry Leisure Centre ( 1 2 0 , 0 0 0 ) ; Oranmore Community Development Association ( 100,000); Galway Corporation Castle Park and Ballybane ( 100.000); Annaghdown GAA (100,000); Colemanstown United FC (100.000); NU1, Galway Rowing Club ( 100,000); Galway Corinthians RFC ( 100.000); Ballinasloe Town AFC ( 100,000); and Gort South Galway Community Leisure Club (100,000). Mervue United FC, which received 200,000 in the scheme, also opened its new clubhouse last week. Minister of State for Urban Development Robert Molloy, who presided at the official opening, welcomed the latest round of funding. "This money will assist the club in meeting the final capital costs of providing this magnificent facility," he said at the launch. According to Minister for the Marine and Natural Resources Frank Fahey, the funding will provide a boost to communities through local investment over the coming years. "While this level of funding may not be the amount sought, 1 am convinced it will allow them to commence physical work and purchase of new equipment, and ensure that Galway's sporting tradition remains vibrant and strong," Fahey claimed. "I would encourage everyone, young and old, to take up some kind of sporting activity. Apart from the obvious health benefits, it opens people up to new experiences and offers new social outlets." Minister of State for Rural Development Eamon O Cui'v, CUr Joe Callanan, and Cllr Mary Hoade also welcomed the allocations.

rural planning continues
MINISTER OF State for Rural Development Eamon 0 Cuiv has hit out at An Taisce in a continuing war of words over single rural houses. The single rural house has caused much controversy in recent months, with angry exchanges between opposing camps. Opponents of the single rural dwelling claim the continued construction of single dwellings is jeopardising the scenic amenity of the countryside and causing infrastructural problems in servicing a fragmented rural population. Proponents of single rural homes, including O Cuiv, have fiercely defended the right of rural families to build on their own land, claiming a moratorium on such developments would further fragment rural communities by" forcing children to move away from their homes and into towns and villages. O Cui'v said his primary aim in defending the right of people to build one-off houses in rural areas is to protect a traditional way of life and community. "Given An Taisce's policy on one-off rural housing, it is patently obvious that the concept of the (ownland is foreign to them," O Cui'v claimed. "When I look across the valley where I live, 1 can visualise in my mind all the townlands and all the people who live in each house. They are the life of the townland, and the townland is at the heart of the rich cultural and social heritage of rural Ireland, indeed of Ireland as a whole." According to the minister, the pattern of settlement in Ireland for thousands of years has been dispersed as opposed to clustered. "An Taisce however, having looked into their hearts and decided what is right for the people of Ireland, state that all existing towns and villages should be encouraged to consolidate at the expense of the traditional townlands." O Cui'v also criticised An Taisce for its support for the development of eight growth centres as an alternative to Dublin. "I fail to understand how An Taisce can accuse me of not understanding that the greatest danger to rural Ireland lies in the over development of the Greater Dublin area," he said. "I wholeheartedly support An Taisce's view that there should be stringent restrictions on growth of the hinterland of Dublin, Meath, Wicklow and Kildarc, but

IREANN
www.buseireann.ie GALWAY TO D U B L I N
13 DAILY SERVICES

GALWAY TO CORK
Via Limerick

f PROGRESSIVE I DEMOCRATS I