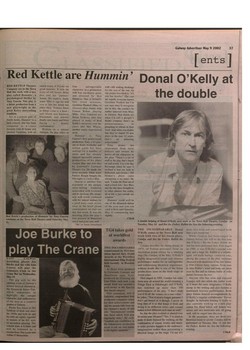 [ENTS 1 Red Kettle are
RED K E T T L E T h e a t r e Company are in the Town Hall this week with a new play called Hummin', a psychological thriller by Tony Guerin. This play is a debut production from a new p l a y w r i g h t in t h e great K e r r y storytelling tradition. Set in a remote part of North Kerry, Hummin' is a dark comedy that has been compared to a cross between John B Keane and Quentin Tarantino, with an added touch of Psycho for good measure. It tells the story of old farmer Mike Dee and his ' p a r t n e r ' Jennie. His nephew, Andy, wants Mike to sign his land over to him but Jennie has other ideas. Violence flares as things come to a head spilt blood, new hatchets, blackmail, and murder finally sees Jennie and Mike facing a deadly confrontation! Written in a unique dialogue, the play offers us

Hummin
with calls making bookings for the rest of the run. As one punter described it, 'it's raw but terrific!' The cast are superb, everyone knows Geraldine Plunkett but I'm not sure they'll recognise her in this; she couldn't be further removed from Mary in Glenroe. Red Kettle are what I'd call a people's theatre company; there's no pretentiousness, or preaching or elitism in tbeir work. And when you realise that they've staged 19 new plays in the past 10 years, that's an amazing achievement." Tony draws his inspiration from local sources and swears he knows all the characters in the play. "There's a lot of stuff in the play that's based on real events. I'm a bit like Kavanagh where he says T inclined to lose my faith in Ballyrush and Gortin / Till Homer's ghost came whispering to my mind / He said; 'I made the Iliad out of such a local row.' Star Wars and the like have brought us to other planets but really, all of life is just outside our window." Hummin' could well be one of the theatrical debuts of the year and you can catch it from until Saturday, May 11 commencing 8pm nightly. CMcB

four unforgettable characters in a production with four top-drawer actors and directed by Ben Hennessy. One of Ireland's best loved actresses, Geraldine Plunkett (Mary in Glenroe) plays Jennie with Eamon Rohan playing Mike. Also featured are Brian Doherty who has played in many of Red Kettle's successes over the years and Mai Whyte, another vastly experienced actor. Hummin' is Tony Guerin's first professional production. Tony, a 63-yearold ex-Kerry footballer and retired garda has been writing for a number of years and has already enjoyed successful amateur productions of his plays Cuckoo Blue and Solo Run by Listowel's Lartigue Theatre Co. He made the news recently when actor Patrick Bergin bought the film rights to Cuckoo Blue. Guerin is another fine exponent of the unique story-telling tradition associated with Listowel and its environs. His unique way with words combined with his natural instinct for a good story came across even in the brief phone conversation we had one day last week. It was the morning after the play's first preview in Waterford which had gone very well. "We've been inundated

DONAL O'KELLY A T THE DOUBLE

Red Kettle's production of Hummin' by Tony Guerin continues at the Town Hall Theatre until Saturday May 11.

A double helping of Donal O'Kelly next week at the Town Hall Theatre. Catalpa on Tuesday, May 14 and Bat the Father, Rabbit the Son the following evening. THE INCIOMfPARABLE Donal O'Kelly comes to the Town Hall next at w o r l d f e s t w e e k with t w o o f his f i n e s t p l a y s , Catalpa and Bat the Father, Rabbit the awards Son. Catalpa describes the daring rescue, in T W O DOCUMENTARIES 1875, of F e n i a n p r i s o n e r s from an commissioned by TG4 have Australian penal colony by a whaling taken Special J u r y (Gold) ship 'The Catalpa, of the title). O'Kelly's A w a r d s at t h e Worldfest International Film Festival highly imaginative script and virtuoso held recently in Houston, performance makes for an unforgettable and exhilarating theatrical experience; USA. Ar Dover Fein, produced without doubt this is one of the finest by Crescendo Concepts and productions seen on the Irish stage in Shackleton agus Scott, recent years. First staged in 1995. Catalpa has since produced by Crossing the Line Films, each took a top been seen all around the world (winning a award. Each was awarded a Fringe First at Edinburgh) and O'Kelly gold medal in the Special has notched u p more than 300 Jury Award category. performances of the play. "I don't think TG4 ceannasaf. P6T 0 you'd fit all the venues on a tour t shirt.' Gallchdir. congratulated both he jokes, "You'd need a longer garment! 1 production companies teams don't get bored of it though. I never d o for their achievements and long runs of it so that keeps it fresh and said the awards fully bore out doing it in different cities and venues makes it feel different each time as well." eile. "Intern So, has the play evolved or altered over like these which TG4 now its seven year lifespan? "Yes. I've tried to make it mote focused by working on the combination of sound, word.s and music to make pictures happen in the audience's imagination rather than presenting a physical image on the stage. I'd say it's

EAST GALWAY" accordion player J o e Burke a n d his wife Ann C o n r o y will play t h e L i s t e n e r s C l u b in t h e Crane Bar on Wednesday, May 15. The gig will be the opening event of Galway's newest festival Dominica, the Domincik Street Fiat, which endeavours to highlight the unique character and authenticity of the area as a creative quarter of Galway. Burke has been at the forefront of Irish trad since the 1950s and both he and his wife are rightly regarded as masters of the B/C style of accordion playing. The concert stars at 8.30pm and will be followed by a session from Tim Lyons and Ailbbe 0 Monachain.

JOE BURKE TO PLAY THE CRANE

more of a word and sound-based work than a text-based one." While Catalpa has been staged in Galway before, this will be the first time that O'Kelly's Bat the Father. Rabbit the Son has been performed here. First staged in 1988, it was O'Kelly's second solo play and a huge hit. Rabbit is a middleaged, self-made haulage contractor who, during the course of the play, becomes obsessed with memories of his late father, a 1916 Citizen Army veteran. From time to time Rabbit's mind and body are taken over by Bat and an intense battle of wills ensues between the two. Anyone w h o h a s seen and enjoyed Catalpa will also relish this earlier work as it hears the same imaginative O'Kelly stamp in the writing and also features a trademark bravura performance. Both plays feature musical accompaniment by O ' K e l l y ' s regular collaborator Trevor Knight. In between touring O'Kelly is also currently working on a s e w play called The Hand which will feature two actors and two musicians and. all going well, will be staged later this year. In the meantime, there are these two theatrical feasts to savour. Catalpa will be performed on Tuesday. May 14 and Bat the Father. Rabbit the Son the following evening.