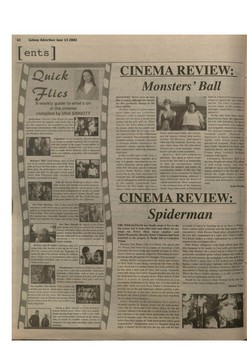 [ents 1
Quick
A weekly guide to what's on at the cn m ie a compiled by UNA SN O T INT
Spiderman: Director Sam Raimi deviates somewhat from the original comic book strip in this film adaptation, but nonetheless provides ^ high-octane entertainment with a healthy dose of humour. Spiderman is showing in four screens at the Omniplex this weekend. Unfaithful: Fatal Attraction director Adrian Lyne brings us another moralistic tale of infidelity with this remake of the classic French thriller La Femme Infidele. Richard Gere and Diane Lane play a couple whose domestic idyll is shattered when Lane embarks on an affair with catastrophic consequences. Monsters' Ball: Hard-hitting story of love and racial tension which provided Halle Berry with an Oscar for best actress earlier this year. Berry gives the performance of her career as a woman who falls for the racist prison guard (Billy Bob Thornton) who executed her husband. A powerful love story. John Q: Denzel Washington plays a bluecollar worker who hijacks a hospital emergency j room demanding that his son be given a life- ' i saving heart transplant even though his health insurance won't cover it. Robert Duvali, Anne Heche, James Woods, and Ray I IOII.I also star in this poor relative of Dog Day Afternoon. jI The Time Machine: This is the second film adaptation of HG Wells' classic, and has the added appeal of being directed by his great grandson, i Simon Wells. This version departs somewhat from the original plot. Samantha Mumba. in her film , stars opposite Guy Pearce and Jeremy Irons. Star Wars Episode II: Attack of the Clones picks up the story 10 years on from The Phantom Menace with more forays into the world of alien politics. Anakin Sky walker and Obi Wan Kenobi become embroiled in an intergalactic war while attempting to foil an assassination attempt on Padme Amidala. 40 Days and 40 Nights: Ludicrous story of a young man who decides to give up sex for Lent after his relationship breaks up. Typically, he meets the girl of his dreams during his celibacy drive. Expect lots of masturbation jokes and a disturbingly simplistic take on the so-called 'battle of the sexes'. Ihunderpants: Lowbrow fartfest in which a young boy with uncontrollable flatulence befriends a child genius with no sense of smell. The quirky and sentimental plot will please parents, while constant wind jokes will have children rolling in the aisles. Not Another Teen Movie: Well actually this another teen movie, which draws much of its 'content from spoof scenes from other teen movies in the last few years. The characters are deliberately cast as blatant stereotypes.Watch out for cameos from 80s icons such as Mr T and MolK Ringwald.
** ---- --

CINEMA REVIEW:
Monsters'
MONSTERS' BALL isn't an easy film to watch, although the reasons for this gradually change as the story unfolds. The films begins as a prison drama about father and son 'correction officers', with a parallel drama playing out between a death row inmate and his wife and son. Soon, however, the action shifts to outside the prison, where the two guards and the bereaved alike try to cope with the repercussions of the condemned man's execution. The persistently bleak Southern setting, eventually identified as Georgia, further emphasises the characters' misery, making Monsters' Ball a particularly harrowing cinematic experience. In the second half of the film, a series of unrelenting tragedies give way to a greater concentration on two central characters; prison guard Hank (Billy Bob Thornton) and the widowed Leticia (Halle Berry). Until now everyone in the film was cruel to everyone else, all scrabbling around in a pit of unhappiness with the exception of the saintly condemned man. However, the film finally slips into a slower, subtler, gear which allows us to

Ball
films as a bastion for conservatism, religious fanaticism, and strident racism. The film's treatment of racism verges on the simplistic, although a small effort is made to address it. On the other hand. Berry clearly deserved her Oscar. She approaches her role with dedication, her lovely features unadorned with makeup and frequently distorted by crying, her diction rounded out with a Southern accent. Thornton is impressive as always, investing his rigidly stern prison guard with unexpected sympathy. Heath Ledger plays Hank's disturbed son Sonny with surprising gravity, and Sean 'P Diddy', Combs plays Leticia's husband Laurence with dignity. Ultimately, Monsters' Ball is a moving thought-provoking film which is well worth seeing. Any overt attempts to tug at your heartstrings are mainly restricted to the first half, after which the slight shades of crude characterisation give way to a quietly affecting and memorable character study. Katie Moylan

better understand Hank and Leticia. and the reasons behind their earlier actions. Yet Monsters' Ball doesn't offer any easy solutions. Even the very end, which alone lifts this film above Hollywood's usual mundane output, doesn't provide a clear resolution. Monsters' Ball isn't without its problems. The speed at which events occur in the first half is as implausible as they are incongruous, which bewilders the audience and wastes the considerable talents of the cast. The depiction of an execution by electric chair is stomach-turning, although it does effectively show the horror of capital punishment. More complicated is the portrayal here of the American South, long represented in Hollywood

About a Boy: Based on Nick Hornby's popular British novel. About A Boy is a comedydrama starring Hugh Grant as Will, arich,child- ,ij free and irresponsible Londoner in his thirties w ho. in search of available women, invents an imaginary son and starts attending single parent meetings. H

THE VVEB-SLINGER has finally made it live to the big screen, but it took some time and effort. At one stage no fewer than three s t u d i o s and Titanic/Terminator director James Cameron had been attached to the project. It finally fell to Columbia Tristar. Director Sam Raimi (The Evil Dead, The Quick and the Dead) had been to a couple of meetings with Columbia but never really saw himself as being in with a chance however much he wanted it. Next thing he knew he had got the job and his first thought: "I'm screwed." Getting Spidey swinging down the streets and avenues of New York is one thing, satisfying the fans of the comic-book hero is another. Raimi has really pulled it off, he has spun a deft web of story and action. Naturally some little things have been changed but they are only for the dedicated fans to nit-pick about. What matters is that there is a sense of s p e e d and e x h i l a r a t i o n as you accompany Spiderman as he skims low over the roofs of taxi cabs. And you feel Peter Parker's frustration at missing out on the girl (although without spoiling a plot point he does get lo kiss her). However the person who designed the Green Goblin costume has been watching far too much Power Rangers. Tobey Maguire as the e p o n y m o u s hero m a k e s a strangely perfect fit. Known mostly for his indie-picture roles, like ke Storm and Cider House Rules, he fills the costume without it looking like so much lycra. If there is any criticism to be made about Spiderman. it's the high level of teenage angst that pervades the movie and the holier than thou mantra of "with great power comes great responsibility". Nonetheless since it's Maguire doing the angst. it doesn't go too far over the top and with his face

you kind of expect it. Sparring nicely up there is Willem Defoe and he deftly contends with the dual nature of his character(s), while Kirsten Dunst plays delightfully off the fact she's enamoured of a super hero. Sam's brother Ted Raimi makes a cameo appearance as a harassed minion in the newspaper office. Peter Parker (Maguire) is the high-school geek who also happens to be madly in love with girl-next-door Mary Jane (Dunst). On a school trip he is bitten by a new genetically modified spider, which imbues him with all sorts of cool powers, the swinging is only the half of it When Peter's uncle Ben (Cliff Robertson) is killed Spidey comes out to play vigilante with the bad guys. M e a n w h i l e scientist N o r m a n Osborne (Defoe) is determined to finish his military experiments on himself. When the Green Goblin emerges, it is only a matter of time before Spiderman and he clash. Watch for the moment when Norman looks into the mirror and the Green Goblin talks back. Michele Vinev