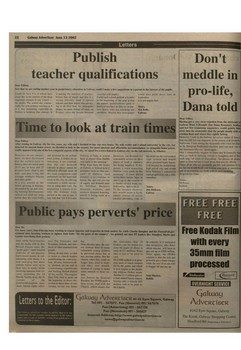 Publish teacher qualifications
Dear Editor, Now that we are ending another year in postprimary education in Galway, could I make a few suggestions as a parent in the interest of the pupils. Could we have 9 to 4 school days every day in the interest of the most important element in any school -- the pupils. The school day contrac tually for post-primary teachers is 9 to 4. Any shortening, especially on Fridays is breaking that contract. It is putting the interests of teachers before that of pupils and this is a wrong priority. And it upsets schools and their pupils who are try ing to do their best. So, principals, please, no more letting off early on Fridays (also the streets become crowded with pupils). Could each school publish a booklet at the beginning of the year giving the names, qualifications (pass or hons) of teachers so that we as par ents know who are teaching our children. Maybe this newspaper could also print these lists in September. Lets put pupils first. Yours, MA Kelly, Galway.

to look at train
Galway at 9am, it would have to depart from Dublin very early in the morning". What hope does the future of Galway or Ireland hold if attitudes such as this pre vail? If Galway (and Ireland) is to continue to boom, the age-old precept of supply and demand must be fulfilled. Business demands workers, and workers demand housing, which is being built at a ferocious rate. However, the demand for reasonable access to their places of work is currently not being supplied. If this means a train departing Dublin "very early in the morning" (I trust trains arrive there before 9am) or dare I say it, the creation of a shuttle service from, say, Ballinasloe, then so be it. To the inexpert observer, this would seem a fairly simple course of action towards alleviating some of the strain on the overworked road system and would allow potential home buyers look beyond the restrictively high priced city, and would help Galway's expansion (and progression) run a little smoother.

Dear Editor, After renting in Galway city for two years, my wife and I decided to buy our own house, My wife works and I attend university in the city, but deterred by current house prices, we decided to look to the country for more spacious and affordable accommodation. As alongside house prices, traffic appears to be one of the less congenial aspects of the city, we opted fro a town linked to Galway city via the rail network, ie, Athenry. However, to our amaze and accessed by an archaic ment, we have discovered road system, it strikes me as that the earliest train to ridiculous, if not criminal, Galway does not arrive until that the rail network 10.IS am, an hour and IS (already in place) cannot be minutes later, than I, my utilised to alleviate some of wife, and dare I say, the the road congestion (and average workers begins pollution) on the approach their daily grind. roads to the city, by offering In a city quoted as the commuters a viable alterna fastest growing in Europe, tive to using their cars. On surrounded by up and com requesting a reason as to ing housing developments why the Galway train (which are sold out long arrived in the city so late, I before they are even built) was told that "for it to reach

Dear Editor, Having got a very clear rejection from the electorate of Galway West, I thought that Dana Rosemary Scallon and her few remaining supporters would quietly fade away into the anonymity that the people clearly wish to consign them and where they rightly belong. However, I note in the Galway Advertiser letters of June 6, that she still has one supporter in the person of B Donnelly, Ballybane. I was among the thousands who voted for Dana in the European Parliament elections and I am now one of the thousands who say "never again." May I respectfully suggest to Dana and B Donnelly that they go back to carrying statues to Loughrea and if they wish sing "all kinds of everything", but please, oh please, spare us from having to read about their pro-life efforts. Those of us who are genuinely pro-life will continue to be so, but we would thank you to keep your pens to yourselves and let us continue our work without your meddling. So good-bye Dana. Yours, M Power, Salthill

Public pays perverts' price
Dear Sir, For many years, Sinn Fein has been working to expose injustice and hypocrisy in Irish society. So, while Charlie Haughey and his FiannaFail gov ernment were berating workers to tighten their belts "for the good of the country", we pointed out that FF leaders like Haughey, Burke and Law lor were lining their pockets. And, while Governments and the media told us that British Forces were the "good guys" (and wasted millions of tax-payers, hard-earned money in col laborating with them), it is now emerging that these sinister forces were up to their eyes in murky deeds involving innocent Irish cit izens including the 14 Bloody Sunday dead, the 33 victims of the Dublin/Monaghan mas sacre, human rights solici tors Pat Finucane and Rosemary Nelson, and hun dreds of other unarmed Irish people. During all that time, we had to listen to church leaders pontificating on contracep tion, divorce, homosexuali ty, abortion, etc (as well as condemning republicans and backing British Forces in the north). Onceagain. Sinn Fein tried to point out the hypocrisy of those cleric.lmi in those days of cen sorship, no-one was listen ing. Now, decades later, the seri ous damage done to many vulnerable young children by perverted clerics has, at last, become public. But the church, when they could no longer hide, tried to main tain their vast wealth, instead of trying to make some amends to their vic tims. Just before the General Election, the FF/PD made a then secret, deal with the Church, which means that the maximum that 18 Orders can be liable for over 40 years of abuse is only E127 million. Even that is not to be paid in cash. Over E80 million is in prop erty, most of which waspaid for by the public and which is now surplus to the declin ing religious Orders' needs. Another El3 million goes to a trust underChurch control, leaving only a miserly E2S million cash to be paid by the Church. In contrast, it is estimated that tax-payers, who didn't abuse anyone, will have to pay out up to E500 million. Once again, the FF/PD solution is that the rich and powerful get a blank cheque while the rest of us are told to bugger off and pay up.