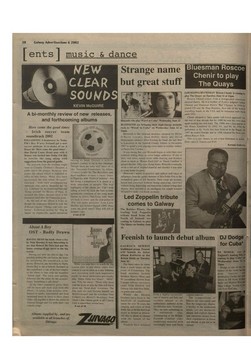 [entsl music & dance CtfAR "SOUrV&S
KEVIN A b i - m o n t h l y a n d r e v i e w McGUIRE r e l e a s e s ,
Blotooth who play Wired at Cuba* Wednesday June 12 BLOTOOTH are bringing their high-energy acoustic rock to ' W i r e d ' in Cuba* on Wednesday June 12 at 11pm. Blotooth is the unusual moniker adopted by Myles O'Reilly (vocals). Dara Diffily (bass) and David Shakespeare (drums). After forming the band, the lads flew to Lanzarote in the Spanish Canary Islands in December 1997 to spend a year playing cover tunes to holiday makers in Puerto Del Carmen. It was during that year Blotooth began to write their own material, testing them on cover-happy audiences. If one of their own tunes would incite table dancing and drunken cheer as much as 'Brown Eyed Girl' or 'Sweet Caroline' it passed the test. Only once flying home, Blotooth eventually wrote a full set of original material and decided it was time to come home for good. Blotooth's music is positive and upbeat and takes in influences from the quirky humour of Ben Folds Five to the melancholy grace of Jeff Buckley. Their songs are acoustic based and extrovert without being annoying, introvert without being depressing and humorous without losing their dignity, their material is an intelligent but simple formula designed to make you drunk on music.

Bluesman Roscoe Chenir to play The Quays
LOUSIANNA BLUESMAN Roscoe Chenir is coming to play The Quays on Tuesday, June 11 at 11pm. Roscoe Chenir comes from a distiguished American musical family. He is a brother of Zydeco ledgend Clifton Chenier and bluesman Morris 'Big' Chenier. In 1958 he joined CD and the Blue Runners, then one of the hottest travelling bands in the USA and he remained with them until 1970. Chenir adopted a 'have guitar will travel approach' for the rest of that decade but by 1980 he was his own man again leading his own band. The 1990s saw a him appear at the Blues Estafette in 1992, 9 3 , and 96. In 1994 he performed at the North Sea Jazz Festival in the Hague. In 1997 he toured Europe and in 1998 released his third solo album Roscoe Style. This is a rare chance to see a real bluesman in action. Don't miss it. Tickets cost 10. Kernan Andrews

Here come the good times Irish soccer team soundtrack 2002
FOLLOWING A brainwave by Today F M ' s Ray D'arcy Ireland got a new soccer a n t h e m . A r e - m a k e of an A House hit 'Here come the good times' thus David Couse (front man with A House) was invited into Today FTVI HQ to r e w r i t e t h e song along with suggestions from the general public. The proceeds from the resultant single went to Crumlin Children's Hospital, a noble end to the project. However, now comes the album which is expected to whip us into frenzy. Many may have questioned the title when 'Roygate' emerged - with such accompanying optimistic titles such as 'Beautiful day' by U2, 'Celebrate' by An Emotional Fish and 'Jump around' by House of Pain. It seemed the titles chosen were a bit premature until after the Cameroon game. By the end of the album it looks as though the realisation kicked in with the DrReam classic 'Things can only get better'. Followed swiftly by 'Big in Japan' by Alphaville, again optimism

raising its head. Overall it reflects Ireland's journey so far in this campaign. Though there are some naff tunes on it, like 'Sayonara Connemara' by Allies, 'Country roads' by The Revellers and, those murderers of many a classic. Dance to Tipperary with 'Fields of Athenry* - but this being a compilation it is aimed at a wide spectrum of people. The real highlights of the album are 'Can't help falling in love' by Lick the Tins (a truly spectacular rendition of the song made famous by Elvis), Thin Lizzy with 'Boys are back in town' and the tear-jerker of 'Put 'em under pressure' from Larry Mullen and Ireland Squad 1990. Here come the good times? Time will tell in Ireland's case. 6 out of 10

About A Boy
O S T - Badly Drawn
HAVING READ the book About a boy by Nick Hornby, it was interesting to see that Robert De Niro had put the funny coming-of-age novel to the big screen. Having not seen the film to date I'm possibly putting the cart before the horse by reviewing the soundtrack to the movie. However, any recording by Badly Drawn Boy is one to behold. Included on this soundtrack is one of the best singles in the charts to date with the beautiful 'Silent sigh'. The track was quickly followed into the charts by the acousticbased 'Something to talk about'. As the film's popularity grows there will be more and more seen from this album - it varies from acoustic slowburners to quirky instrumental and from orchestral tours de force to three chord tricks. All together it shows the merits of Damon Gough and Co with their vast

Feenish to launch debut album DJ Dodge
G A L W AY'S N E W E S T traditional group, Feenish will l a u n c h its d e b u t a l b u m Rabharta a t the Roisin Dubh on Tuesday June 11. The band takes its name from a small island off the coast of Connemara. The band members include brothers Marcus (flute) and PJ (accordion) Hemon from Carana whose ancestors came from Feenish and Galway city man Don Stiffe, on guitar and vocals. Whilst the Hernon brothers have been at the forefront of traditional music for over 20 years, the singing and voice of Don Stiffe has to be the best kept secret in Ireland at present. All this is about to change with the launch of the album. Feenish have returned

for Cuba*
DJ D O D G E , one of England's leading DJs, is coming to play Cuba* on W e d n e s d a y J u n e 12 at 11pm. Dodge is one of the big names on the scene having done remixes and production Credits for such artists as Jill Scott, Erykah Badu and Method Man and Mary J Blige. Tickets 7on sale from BarCuba. from a highly successful tour of Austria and Italy and recently played to an enthusiastic audience at the Inishbofin Arts Festival. They are now embarking on a nationwide tour, commencing at the R6isin. Feenish combine older traditional material with excitingly new and fresh original material. The compositions of Marcus the tune-smith and Don the songwriter, display a loyalty to the traditional mode, yet are distinctly unique and explore themes and emotions drawn from their experiences at home and abroad. A gig not to be missed.

While you may have to watch the big screen epic to put these tunes into context it can he taken as a easy listening new recording with such impressive tracks as those mentioned previously, plus 'Delta (little boy blues)'. 'SPAT' and 'File me away'. Those who have read the book or seen the film will know about the 'Dead duck* overtones. The film stars our own Victoria Smurfit (ex Ballykissanget) and the excellent Tony Collette (ex Muriel's Wedding). Now where's that cinema guide at all? I know I left it somewhere around here. 8 out of 10

Albums supplied by, and are available at all branches Zhivago of,