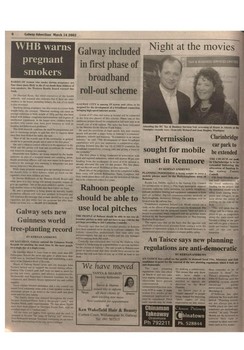 BABIES O F women who smoke during pregnancy are four times more likely to die of cot death than children of non-smokers, the Western Health Board warned this week. Dr Sheelah Ryan, the chief executive of the health authority, said research also indicates that if there are other smokers in the house, including fathers, the risk of cot death is also increased. Smoking during pregnancy can also result in a lower birth weight baby, she stressed. "Maternal smoking can cause an average reduction in birth weight of 200g and has also been linked with asthma, congenital malformations and degrees of intellectual impairment. In the longer term, children born to mothers who smoke may have poor memory as well as learning and behavioural problems." This Irish research confirms the need for programmes not just to encourage people to quit but also to support them once they have kicked the habit, she said. "Best of all, the overall aim of the community in general should be to persuade people not to start in the first place." She said a tobacco control officer is to be appointed in the WHB and this person will lead and co-ordinate the board's risk reduction strategy for smoking. Meanwhile new mothers are being targeted by the health authority as part of a hospital based anti-smoking drive. Health promotion officers will visit new mums in hospital to reinforce the message that smoking is dangerous not just during pregnancy but afterwards. While many pregnant women give up smoking because of the health risks to their babies, some go back on the cigarettes when their children are bom. Dr Declan McKeown of the Western Health Board said while there is a very strong will among pregnant women to give up cigarettes - one of the most addictive agents - a very high number return to the habit after their babies are bom. He said a programme is being drawn up whereby health promotion officers will visit new mothers in hospital and will reinforce the message that women should try to stay off cigarettes, not just while they are pregnant but after their babies are born, too. -- MARY O'CONNOR

GALWAY CITY is among 19 towns and cities to be targeted for the development of a broadband connection bringing high-speed internet access. A total of 67 cities and towns in Ireland will be connected in the first two phases of this scheme. Phase one of this ambitious project should be completed in full next year at an overall cost of 6 0 million. The news has been welcomed by the Minister for the Marine Frank Fahey. He said the provision of high-speed, low cost internet access will provide a major boost to Galway's e-commerce industries, schools and business. "E-commerce is an intense industry," he said. "The development of these broadband capabilities will give our industries a competitive edge, pushing Ireland into the top 10 of OECD countries for broadband connectivity, creating jobs and giving a boost to our economy." The first phase is being conducted in association with local and regional authorities, which will receive 90 per cent funding from the exchequer. A total of 4 4 million is already allocated this year for this project. The first phase will see the roll-out of 50,000km of fibre networks. Phase two of the programme, due to be completed within three years, will include Ballinasloe, Tuam, Loughrea, and Gort, while phase three will also see the inclusion of Athenry due to be completed within five years.

Attending the HC Tax & Business Services Ltd. screening of Hearts in Atlantis at the Omniplex recently were (from left) Richard and Jean Hughes, Woodquay

mast in Renmore
BY KERNAN ANDREWS PLANNING PERMISSION is being sought to erect a mobile p h o n e mast in the B a l l y l o u g h a n e area of Renmore. Kiopla Ltd, Dublin, applied to the Galway City Council for permission to erect a 25m high monopole support structure carrying radio antennae for mobile telephony, palisade perimeter fencing and equipment containers to form part of c e l l u l a r digital c o m m u n i c a t i o n s network at Ballyloughane, Renmore, Galway. The antennae will be located near the railway line. Compliance engineers Ireland Ltd, Meath carried out a study on the effects of the proposed mast for Kiopla Ltd. The study concluded that the proposed system "does not pose a hazard to personnel when compared with the guideline limits defined by the International Commission on Non-Ionising Radiation Protection". The report says that on the basis that the operator will preclude unauthorised persons from contact with the elements of transmitter system it is not deemed necessary to recommend protective measures to ensure public safety.

BY KERNAN ANDREWS ON SATURDAY, Galway entered the Guinness World Records for planting the most trees by the most people on a single day at a single event, On Saturday March 9. from 1 lam to 4pm, more than 400 Galwegians braved the snow and gales to plant more than 6,000 trees in Terryland Forest Park and establishing a new entry in the Guinness Book of Records. Mayor of Galway Donal Lyons and city manager John Tierney turned out to support the record setting effort. Galway City Council park staff were on hand to assist by giving out trees, spades, and advice. Leisureworld, McDonalds and Supermac's donated vouchers for the volunteers and Dunnes Stores sponsored tea and coffee supplies. Local schools boosted attendance and a city council van toured local residential areas with a loud speaker system to encourage people to go down to the forest park and plant some trees for their family. "The family theme was stressed throughout the event because Terryland Forest Park is the people's park," said Stephen Walsh, parks superintendent. '"To date about 70,000 trees have been planted in Terryland Forest Park, with an eventual target of 1.7 million trees." All the trees are native Irish species and the park is intended to become "the lungs of Galway city" stretching from Botharmor through Terryland, continuing on out below Riverside and reaching all the way up to Castlegar.

Connolly says that two all-weather pitches in Rahoon ^ ' d d be run by a private company. The Labour councillor understands that that only one person/company has put in a tender and the city manager will be meeting them this week. Connolly has criticised this saying the Galway City Council is "abdicating its responsibilities to provide facilities for the citizens of Galway". She said people in Rahoon were given to understand that they would have access to the pitches but will now have to pay up to 6 0 an hour to use them.
a v e 3 e e n t e r , e r e o u t 1 0

THE CHURCH car paalt in Ciarinbridge is to be extended following the allocation of funding by the Galway County Council. Cllr Noel Grealish, who had made representations toi the local authority for,, funding for the project, said the extension would help to allay fears among Massgoers and villagers in the area about the safety of parking on the side of the N18. "This will mean that the village will be a much safer place to go, as congestion along the main street will become a thing of the past and will not pose a threat to locals and tourists," Grealish said of the car park extension.

An Taisce says new planning regulations are anti-democratic
BY KERNAN ANDREWS AN TAISCE has called on the public to demand local TDs, Ministers and Dail candidates to press for the removal of the new planning regulations which it feels are anti-democratic. The new planning regulations came into effect on March 11 and new rules over making submissions or objections have proved controversial. A submission/objection now costs 2 0 to make. If made within five weeks of the submitted application it must be considered. Third party appeals may be made by making a submission. This means that only those who have made a submission on the file are entitled t o appeal the decision t o An Bord Pleanala. An Taisce says it is "totally opposed" to people being charged for exercising "their rights of free expression on any matter hwese they consider to be of concern to them". An Taisce's planning officer John O'Sullivan said the planning system should encourage public participation, rather than discourage it. O'Sullivan has also criticised the five week time period. "Planning notices are not always put in a visible place on sites and sometimes are misleadingly worded," he said. "People should not be restricted to exercise their right to comment by short strict time limits such as five weeks."

all their clients of their exciting new move