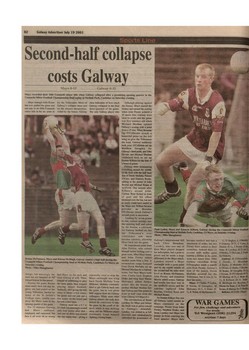 Second-half collapse costs Galway
M a y o 0-15 Galway 0-11
Mayo recorded their 34th Connacht minor tide when Galway collapsed after a promising opening quarter in the Connacht Minor Football Championship final replay at McHale Park, Castlebar on Saturday evening. Mayo manager John Keane has now guided the green and red side to its fifth Connacht minor title in his six years in for the Tribesmen. Most of Galway's collapse must rest on the players themselves. Aided by the breeze, Galway clear indication of how much Galway collapsed in the final three-quarters of the game. The only Galway player who Although playing against the breeze. Mayo started the brisker and opened the scoring when John Prenty pointed a 35 metre free. Galway were slow to settle and the game was five minutes old when Michael Meehan opened Galway's scoring with a point from a 25 free. When Brendan Og O'Collerain struck a beautiful point on the left wing to give the Tribesmen the lead, Galway suddenly took over. O'Collerain set up Matthew Geraghty for Galway's third point, and John Devane and Michael Meehan combined well to set up Emmet Killeen for the first of a brace of points. Galway were dominating everything around the middle of the field with the half back line of Derek Mullahy, Eamon O'Cuiv, and Damien Burke, adding to the power of John Boylan and Michael Keane at midfield. One minute after Killeen's second point, Cormac Bane kicked in front of goal and his effort skimmed over the bar, but just as easily could have ended in the Mayo net. Killeen became provider as Brendan O'Collerain struck Galway's seventh point in succession. Leading by seven points to one, sixteen minutes into the opening half and aided by the breeze, a Cakewalk for Galway looked on, but the T r i b e s m e n ' s over confidence saw them become careless, allowing Mayo back into the game. An inspirational point from Alan Durkin, who soloed through before kicking over a great score, lifted Mayo hearts and John Prenty added another point from a free. A tremendous surge forward from Derek Mullahy set up Michael Meehan for a Galway score, but then Mayo took over. Centre back Stephen Drake and wing back Martin Mulvaney added further points into the breeze as another Michael Meehan free had Galway just four points in front at half time with the score Galway 0-9 Mayo 0-5. The introduction of Brian Lynskcy for Mayo just before the break was to prove crucial to Galway's downfall. Lynskey was slotted in at full forward and immediately cancelled the dominance of

Paul l.ydon, Mayo and Emmett Killeen, Galway during the Connacht Minor Football Oiarapionship final at McHale Park, Castlebar, Co Mayo, on Saturday evening. Photo: Mike Shaughnessy Galway's inspirational full back Clive Monahan. Lynskey, who was one of three Mayo players dropped for indiscipline, had a point to prove and he made a huge difference to the Mayo attack. Lynskey started a Mayo onslaught with a great point and by the eighth minute of the second half the sides were level as Ronan McNamara, John Prenty, and Jonathan Morrin added scores. Galway had totally lost their way in the midfield sector and the sideline replaced John Boylan, Cormac Bane and Michael Keane An Emmet Killeen tree was all Galway could muster as Mayo continued on the rampage. Points from John Prenty, Stephen Drake, and Brian Lynskey had Mayo two points in front entering the final quarter. Mayo then became careless and had a succession of wides, but two Prenty frees added to their scoreline. Indeed their 11 second half wides gave Galway a lifeline as the game went into injury time. After Galway custodian Brian O'Donoghue made a superb save from Prenty, Galway's man of the match, Derek Mullahy pointed for the Tribesmen, but it was to be their last score. Mayo: D Clarke, P Lydon, P Navin, D Geraghty, M Mulvaney (0-1). S Drake (02), K Walsh. R McNamara Ki

Ronan McNamara. Mayo and Kieran McHugh. Galway contest a high ball during the Connacht Minor Football Championship final at McHale Park, Castlebar, Co Mayo, on Saturday evening. Photo: Mike Shaughnessy charge, but amazingly the team has not managed an All Ireland honour in that period. During the game Keane must surely have felt that his glory run had ended as the young Tribesmen, backed by many of the St Jarlath's College start, totally cast away the Mayo team in the opening quarter of this game. For 12 minutes Galway had Mayo outfoxed, outplayed, and outscorcd, but then it all went oh so wrong had Mayo on the rack and were scoring at will. Then, instead of continuing to play the same game, they stopped playing direct football. Suddenly, after giving the hall away to Mayo a few times, the green and red side put a few scores on the board and became a new team. Galway raced into a 0-7 to 0-1 lead, but amazingly scored only four points after that and one of those was scored late into injury time giving a repeatedly tried to stop the Mayo onslaught was wing back Derek Mullahs from Milltown. Mullahy constantly tried to get Galway back into the game, but he was given little support from his Galway colleagues. While some other Galway players did welt, they tacked the conviction to take the game by the scruff of the neck when it was drifting away and the Milltown player eventually found himself lighting a losing battle