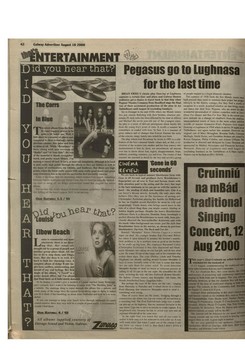 Pegasus go to Lughnasa for the last time

The Corrs In Blue

he latest album from the fam ily chart toppers proves to be quite a bit below par. Well, it falls short in a number of places and, compared to their irritatingly catchy previous albums, this pales and fails to shine at all. While "Breathless" is h e r e , a l o n g w i t h new versions ofj "Radio" and "At Your Side", the rest of the material is bland, straightfor ward, and pretty much lifeless. I'm making it sound all bad. It isn't, at least not completely, although it is hard to pick really high points through the album as they are hidden so well in the maze of synthesisers, tin whistle, and bodhran. But there are high points, when the band really amaze with some really good music and great song structures, but in the end the saccharine feel inevitably returns.

BRIAN FRIEL'S classic play Dancing at Lughnasa of people trapped in a frugal domestic situation. captures a certain time and place and Galway theatre The summer of 1936 finds the five Mundy sisters more audiences get a chance to travel back to that time when hard-pressed than usual to maintain their proper but meagre Pegasus Theatre Company from Headford stage the final lifestyle in the family cottage, but they find a world of r u n of their acclaimed production of the play in An escapism in a newly acquired wireless set that brings music Taibhdhearc until August 26 (excluding Sundays). and dance into their lives. Pegasus, who are noted for their Set in Donegal in the mid 1930s where the Mundy sisters wonderful presentation of riotous comedies such as Don't live just outside Ballybeg with their brother, returned mis Dress For Dinner and Run For Your Wife in the recent past, sionary Fr Jack (who has been affected by his time in Africa) now embark on a change of emphasis from the madcap, and Michael the seven year-old son of the youngest sister, unencumbered world of farce to the more sedate sublime the play is a series of delicate perceptions about family life worlds of master dramatist Friel. Pegasus first staged from the young boy's point of view. It recalls a summer he Dancing at Lughnasa in 1994 where it ran for 24 nights at an remembers as loaded with love. In fact, it is a summer of Taibhdhearc and again earlier this summer. However, the great sadness and of changes that forever fracture the unity original cast of Mary Monaghan, Brendan Duffy, Concepta of the eclectic, rangy family into which he was born. McHugh, Daithi Ryder, and Geraldine Holmes are joined by The play which took Broadway by storm in 1991 is a cele Roisin Duignan, Philip Cribbin, and Aideen O'Flynn. The bration of the boy's unusual family values and, as that, a cel production is directed and designed by Liam Thornton and ebration of the women (one mother and her four sisters) who sponsored by Mulroy Associates and Financial Services, demonstrated to him by deed, not preachment, all anyone Westport. Dancing at Lughnasa runs until August 26 ever has to know about fear, regret, disappointment, hope, (excluding Sundays) at An Taibhdhearc at 8.30pm nightly. industry, yearning, romance, joy and love. The events of that Tickets can be booked at (091) 563600 summer are narrated in detail by the boy and unveil a group

Some of the songs here are interesting, where Andrea Corr sounds something between Natalie Imbruglia and Sheryl Crow, but it's hard for even the interest ing ones to shrug off the dodgy commercial sound that plagues the entire album. Not too bad. but overly steeped in record company guidelines. Marinated, in fact, killing off the band's appeal. Well, to me anyway.

We are back in typical summer blockbuster form with Gone in 60 Seconds and producer Jerry Bruckheimer's fingerprints are all over it. Fast and furious stunts with little attention paid to the acting and the story line kept to the bare minimum so we can get on with the matter in hand - the stealing of sleek and beautiful cars. This is a car lover's dream movie. Actually the only ones who b e h a v e like they a r e in the b u s i n e s s of a c t i n g a r e O U R R A T I H G : 5.5 / 1Q Christopher Eccleston playing the baddie (to Hollywood he has an English accent therefore he must be evil) and surprisingly Vinnie Jones, who brings much more to the role of a silent thug than you might expect, hinting at hidden depths perhaps. Despite the heavy Bruckheimer influence there is a director, Dominic Sena. Seemingly a perfect director for Bruckheimer to work with, Sena pre viously directed the horror/thriller Kalifornia and with his music video background can create just the style that Bruckheimer loves in his movies, as shown in previous blockbusters: Top Gun, The Rock and Con Air. Randall "Memphis" Rains (Nicolas Cage) is a retired super car thief. His younger brother Kip (Giovanni Ribisi) has taken it upon himself to assume his brother's mantle. ouise is commercial and man Only problem is, he is nowhere near as good as his brother. ufactured; there is no deny So he stuffs up big-time. His employer Raymond Calitri ing t h a t . H e r s o n g s a r e (Christopher Eccleston) is less than impressed and black thought out by a group of people and I Q ( j ^ ^ J mails Memphis into taking on one last job, and oh boy what a n o t h e r group plays them. All she |, a job. He wants 50 top-of-the-range cars in his container ship has to do is sing them, and bingo,; within three days. The cops (Delroy Lindo and Timothy fame. But she does it so well, i t ' s Olyphant) are already sniffing around because Memphis is hard to fault her charming voice. A back in town. Actually some of the time it seems that those complete album of dodgy B-side sin two are only there for comic relief. To avoid detection gles here, soulless, uninteresting, and Memphis decides to steal (or boost as everyone persists in devoid of any real feelings. Her first calling it) all 50 cars in the one night. He assembles his old single of the album, "2 Faced" is a team: including the wily old Otto Halliwell (Robert Duvall); pretty decent effort, but I'm afraid the Sphinx (Vinnie Jones); and Memphis' old flame, the that from there on it sinks slowly downhill. blonde dreadlocked Sway (Angelina Jolie). To be honest. I couldn't give a monkey if Louise married Jaime Redknapp. But perhaps the stars of the show are the cars - ranging and I certainly don't want to be listening to songs with "The Wedding Song" as from Mercedes to Porsches and 4-wheel drives to a classic a subtitle. The marriage thing is roped through this album like a tumour, and Ford Mustang that whenever Memphis tried to steal it while many of the songs have the typical lovey-dovey edge to them, it makes something went wrong. you ill to think of her bambling on about some footballer and how he's so won Then of course there are the stunts. Dodging through a derful. construction site where one cop-car comes off second best to If you can manage lo keep your lunch down through onslaught of candy a wrecking ball. The Evel Knievel-style jump over a multicoated exterior, there may very well be a couple of good tracks. Unfortunately I car pile-up on the highway. But my personal favourite is the couldn't find them. one where Cage has to drive in reverse to evade capture. It is heightened only because he has to avoid cop cars and an Oun R A T H W C : 4- / IP eighteen wheeler all at the same time. At the same time you watch this and all you come to realise is how easy it is for someone to nick your car. It was All albums supplied courtesy of with some relief that when I came out of the cinema I saw Zhivago Sound and Vision, Galway. my little car where I left it. But then I don't drive a Mercedes or a Porsche.

year's 22nd Cruinniu na mBad festival i I X scheduled for te weekend of h 11-13 August, commemorating the traditional mar-| |itime links between Kim ara and Connemara. For An tAmhran Beo, this year marks the 12th anniversary of promoting and celebrating traditional singing in both Irish and in English. This year will be different, however, in that An tAmhran Beo will host a concert of the best of traditional singing in both lan-| guages. The concert, at the Community Hall. Kinvara.| on August 12, starts at 8.30 p.m. Amongst those participating in this year's concert arej well known visitors to An tAmhran Beo, such as Treasa Ni Cheannabhain, Josie Sheain Jeaic, Pauline Hanley, Padraig 6 Flaithearta, Ciarah 6 Concheanain, Sara Grealish, Mairtin Pheait 6 Cualain, Nan Tom Taimin, Fionnuala Nf Shiochru, Nora De Burca and others. Mairtin Jaimsie, as usual, will be the MC. The concert will be followed by our usual informal singing session and we look forward to hearing other |singcrs there as well. A great night is assured. We are very grateful to our sponsors: Udaras nl Gaeltachta, B6rd na Gaeilge, AIB Gort, BOI Gort, Murphys, and Kinvara Credit Union.