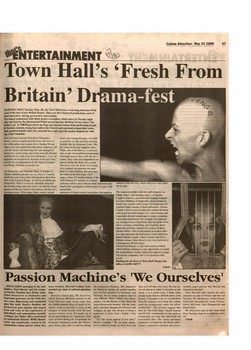 T o w n Hall's *Fresh F r o m B r i t a i n ' D r !a m a - f e s t
STARTING NEXT Tuesday (May 30), the Town Hall hosts a week-long showcase of the some of the best of new British theatre. There are three featured productions, each of them innovative, daring, provocative and exciting. The season commences with Mark Ryan's Castradiva, which plays on Tuesday night only and features the phenomenal Welsh mezzo-soprano, Buddug Verona James. The action is set in 1700 Rome where the Pope has banned women from performing in pub lic Instead, cast rati, young boys sold to the Church and castrated to keep their voices high, perform female roles, live colourful lives and enjoy the perfect disguise for visiting a lady's boudoir. Enterfictionalcastrato Pedrolino il Magnifico whose comical, complicated life forms the basis of this exhilarating one-woman show. Buddug Verona James (who has performed with opera companies all over the world) acts and sings her way through six characters, seven scenes and seven arias (by Handel and Gluck) in a truly bravura performance. A trio of musicians on harpsichord, baroque violin and viola provide the accompaniment in this Opera Cocktail and Theatre Mwldan co-production. On Wednesday and Thursday (May 31 & June 1), Theatre Absolute present Car, by Chris O'Connell, which last year won a Time Out Award as Best New Play on the London Fringe, as well as an Edinburgh Fringe First. This is a visceral, adrenalin-drenched tale of four young men who steal a car and the conse quences of that act, both for themselves and the car's salesman-owner. With sharp, filmic scenes, techno music and searing dialogue, Car pulls no punches yet also provides moving insights into its characters' lives. The key scene in the play happens when Nicky, one of the thieves, is arrrested and, as part of a mediation programme, is brought face-to-face, with the car's owner, Gary (who also happened to be injured during the theft). It's a scene that shows how the desire for revenge on a criminal can generate the same kind of violent feelings that provoked the crime in the first place. Car's author, Chris O'Connell (winner of the 1999 Pearson TV Award), is a former probation officer and so knows these characters inti mately. He's produced a rollercoaster of a play, with memorable moments of black comedy and pathos, that grabs its

audience from the very outset and never once slack ens its grip. The season concludes with two performances, on Friday June 2 and Saturday June 3, of Theatre Cryptic's Electra, a powerful new staging (scripted by Clare Venables) of Sophocles' classic drama of family loss, murder and revenge. Encompassing the original Greek concept of three performers, Theatre Cryptic's Electra also incorporates modern elements such as pre-recorded images, live video footage and a specially-devised soundscape to create a stunning visual and aural hybrid. For example, the nightmar ish, hissing voices of the Furies fills the theatre from above, creating a disturbing, awe-inspiring atmos phere that perfectly captures the essence of these ancient deities. This is total theatre at its most effec tive andrepresentsthe bold poetic vision which has placed Theatre Cryptic (whose founder and AD is Belfast woman Cathie Boyd) at the very forefront of contemporary British drama. Tresh From Britain', as this mini-season is billed, offers Galway audiences a rare opportunity to sample the extraordinary vitality, talent and range of younger UK theatre companies. Not to be missed in other words. Booking for all shows at Town Hall Theatre box office or tel 091 569777. CMcB

P A S S I O N M A C H I N E ' S ' W E OURSELVES'
SINCE FIRST emerging in the midEighties, Paul Mercier and his compa ny Passion Machine have firmly estab lished themselves as distinctive and important presences on the Irish the atre scene. High-energy and committed plays like Studs, Wasters, Buddleia and Kitchensink gave unique and urgent form and voice to the experiences of individuals and communities (notably 'ordinary joe' Dubs) often overlooked by mainstream threatre. While thematically and stylistically rooted in the communities about and for whom they were written, Mercier's plays tran scended any kind of cultural ghettoisation. Mercier's latest play, We Ourselves, which Passion Machine present at the Town Hall next week, moves away from the Dublin-centred focus of much of his earlier work to provide a vista of the changes in Irish society over the past quarter-century or so. It's made up of seven monologues by characters who were all born during the Programme for Economic Expansion in the late Fifties / early Sixties and came to maturity during the prosperous Nineties. The characters are linked by having all worked together one fateful summer in Germany and Holland, but in many respects they're very different. There's Mikey the school teacher, Una the theatre-worker, Emer the lawyer/housewife/mother, Pip the com puter whizzkid, Deaglan the Eurocrat, and Aonghus the gay who dreams of being a majorette in New York's Paddy's Day parade. "It's like seven aspects of one story," Mercier explains. " We see these charac ters at different stages in their lives and they each tell their own story. But the sto ries all add up to what I'd describe as one poem, a love poem even. I think some people might find it a difficult piece, to be honest, it demands a lot of concentration from the audience but I hope the writing (and the production) make the effort worthwhile." The reviews suggest that they do. The Irish Times David Now Ian specifically commented on the need to concentrate on every line and word hut concluded that "the sharp attention required is rewarded by the always affec tionate, sometimes irritated and occca,