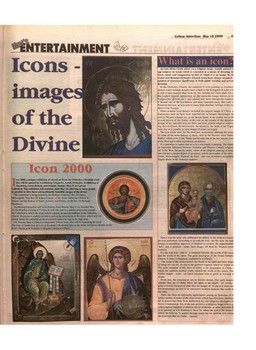 Icons images of t h e Divine
con 2000, a unique exhibition of sacred art from the Orthodox Christian tradi I tion will be opened by Archbishop Gregorios, Greek Orthodox Archbishop of "-^Thyateira, Great Britain, and Ireland, Sunday May 2 1 in Galway [Cathedral. T h e exhibition will continue until M a y 26, allowing as m a n y people las possible to view these extraordinarily beautiful images of the divine. The exhibition is being hosted by the Bishop of Galway, Rev Dr James jMcLoughlin, Very Rev Dr Ireneu Cracinn, of the Greek Orthodox Church in [Ireland, and the Bishop of Tuam, Achonry and Killala, the Rt Rev Dr Richard ;Henderson. Archbishop Gregorios will be in Galway from Sunday May 21 to Tuesday May {23. On Monday evening at 7.15pm he will take part in a solemn procession around jthe Cathedral in which the icons will be carried, an ancient tradition in the Orthodox Church. Everyone is warmly invited to join in the procession of the icons, which will culjmuiate inside the cathedral as the procession makes its way to the high altar. On Tuesday May 23 Dutch iconographer Solrun Ness, who will be launching her book Theology of Symbolism of Icons in Keohane's Bookshop later in the week, will give a lecture on her book's theme at St Nicholas Collegiate Church at 8.00pm. -

What is an icon?

O t h e r p o p u l a r icon t h e m e s included the a u g u s t i m a g e of C h r i s t a Pantocrator; here we have Jesus depicted not, as became increasingly th case in Western religious art, as the human figure O the teacher but as th F second person of the Trinity in his role as the creator of the universe Images of key episodes from the Bible and from popular religious tradition (eg, the crucifixion, the resurrection, the ascension, the death of the Virgin were also very popular, as were images of saints and angels. The icon artists were, for the most part, anonymous, although the names of some of the most famous of them, such as the Russian artist Andre Rublev, whose icon of the Trinity has become one of the best known icons in the West and is often reproduced, are known. It is important to realise that an icon is not simply a painting. This marks an important difference between Orthodox and Western Catholic religious art. In the West, the purely artisuc values of the religious painting or sculp ture claimed a greater degree of autonomy, and the personality of the artist Giotto, Michelangelo, Raphael, da Vinci - also was accorded a recognition largely absent in the Orthodox tradition.

Here it was the artist who sublimated his artistry to the religious functio jthe icon performed. Everything to do with the icon - the flat style, the indif jference to naturalistic depiction of character or scenery, the unquestionabl J 'holy' aura it presents - marks these images off from the Western artisu tradition. For the icon was - and is - a midpoint between the world of the sense and the world of the spirit. The great theologian of the Greek Orthodo Church, St John of Damascus, explained it as follows: The world of the senses mirrors the world of the spirit and from image of things we can see, we rise to the spiritual originals which we cannot se T h e great exemplar of this view of reality is the Incarnation of Christ, i which the supreme spiritual reality entered the world of the senses. Thu visible images - icons - of Christ incarnate help to guide us towards th divine. From this, the c o n c l u s i o n can be further d r a w n , that such i m a g e s whether they are of Christ, Mary, the saints or the angels - are worthy great reverence because of what they are images of. To put it in more mo e m terminology, an icon is an interactive medium between this world an the other. There has been an increasing appreciation a m o n g art historians of th artistic quality of many of the finest icons, which has often been instrume tal in preserving t h e m from destruction by anti-religious ideologies lik Soviet C o m m u n i s m . Yet, in the end, an icon is a religious image with a sp cific religious function; to dismiss this as irrelevant, as some historians d is as ignorant as it is insulting to those for whom the icon is the means b which the believer "is guided through matter by our spiritual eyes toward the prototype that we render... honour."