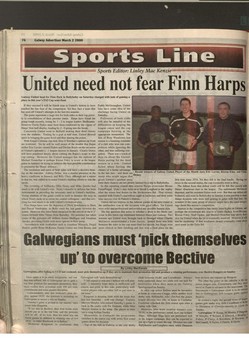 Sports
Sports Editor: Linley Mac
Galway United head for Finn Park in Ballybofey on Saturday charged with task of gaining a place in this year's FAI Cup semi-final. If they succeed it will be fourth time in United's history to have Paddy McGrenaghan, United reached the last four of the competition. Yet they face a team that fans have some idea of the challenge facing United on has seen off United's attempts in the last two seasons. The game represents a huge test for both sides as their top priori Saturday. ty is consolidation of their premier status. Harps have found the F o l l o w e r s of both clubs going tough recendy, losing by 3 - 2 to league leaders Shelbourne. will also be mindful of the However Gavin Dykes must have been comforted by the vigour of difficulties in keeping the Harps' first half display, leading by 2 - 0 going into the break. l e a g u e c a u s e and the c u p Conversely United went to Belfield seeking their third victory c a m p a i g n b u r n i n g at the over the students. Trailing by a goal at half time, United showed appropriate momentum. The fate of Bray Wanderers last spirit in bringing the game level and thus sharing the points. With Fergal Coleman cup-tied, Don O'Riordan's options up front season is a haunting reminder are restricted. Yet he will be well aware of the trouble that Bajan of a club who won one com striker Eric Lavine caused Dykes and Declan Boyle on the occasion petition while ignoring the of United's splendid 2 - 1 league success in January. Clearly Dykes other, and thus suffering rele will have pondered deeply about curbing the Bajan's scope in this gation. There was a touch of cup outing. However the United manager has the options of deja-vu about the U n i t e d Michael Donnellan or perhaps Kieran Foley (a scorer in the league Harps pairing for the third game in January) in trying to achieve the best possible combination s e a s o n in a row. U n i t e d failed w h e n h a v i n g t h e to pressurise the Harps' defence. The resolution and spirit of both sides will have a decisive bear chance of a home advantage ing on the outcome. Aubrey Dolan was a manful presence in the heavy conditions in January, and Billy Clery, although not a starter in that tie, was called in to assist United's batding efforts to win the spoils. The covering of fullbacks Ollie Neary and Mike Quirke had much to do with United's win. Neary's transfer to defence has been instrumental in providing the necessary steel to United's backline. Young students of the game could to well to monitor the way in which Neary tucks in to cover his central colleagues - and that cov ering has had much to do with United's revitalised play. Finn Harps have seen the departure of Mark Hutchinson to Shels and Pascal Vandequin to Bohs since the last game between the teams. However they have been energised by the arrival of the 6'2" centre forward Mike Turner from Bamsley. His presence has taken some of the pressure off strikers James Mulligan and Jonathan Speake, providing Dykes with more options in their game. Nevertheless with footballers such as Jonathan Minnock, Fergal Harkin. goalie Brian McKenna, former United star John Kenny, and

in the last two - and there a r e ' y Hickey many w h o m i g h t argue that given United's spirited away form their chances are not greatly harmed by a trip to Ballybofey. In the o p e n i n g r o u n d this season H a r p s o v e r c a m e H o m e Farm/Fingal. Dyke's men went on to thrash Longford in the replay after the teams had drawn on the Strokestown Rd. That victory equated with United's marvellous night in Inchicore and their extra time success over St Patrick's Athletic. United did not impress in the Athlone games in the next round as the midlanders rose to the occasion with good effect. Yet United were solid and professional and avoided any possible banana skin. The big question that arises is whether a draw is the likely out come in this latest cup instalment between Harps and Galway. Two seasons ago United were brought back to Donegal where Charlie McGeever masterminded a home success. Indeed there was litde between the sides in the cup semi-final last season, but Harps were more clinical in their finishing and thus won a final place for the

Player of the Month were Eric Lavine, Kieran Foley and Eddie first time since 1974. Yet they fell at the final hurdle. Having led twice in the second replay, the cup eventually went to Bray. The fallout from that defeat could still be felt this season with Harps' disastrous start to the league. The unfortunate McGeever departed, and his assistant Dykes took over. But that cup defeat still bothered, and even in Ballybofey in January it was possible to meet Harps loyalists who were still getting to grips with that loss. On wonders if the same group of players might have the same misgiv ings about this season's competition. Interest in the competition has rarely been higher in Galway, and perhaps the recruitment this season of Eddie Hickey, Scott Morgan, Kieran Foley, Niall Ogden, and Michael Donellan may prove deci sive for United when the tie is eventually resolved. However it will not be surprising if that resolution should eventually come about next week on the Dyke Rd.

By Linley MacKenzie Galwegians, after falling to UCD last weekend, must pick themselves up if they are to maintain their promotion bid and produce a winning performance over Bective Rangers on Sunday. Once again it is an away assignment, and one Galwegians will "pick themselves up". that was refixed, but if Galwegians are to gain a "I full expect to win and I believe we will play top four position for automatic promotion, they well. I sincerely hope there is sufficient self must realise their potential with 100 per cent esteem and pride in this side, particularly with commitment and some greater discipline. several players who are either full or part-time in Understandably after last weekend's poor dis the team." play against UCD the pressure is mounting on Kingston is keeping faith with the team that Galwegians to secure a win on Sunday. lost last Saturday - with one change. Captain "Sunday's game is pivotal to our season," says Mervyn Murphy, who missed Saturday's game, is coach John Kingston. back in the centre with Pat Duignan, while Matt "If we win in Bective, then four home wins Mostyn returns to the wing. The player to miss should put us in the top four, and the pressure out is wing Killian Dooley. will be off. If we lose, then we must win our M e a n w h i l e in C o n n a c h t the p r o g r a m m e home games in addition to winning one of two switches to the junior cup with seven first round away - to either Blackrock or in Belfast." games down for decision. H o w e v e r K i n g s t o n is c o n f i d e n t t h a t Top of the bill in Galway is the city derby clash between OLBC and Corinthians. Always hotly contested, these two clubs will not lack for m o t i v a t i o n w h e n they meet at the G a l w a y Sportsground on Sunday. In other cup action Ballina must be favourites at home to overcome Creggs, while another local derby sees Ballinrobe, who clinched the junior league division two tide, at home to Castlebar. Castlebar clinched the first round spot after a replay with Gort. Monivea, who were surprise winners over NUIG in the preliminary round, host cup holders Sligo. Although Sligo have not performed well in the league campaign, they can be expected to put up a fight to retain the cup. Division two side Ballyhaunis and Loughrea meet, while Dunmore

Galwegians must 'pick themselves up' to overcome Bective
host division one runners-up Westport. The other big game on the calendar is the top junior league side, Connemara, and they must travel to Tuam to advance to the next round. The Buccaneers v Galwegians clash is to be refixed due to Galwegians AIB League game against Bective In women's rugby the second series of league games gets under way with Corinthians at home to S h a n n o n at C l o o n a c a u n e e n at 12pm on Sunday. Galwegians: W Ruane, M Mostyn, P Duignan. M Murphy, P Boland, E Elwood, J Heaslip. J F a h e y , P C l e r y , A K e r s h a w , D Browne, M McConnell, N Taylor, J Charlie, B Gavin.