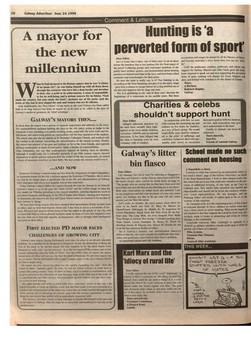 hen St Paul declared to his Roman captors that he was "a citizen of no mean city", he was lining himself up with all those down through the centuries who have felt a deep loyalty and devotion to their city: a pride in its achievements, a sense of responsibili ty for its well-being, and a serious concern for its future. "God made the country, but man made the town", declared one of the poets. And the town, or city, has in turn shaped the men and women who are its citizens. And, traditionally, the 'first citizen' of any town or city (and Galway has been called both in its long history) has been its mayor or, as he used to be called in the days of Galway's medieval greatness, its 'chief sovereign'.

Dear Editor, Isn't it ironic that it takes 'one of their own' to rat on them before the butchery that is fox hunting hits the front pages of the press? Lobbying groups and concerned members of the public have written, spoken, and demonstrated about hunting practices in Ireland until blue in the face, and have been called extremist and scaremongers for their pains. So now the truth is really out, is it? Fox hunting is ok, according to Mr Tom Hardiman, but play it by the rules, chaps - give foxy a chance to escape before he is dug terrified out of his den and ripped to bits by dogs and men. Yes, it is gratifying to see 'one of their own' develop the beginnings of a conscience in his middle years. But these

accusations will simply be denied by all the Masters of Hunts, and become yesterday's news faster than you can say 'tallyho'. Until the politicians, retailers, publicans, and others who support the Galway Blazers and other hunts grow the back bone required to speak out and stop supporting this perverted form of sport, nothing will change for foxes, badgers, and deer, and Ireland will continue to be the shame of Europe. Yours, A Herbert, BaUybrit Heights, Galway.

G a l w a y ' s m a y o r s then....
In those days the mayor was a person of supreme importance and authority in the town. His responsibilities included holding the keys to the city gates; acting as judge in the Hundreds Court; presiding over public building works, especially the town walls and for tifications, and supervising prices on commodities and the free operation of the markets. The mayor was also the lay patron of St Nicholas' Collegiate Church, and worked with the warden in all matters concerning the administration of the church revenue. Finally, the mayor was admiral of the port and harbour as far as the Aran Islands, and supreme military commander in times of emergency. Quite a burden of responsibilities. And, fortunately, not one that contemporary mayors of Galway have to shoulder, although it would make for a colourful spectacle if our 20th century mayors dressed themselves in naval uniform and patrolled the waters of the bay occasionally, or carried a brace of enormous iron keys on their belts. We feel certain the tourists would love it.

harities & celebs shouldn't support hunt
Dear Editor, Alleged inhumane practices by the hunt have recently been high lighted in the local media (Galway Advertiser 1676/99) and on national television. It has been alleged that the hunt is breaking even its own voluntary code of conduct. In conjunction with this, we note with concern the increasing use and reliance on fox hunts, by charities, as a way of fund raising. We would respectfully urge charities (dedicat ed to the relief of suffering) and celebrities (whatever their own per sonally held views) to reconsider their participation with fox hunts as. we feel, their association may give) tacit endorsement to the hunt. Cruelty to animals can never bej condoned. Yours sincerely, Ann Fox Friends of Animals Galway.

...AND NOW
However, if Galway's mayors today are free from the obligations of supervising prices, or mustering troops for the city's defence against the ferocious O'Flahertys, this is not to say that he no longer plays a significant role in the life and administration of Galway. Only nowadays that role is less tangible, but no less important. Today Galway's mayor makes his impact through the tone he chooses to set himself. Galway's mayor is, as in the past, the 'chief citizen' and the visible image of what the city stands for. Whether presiding in the council chambers, greeting dignitaries (such as presidents Kennedy and Reagan, or the SDLP leader John Hume), opening new factories or businesses, the mayor is the face and figure whose words are listened to for an idea of how Galway is 'doing'. We have had strong mayors who have stamped their personalities firmly on their time of office, and we have had mayors whose task it has been to act as a reconciler of fac tions. We have had mayors whose sense of fun has added to the gaiety of our city, and we have had mayors whose.shrewd business sense in times of crisis has helped to save the day. And we've had lady mayors, or mayoresses, who've brought both intelligence and grace to their office.

F i r s t elected P D mayor faces CHALLENGES OF GROWING CITY
Galway's new mayor, Declan McDonnell, now takes his place in an old and venerable tradition. As a member of the Progressive Democrat, he has the distinction of being the first of his party to be elected mayor (he also happens to be the third mayor from Renmore as well). And - last but not least - he is the last mayor of this century and of this second millennium after the birth of Christ. And that makes him, of course, the mayor whose term of office will see our city into the third millennium. No previous mayor can say as much; Declan McDonnell will occupy' a unique place in the city's history before he does a single thing. Of course our new mayor has plans for our rapidly expanding city, and - from the sound of them - laudable plans. He aims, he told his fellow citizens, to work hard to ensure that young couples, many of them so badly stuck in rented accommodation, will be given priority in the allocation of new housing. And, at the other end of the scale, he is concerned that our older citizens, who sometimes get left behind, will also have read ier access to new housing. His other priority will strike a chord with every concerned citizen of this city - the urgent necessity to clean up Galway. a task that has been made even more pressing as a result of the reconstruction of the inner city. Litter bins are badly needed throughout the town, and the job of educating all citizens, especially the younger generation, is some thing the new mayor has said he will be particularly concerned with. The Galway Advertiser issues a warm welcome to Declan McDonnell in his new role as the mayor of Galway. May his reign be as successful and beneficial to our city as his ^>redescessers.

A Eagarthdir, a chara. Dear Editor, Contrary to what was asserted by an anonymous writer on City manager Joe Gavin must be referring to Singapore's last week's letters' page of the Galway Advertiser, on behalf litter bins, not Galway's. In the Galway Advertiser of 6717/99, of the Bord Bainistiochta, I wish to state unequivocally that Mr Gavin clearly states (article by Keith Kelly on page 6), this school did not at any time make any comment on the pro "The people who are saying that no bins have been provided vision of additional housing, of any type, in the Cnoc na have either not seen the bins or are choosing not to see them". Cathrach area. This totally false assertion was hurtful and Well, after overcoming my initial shock and disbelief, I put objectionable and should not be given any credence whatso on my eyeglasses and did a bin inventory of every city centre ever. Local representatives, the city manager, and the street, my findings are that in 80 per cent (24 city centre Planning Office will testify, if called upon to do so, to the streets) not one litter bin exists. veracity of this response. Let's make no mistake: the street names where there are As vacancies arise, it is the continuing policy of this school none to be found are: Eyre St; Mary St; Market St; to welcome through its doors children no matter what their Upper/Lower Abbeygate St; Middle St; St Augustine St; race, colour, creed, or social standing. What we do require of Lower Merchants' Road; Dock Rd; New Dock St; the har our families is that they support the school in every way, par bour area; The Long Walk; the river footpath from Wolfe ticularly when it comes to promoting and using an teanga Tone Bridge to Salmon Weir Bridge; Cathedral parking area: Gaeilge in the community. Nuns Island; Lower Dominick St; Henry St; Flood St Leanfaidh Gaelscoil Mhic Amhlaigh ar aghaidh ar a Bowling Green; St Vincent Ave; Queen St; Forrest St; not dicheall ag tabhairt seiribhise chomh maith agus is teidir do even the bus station at Bothar nf either! phobal uile Chnoc na Cathrach. So if Galway's number one administrator sincerely Mise, le meas, believes that the city centre already has sufficient litter bins Uinseann Mac Thomais, ladies and gentlemen, then Galway does have a problem. Runai, A concerned citizen and city resident. Gaelscoil Mhic Amhlaigh.

Karl M a n and the i d i o c y of rural life'
Dear Editor, I really enjoyed the use of the word "slightingly" in relation to Marx's comment on "the idiocy of rural life. Indeed, how could he say such a thing? It is a well known fact that to be a serf, working in slave-like con ditions under the Tsarist regime was bliss. The poor man obviously didn't think so, but then, unlike the edi tor of this paper, he probably didn't have a clue as to what it was really like. Yours sarcastically, Veronique Castellanos, 4 Glenard Road, Salthill.