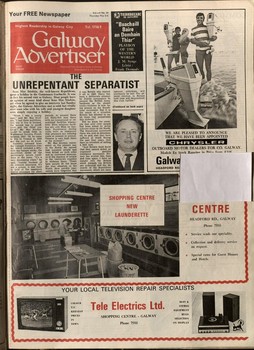 , Galuucry Atwertiser
SHOP STREET Delivered free to every home in Galway Distributed in the County

THE
Sean Mac Stiofain, the well-known Republican, spent a holiday in the Connemara Gaeltacht. It was in fact h i s second visit to Galway. Most people have an opinion of some kind about Sean Mac Stiofain, yet when he agreed to give an interview last Sunday night, t h e Galway Advertiser met a mild but vividly alert man who with his wife and youngest daughter were simply enjoying a holiday.
"When I was a young man," said Mr. Mac Stiof ain, "I had t h r e e ambitions. One was to live in Ireland, the second was to speak Irish and t h e third you know." Mr. Mac Stiofain learnt to speak Irish in Wormwood Scrubbs Prison between 1953 - '59, h e came to live in Ireland in 1959 and t h e rest we do know. Recently released from the Curragh Detention Cen ter, which included a fiftynine day h u n g e r strike, the republican spoke of t h e particularly severe condi tions at t h e camp. " I t ' s a very depressing place," he said, "mainly because of its extreem smallness. It's not a prison; it was built to hold at the maximum twelve prisoners for short

UNREPENTANT SEPARATIST
periods. At present there are thirty-five men there with no recreational or ed ucational facilities whatso ever. Even religious facili ties a r e only Mass on Sun days. Supervision during visits were so restrictive that prisoners a r e refusing visits a t present in protest. Tension is very high there at t h e moment." Mr. Mac Stiofain comm ented on t h e present war in the North. He agreed t h a t innocent people had been killed on both sides and he expressed annoyan ce at the reaction of people in t h e twenty-six counties to violence there. "Down h e r e people do n o t know t h e t r u e situation in the North. How quickly jour nalists have forgotten that

national principles, will it was Britain who started eventually be met. The ge it all in 1969. There has neral election in Britain been a deliberate attempt next year will demonstrate by Dublin newspapers to this even further." present the British Army handouts as the gospel truth--violence is now be (Continued on back page) ing pinned on the Repub lican movement. But it is the result of a situation Britain has allowed to ex ist there that perpetrates this violence." Did we know for exam ple that over cixty people had been killed by Army vehicles alone in the North. T h e Republican movement there was now so determin ed, he said, that they have suffered so much during the past four years, they have no intention of calling a halt now. "And Britain must know that they cannot defeat an organised guerilla resistance movement. His tory has proved this, time and time again. I have an insight into the British mind. Already the British are sickening and the de mands of the Republican movement, which are basic

ARE PLEASED W E HAVE