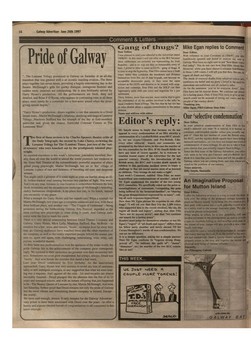 Pride of Galway
"...The Leenane Trilogy premiered in Galway on Saturday at an all-day marathon that was greeted with a art ecstatic standing ovation...The three plays together last seven hours, providing a hugely entertaining day in the theatre. McDonagh's gifts for quirky dialogue, outrageous humour and sudden nasty surprises are exhilarating. He is also brilliantly served by Garry Hynes's production. All the performances are fresh, deep and detailed, and Brian F O ' B y m e , who appears in contrasting roles in all three plays, must surely be a contender for a best-actor award when the prizegiving season begins." "Garry Hynes's production...draws together a cast that amounts to a Druid dream team...Martin McDonagh's hilarious, shocking and magical Leenane TriIogy...Maeliosa Stafford has the triumph of the day as foul-mouthed, patricidal and, given the chance, fratricidal Coleman Connor in The Lonesome West".

Dear Editor, I was pleased to read your editorial in the Advertiser dated 19/06/97. In this letter I will not refer to the IRA because these subhumans are certainly not representing the Irish Republic - and in no way are they an honourable army of men. I prefer to refer to same as-GOTs - gang of thugs. It is time to stop the hypocrisy. Sinn Fern cannot have it both ways: either they condemn the murderers and distance themselves from this out of date brigade, and become an acceptable democratic party, or they wear the same colours as the GOTs and deserve to be treated with scep ticism and contempt. Sinn F6in and the SDLP can then legitmately unite with one voice and negotiate for a just settlement. Gerry Adams, more than anyone, must realise that to gain the confidence of all the parties involved in the talks he must condemn these killings. The fact that he has not has to raise doubts about a sincere commitment to the peace process. Name and address with editor

Dear Editor, With reference to your Comment of 19/6/97, you who fastidiously ignored and failed to analyze my vote in Galway West have no right now to ask "how those voters feel today". You do not care how Sinn F6in voters feel. However, while you have shown a constant indifference to those 1,209 voters, I will tell you that they, like me, do regret all death and injury. The shock of renewed deaths from whatever source only reinforces my belief and my party's belief in the need for immediate unconditional and all inclusive talks. As for the sentiment 'you've let everyone down", Sinn Fein have not let anyone down. We continue our search for a lasting peace. Only if Sinn Fein were to give up that search could we be accused of letting our voters and the people of the country down. Thanking you, Mike Egan, PRO Galway Sinn Fein

Editor's reply:
Mr Smyth seems to imply that because we do not append to every condemnation of an IRA atrocity a condemnation of a Loyalist/British army/RUC atroci ty, we are crypto-Unionists and Pro-British. Like every other editorial board, our comments are prompted by the latest news, in this case the murder of the two constables by the IRA. If Mr Smyth thinks we have any kind of 'secret agenda', he is welcome to examine bound copies of the Advertiser for the last quarter century. Finally, his introduction of the British army, the RUC and Loyalist death squads in relation to this particular incident seems to imply a challenge to that old moral maxim most of us learned as children, 'Two wrongs do not make a right'. Last week's Comment, entitled 'Sinn Fein: no more hypocritical non-condemnations of murder', asked if Mr Egah condemned the murder of the two young RUC constables. We specifically ruled out the point or meaningfulness of statements "recognising the pain being suffered by the bereaved families", or "sharing the great disappointment expressed by so many", call ing all such responses hypocritical. How does Mr Egan phrase his response to our chal lenge? "I will tell you that they [viz the 1,209 voters who supported him in the recent election], like me, do regret all death and injury", adding that Sinn Fein "have not let anyone down", and that "we continue our search for a lasting peace". Readers must judge for themselves whether or not Mr Egan's "regret" of "all death and injury" differs from his fellow party member and newly elected TD for Cavan-Monaghan's words of non-condemnation. We can see no difference. It is a simple question, asking for a simple answer: Does Mr Egan condemn (ie "express strong disap proval o f , "to indicate the guilt o f , "damn", "denounce", etc) the murder of the two RUC consta bles or not?

Our 'selective condemnation'
Dear Editor, In your selective condemnation of Sinn Fein in last week's editorial you state "It is natural, it is human, to condemn cold-blooded murder unless you covertly sup port it". Over the last number of years the British army, the RUC, and the loyalist death squads have been killing innocent nationalists, yet you have not issued one word of condemnation of these killings. So are we to take it from your silence that you covertly support these killings. Since the first issue of the Galway Advertiser, you edito rials seem to be very pro-Unionist and pro-British. So I think it is time that you come clean and tell the people of Galway where you are coming from, and state where you, stand on the partition of our country. Yours sincerely. Billy Smyth, Shantalla

h e first of these reviews is by Charles Spencer, theatre critic of the Daily Telegraph; the s e c o n d by L u k e Clancy, reviewing the L e e n a n e Trilogy for T h e ( L o n d o n ) T i m e s , j u s t t w o of the 'outof-towners' w h o w e r e k n o c k e d out by the prodigiously talented play wright As reported elsewhere in this week's Advertiser, journalists travelled, liter ally, from all over the world to attend the world premiere last weekend at the Town Hall Theatre of the extraordinarily powerful sequence of plays gifted young playwright, Martin McDonagh, has set in 'his' village of Leenane, a place of rain and darkness, of brooding old men and desperate women. You might catch a glimpse of it some night as your car hurtles along an illlit, broken-backed road running between two patches of light. You won't find it on any map, because its true location is somewhere between the low, bleak mountains and the incandescent landscape of McDonagh's brooding, darkly humourous imagination. A no-place that can, in his hands, remind you uncannily of any-place. What a triumph for Garry Hynes and her superb cast! What a triumph for Martin McDonagh, two years ago a complete unknown and now, with these three brilliant plays, and another one - 'The Cripple of Inishmaan' - being presented during the forthcoming Galway Arts Festival, regarded as the most exciting new playwright to c o m e along in years. And Galway audi ences were the first to mark his cards.

A n Imaginative Proposal for Mutton Island
Dear Editor. 1 offer the following proposal as a way to break the dead lock over the siting of the proposed sewage treatment plant on Mutton Island. At its heart lies the creation of a new park, with a pond and a cycle path that would serve as a utility road to the sewage treatment plant. The pipe would be placed underground. What would, in effect, be a new peninsula, will add another kilometre to the existing prom, as well as provide a spot for excellent fishing, as well as a fine cycle path. In the Course of time, nature will also provide a new. clean beach, (see map) The infill for such a venture can be provided by dredgers and cranes hauling the rocks from the seabed at the west ern and eastern side. Such a facility should enhance the property prices in the area, and improve the mental and physical well-being of Galway citizens. Sincerely, Joe Pilkington. Galway

There is a very special relationship between Druid Theatre Company and Galway. Garry Hynes, Mick Lally, Maeliosa Stafford, Ray McBride - to mention but a few were, and remain, 'locals', no matter how far away they may go. Galway audiences have watched these and the other members of the company, as well as the vitally important people behind the scenes, pre sent us, again and again, with challenging, entertaining, wise, witty, sad, joyous, wonderful theatre. As their fame and professionalism w o n the applause of the wider world, the pride Galway felt in the achievements of the company grew correspond ingly. We rejoiced in their successes; w e groaned over their occasional fail ures. Sometimes w e e v e n grew exasperated, but always, always, Druid was 'family'. And w o e betide the outsider that dared a bad word. Last year Druid celebrated its 21st birthday. A s the anniversary approached, Garry Hynes w a s very anxious to avoid any hint of sentimen tality or self-indulgent nostalgia, or any suggestion that what w e were hear ing was a requiem. And, against all the odds - for anniversaries are almost inevitably funereal - Druid plunged like the phoenix into the fire of its 21 years and emerged reborn, and with an instant offspring that just happened to be - The Beauty Queen o f Leenane by one, Martin McDonagh. And now, last Saturday, further proof that Druid remains not only the pride of Galway but the most vibrant and stimulating theatre company in Ireland, Europe the world!. We have said enough, almost. It only remains for the Galway Advertiser very proud to have been associated with Druid over the years - to offer a hearty and pigeon-chested hurrah of congratulations to all concerned in this latest triumph!