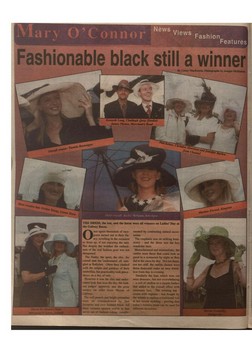 T H E DRESS, the hat, and the horse were all winners on Ladies' Day at the Galway Races.

nce again thousands of race goers turned out in their fin ery, revelling in the occasion to dress up, if not enjoying the rain. But despite the weather the enthusi asm of the real fashion goer was not dampened. The flashy, the sport, the chic, the casual and the understated all min gled at Ballybrit. Often they clashed with the stripes and paisleys of their umbrellas, but practicality took prece dence on a day of rain. However it was the chic and under stated look that won die day, the fash ion judges' approval, and the prize money on offer from Moons of Galway. The soft pastels and bright primaries were all overshadowed by that favourite and ever faithful black. AU three winners sported outfits in that never out of fashion colour, comple

mented by contrasting natural acces sories. The emphasis was on striking femi ninity - and the dress was the key wardrobe item. Monochromed and minimalisdc, the outfits were those that could look as good in a restaurant by night as they did at the races by day. Not too fussy, not too stiff, the outfits chosen were those thatcould make an easy transi tion from day to evening. Similarly the hats which won out were dramatic, but not overwhelming - a veil of chiffon or a simple feather that added to the overall effect with minimum fuss. The winning hat cream with organza - was bought by the winner to replace a traditional veil at her recent wedding - proving that today's fashion items can be used for different occasions.