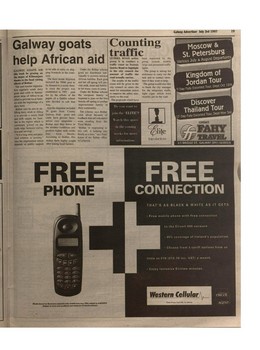 Galway goats Counting traffic help African aid
GALWAY GOATS will this week be grazing on the slopes of Kilimanjaro thanks to the fund raising efforts of Bothar. The anti-famine organisa tion regularly sends dairy goats and cattle to famineprone areas of Africa in an effort to provide local farm ers with the beginnings of a dairy herd. Bothar says its aim in air lifting dairy stock to Africa is to provide a steady food and milk supply for fami lies in the region which is constantly poised on the knife edge between starva tion and survival. "It is a long-term and prac tical solution to poverty," says the organisation which depends on public support to be able to carry on ship ping livestock to the conti nent. The most recent shipment included the 500th goat to be donated to a needy fami ly since the project was established in 1991 - paid for by the efforts of the pupils of a Dublin school who decided to call him Joey. And the shipment included 36 goats from County Galway. Irish goats and cattle have proved them selves very adaptable Bothar says they thrive in the weather conditions and produce higher milk yields than local breeds. According to Bothar, this makes them highly sought after among local farmers. Under the B6thar scheme goats are distributed indi vidually to poverty-stricken African families. Each goat and her off-spring will pro vide milk, meat and fertilis er for many years to come. Under the Bothar scheme the recipient family required to pass on the first female off-spring to another impoverished family in their community. The scheme, says Bothar came about because of feedback that aid volunteers were sending from the Third World. "B6thar, in responding to this call, is helping one family at a time," says Peter Ireton of the B6thar office in Limerick. QUIRKE ROAD action group is to conduct a traffic count on Seamus Quirke Road to highlight to the city council the amount of traffic the road actually carries. The results of the traffic count will be given to the city council to stress the need for immediate action to improve the safety stan dards on the road. The proposals which have Do on w ant to join the W ateh ELITE'? space

been requested by the group include rumble strips and permanent traffic lights. The group is asking for assistance to carry out the task and to contact mem bers if they wish to help. The group would also like to thank the city manager for the temporary traffic light signs which were recently put on the road.