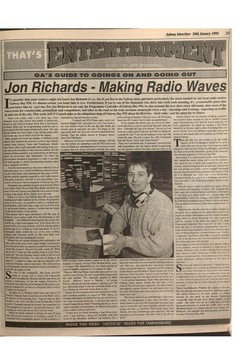 t's possible that some readers might not know Jon Richards to see, but if you live in the Galway area, and more particularly the areas reached by our local radio station Galway Bay F M , it's almost certain you know him to hear. Furthermore, if you're one of the thousands who drive into work each morning, it's a reasonable guess that you know him by sight too. For Jon Richards is not only the Programme Controller of Galway Bay F M , he also presents his own show every afternoon, does most of the voice-overs for commercials, promotions and competitions, and takes to the road on his truly awesome motorcycle twice a day - mornings and evenings, reporting on traffic in and out of the city. This week Jeff O'Connell talks to the ubiquitous man of Galway Bay F M about his first love - local radio - and his plans for its future.
characteristic that still aUaches to him. "I walked into WLS Pirate radio, which was

There was a time, only a few years ago, when Galway's local radio station was widely if unofficially known as the worst in Ireland. Back then it was known as Radio West, and the programming could be said to have echoed the dull sound of that early name. Not only did the future not look bright, it was getting pretty diffi cult to see any sort of future at all for the station.

INSIDE THIS WEEK: "HATCH 22" HEADS FOR TAIBHDHEARC