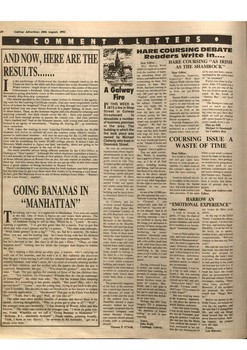 L E T T
Dear Editor, Mrs. Marion Webb (GSPCA) might do us native Irish the courtesy of learn ing something about our history and traditions before commenting on them. For instance, to state, Mrs. Webb, that hare coursing in Ireland was introduced here only 180 years ago by the "English" army sums up your whole knowledge of the subject. Contrary to what you might like to believe, Mrs. Webb, we Irish did have our own civilised society for hun dreds of years before our island was invaded by the "English". We had our own chieftains and high kings and hey daily hunted with dogs for boar, deer, fox, and hare. At that time we were worldwide known as the "Island of Saints and Scholars", without "English" rules to guide us. You are quite correct, Mrs. Webb, in assuming that I approve of hare cour sing, as I do of all field sports, including hunting and fishing. And I do not see that those of us who do par take in the above should have to make any apology to you or any other begrudger for the right to exercise our freedom in our own :ountry. As one of the 10,000 peo ple who attended this year's National Coursing Meeting in Clonmel I can categorically state that no hare had its "leg torn o f f as you alleged. And in all my years attending hare coursing meetings I feel I am justified in saying that the image you attempted to portray of hares being torn to bits is a complete fallacy, bordering on sensa tionalism. Admittedly some hares do die, but it is, let me add, a far swifter death than in the wild from foxes who hunt the hare and after im mobilising it, the vixen starts to eat it while it is still alive and her mate stands guard. Having witnessed foxes in action, one could never condemn hare coursing on grounds of cruelty without being hypocritical. All nature involves some ele ment of cruelty, M r s . Webb, and I was glad to read you do not eat lobster, but sad to read that you do not care to have this abolish ed on your own. Perhaps that Bill Tony Gregory TD is preparing might be extended to include "the abolition of lobster boiling" as well as hare coursing. Yours, John Scully Claddagh, Galway.

E RS
HARE C O U R S I N G " A S IRISH AS T H E S H A M R O C K "
ed by our own laws, unconDear Editor, Hypocrisy, hypocrisy, taminated by the soiled hand hypocrisy! H o w d a r e of " n a sassanach". If ever you come to CarMarion Webb criticise John Scully for his involvement in raroe, John, I'll stand you a one of the few things left to pint, as you are one of the us from our pre-British few not afraid to speak your mind. In the words of times. Marion Webb's criticism "Galway B a y " , our local is of the same nature as was anthem: ' 'The Strangers came and used to try and ridicule our Irish language. Hare Cour tried to teach us their sing is as Irish as the ways/And scorned us for be shamrock and has survived ing what we are. /Sure they throughout the centuries of might as well go chasing after moon-beams/Or light a British occupation. If people disapprove of it, penny candle from a star''. Slan go foil! fine, but it must remain im Michael O Domhnaill mortalised as a symbol of An Ceathru Rua bygone times, when we rul

AND NOW, HERE ARE THE RESULTS

A Galway Fire
N THIS WEEK in 1873 a fire in Shop Street in Galway threatened to devastate a number of business premises in the area. The building in which the fire took place was owned by Michael Cloherty who lived in Dominick Street.
He was an enterprising businessman whose regular advertisements in the local paper showed the range of goods which he sold. They included garden and agricul tural seeds, an extensive range of ironmongery, house furnishings, paints and guns and gunpowder. At about midnight a young man named Cooke saw sparks and smoke rising from one of the chimneys in the building and he raced down to Dominick Street to rouse the owner. As Cloherty and his assistant named Mullarkey reached Shop Street they met Lieutenant Lindsey of the 87th Regiment who was passing from the Castle Barracks to the Shambles. He rushed to the Shamble Barracks and soon had thirty men organised to fight the blaze. None of them knew where the water hydrant was but they managed to carry water from a tap and soon had the blaze under control. The event wakened up many people in Galway to the need for a fire brigade. The fire had been confined to a room which contained bedding and carpets. Had it extended to the room behind in which oil. turpentine and sulphur were stored there could have been a major disaster. The gunpowder magazine at the back of the premises was a particular hazard but the presence of mind of young Cooke and the work of the soldiers from the Shambles averted a major disaster. Indeed the local newspaper proposed that the insurance company with whom Michael Cloherty was insured should present Cooke with a substantial reward. Thomas P. O'Neill.

COURSING ISSUE A WASTE OF TIME
Dear Editor, In a world in which abor tion and gay rights have become to some people ac ceptable, it is sheer waste of this column's space to air issue like hare coursing. Issues on animals are on ly secondary to the real pro blems facing the human race, but some people have lost touch with realities and their priorities. If the same effort in last week's column was to be made on the above human issues, then perhaps we would not be going down the same path as our overseas counterparts who put issues relating to animals aboe human ones. Thankful ly as yet we Irish do not have a society that thinks more of animals than its people, Name and Address with Editor.

HARROW AN "EMOTIONAL EXPERIENCE"
Dear Editor, I wish to recount in public, if I may, the chain of events which led up to my present situtation, and which have resulted in my becom ing an "emotional refugee". I was in Paris earlier this year, and I saw advertised a "Pollution Demonstration" and I decided to support the cause.' However, when I ar rived at the predetermined spot, I discovered it to be a pro-pollution demonstra tion, not the usual anti pollution march, to which I am accustomed. Disconcerted, I went in to a bar to seek solace. T found it. She was standing at the bar, eating peanuts. I cruised up to her, and said, "Howyadoin' b a b e ? " And she said, ' T ' m d o i n ' swell." And I says " D ' y a wanna do a little better?" She was studying music at the Academy. Apparent ly, she plays the spoons in world famous orchestra. Later that same evening, I was on my knees beneath the Arc de Triomphe, pop ping the question. I told her she was just like the Mona Lisa (without the smirk). I even murmured in her ear that she was reminiscent of me Venus de Milo (with arms). At the top of the Eiffel Tower, I reached the climax of my speech. I looked into her eyes, and held her hand. Manfully, I took the bull by the horns (so to speak), winked at her, and muttered conspiratorially, "Will you consent to become my first wife?" She said she was busy for that week, but after that she w o u l d get a r o u n d to everything she hadn't time to do now. She smiled gent ly and said that if she could not become my wife (i.e. if she hada head-ache or had to wash her hair) she would place an advertisement in the personal column of some newspaper, reading, "Some other time, p e r h a p s " . However, if she accepted my proposal, the notice would read "Bingo, Bob by!" Before we parted at the Eiffel Tower, we looked out over the city together, and she said that I'd changed her life, and told me things about herself that she had never known before. Smil ing vaguely, she jumped over the edge. Yours, Len Harrow.