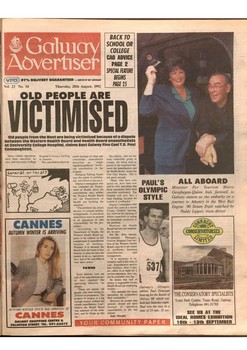 BACK TO SCHOOL OR COLLEGE

VICTIMISED
Old people from the west are being victimised because of a dispute between the western Health Board and Health Board anaesthetists at Unviversity college Hospital, claims East calway Fine Gael T.D. Paul connaughton.
Many routine operations have been cancelled, he says, and University College Hospital is facing a backlog in Autumn, The cancellations have occured because of what one consultant anaesthetist describes as "slight logistical problems" involv ing anesthetists in the hospital Professor Padraig Keane says the matter is confiden tial, and refuses to discuss it. Deputy Connaughton who has contacted the Depart ment of Health about the cancellations says neither the Western Health Board nor the Department of Health are tackling the situation. " T h e problem has arisen because of summer holiday arrangements. A consultant anaesthetist must be present at all operations to take responsibility for the pro cedure. . "According to the Department of Health, the Western Health Board ap pears to be without its full complement of anaesthetists because of h o l i d a y s . Whether it is because the Board does not want to hire locums, or does not have the money to do so, operations have had to be cancelled at very short notice." PAWNS Some patients were not told of the cancellations un til they reached the o p e r a t i n g t h e a t r e s , he alleges. "These are mainly old people, who were fasting for 24 hours in preparation. The propect of surgery is a big enough trauma without last minute cancellations. I can't believe the Health Board was unaware of the situa tion, and let things go this far." The elderly, who are the most vulnerable group in society, are being used as pawns in the argument bet ween the anaesthesists and the Health Board, insists the Fine Gael Deputy. This is not good enough. "Many who have con tacted me, have been now told by their specialists that these operations have been cancelled indefinitely. The hospital will now face a huge backlog, because the system is overloaded." Deputy Connaughton who raised this issue at a recent County Council meeting, has received the backing of fellow councillors in urging an immediate resolution to the problem. H o w e v e r the Health Board has not yet respond ed, he says. But Mr. Billy Moran, Progamme Manager, General Hospital Care sec tion of the Western Health Board, says he is not aware of p r o b l e m s between anaesthetists and management. "It is necessary to ra tionalise staff at this time of year. Anaesthestists need to take holidays. Also if they are called in at night for a serious operation, they may not be available next d a y . " He denies thai lack of money is responsible for the Health Board not employing locums. " T h e demand for these specialists far outnumbers their availability." However he accepts that patients should not have learned of operation cancellations at the last minute. Judy Murphy

Minister For Tourism Maire Geoghegan-Quinn bids farewell to Galway station as she embarks on a journey to Athenry in the West Rail Engine 90 Steam Train watched by Paddy Upper, train driver

WINTER STOCK HAS ARRIVED! AT