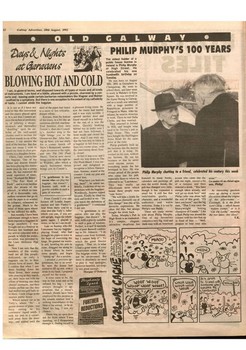 The oldest holder of a public house licence in Ireland is Philip Murphy of High S t r e e t . He celebrated his one hundredth birthday on Tuesday. He was born on August 18th, 1892 in Gortatleva in Claregalway. He went to school there, and later went to work in Walshe's in Eyre Square. He was involved in the Easter Rising in Galway, and as a result was interned with a large number of Republican prisoners in Frongoch in Wales. After his release, he went to America to work. There he met Delia Clarke, and they married.

Philip Murphy chatting
featured in many books, calendars and paintings all over the world. Inside, the pub has changed very little, though it has expanded a small bit. It still has that indefinable q u a l i t y -- character, and a wonderful ambience and warm welcome. Today it is run by Philip's son Paddy. There are many stories told about Philip Murphy. O n e of my favourites concern a very big, loud and dunk man with an American

accent who came into the pub one night, caused a bit of a rumpus and then ordered a drink. "You have enough taken already, and will get no drink here" said Philip (who was about half the size of this gent). "I'll have you know" says the big man, "That I was once the heavyweight boxing champion of Canada." Like a flash Philip was around the counter with his two fists up in front of him -- "Well, prepare to lose your title

amac!" Go maire tu an chead agus aon, Philip! An interesting question came up during a recent discussion about the origins of the placename -- Coolough. Is it the Irish word Culog -- which means "hidden corner," or is it "Cul Du Locha" meaning the two lakes. Any ideas! T.K.