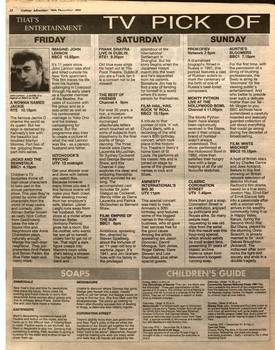 PICK
SUNDAY
PROKOFIEV Network 2 8pm AUNTIE'S BLOOMERS BBC1 7.15pm A dramatised For the first time, with biography filmed in the permission of a Russia in 1991, this portrait features a cast string of blushing of Russian actors to professionals, the mark the centenary of Beeb is airing its the birth of one of 'bloomers' for the Russia's best-loved viewing public's composers. entertainment. And who better to preside MONTY PYTHON over such a delicate LIVE AT THE matter than our Tel HOLLYWOOD BOWL Mr Wogan to you. Channel 4 11.05pm BBC archives have surrendered a carefully hoarded and jealously The Monty Python guarded collection of team have always just about everything been rapturously received in the States, that could go wrong during five decades of even if their unique broadcasting. brand of humour wasn't always understood. This FILM: WHITE show, performed at MISCHIEF the Hollywood Bowl in BBC2 10.15pm 1982, more than A host of British stars, satisfied their hungry led by Chartes Dance fans with a large and Joss Ackland, helping of all the old feature in this first favourite sketches. showing on British network television of director Michael CLASSIC Radford's film drama, CORONATION based on a true story. STREET Josslyn Hay, 22nd Earl UTV 7.45pm of Erroll (Dance) falls More than just a soap, into a passionate affair with a woman who Coronation Street is an institution, enjoyed arrives in his wealthy community living it up by politicians and Royals alike. So many in Happy Valley, Kenya, during the people kept Second World War. requesting to see old But Diana, played by clips from the serial that the result was this the stunning Greta Scacchi, is already hour-long special, married to Sir 'Jock' .wfrk^ishould satisfy Delves Broughton its mosfardent fans, (Ackland). The presenting 31 years of indiscreet affair soon classic archive rocks the tight-knit material taken from society and ends in a television's longestdouble tragedy. running soap.

FRIDAY
IMAGINE: JOHN LENNON BBC2 10.55pm It's 11 years since John Lennon was shot and killed outside his New York apartment. This film traces his life from his humble upbringing in Liverpool through his early years as a founder member of the Beatles, the years of success with the group and as a solo artist as well as his controversial marriage to Yoko Ono and his tireless campaigning for peace. But the programme also tries to create a picture of what the real Lennon was like - as a person, husband and father. HITCHCOCK'S PSYCHO UTV 12 midnight Get your shower over and done with before you watch this. Because however many times you see it this famous scene will make your flesh crawl. After stealing money from her employer's safe, Marion (Janet Leigh) runs away from her husband. She stops at a motel where Norman Bates (Anthony Perkins) gives her a room. But his mother, who wants her son all to herself, orders him to get rid of her. That night a dark figure creeps into Marion's room while she's taking a shower. The curtain is thrown back and...

SATURDAY
splendour of the International Settlement in Shanghai. But his story begins when the Old blue eyes sings Japanese troops his heart out at The Point Theatre, Dublin.If march into the town and he's separated you are a Frank fan it from his parents. is a concert not to be Somehow Jim has to missed! find a way of fending for himself in a world where it's every THE BEST OF person for themselves. FRIENDS Channel 4 9pm FILM: HAIL, HAIL ROCK 'N' ROLL For over 30 years, a BBC2 10.15pm nun, a museum director and a writer exchanged A tribute to that affectionate letters pioneer of rock 'n' roll, which touched on all Chuck Berry, with a sorts of subjects from recording of the wild blasphemy to the finer man's 60th birthday points of tango concert, which took dancing. The three place in the historic friends were Dame Fox Theatre in Berry's Laurentia McLachlan, home town of St Sir Sydney Cockerell Louis. He performs all and George Bernard his classic hits and is Shaw, and this joined on stage by Channel 4 play some of the greatest explores the deep and names in rock and enduring friendship blues. which survived for so long. The AMNESTY INTERNATIONAL'S accomplished cast BIG 30 includes Sir John Gielgud as Cockerell, UTV 11pm Wendy Hiller as Dame Laurentia and Patrick This special concert McGoohan as Bernard was held to mark Shaw. Amnesty's 30th birthday, and features FILM: EMPIRE OF some of the biggest THE SUN names in the music BBC1 8pm business, who all gave their services free for Ambitious, sprawling the good cause. film, directed by Among the artists Steven Spielberg, appearing are Jason about the fortunes of Donovan, Dannii an 11 -year-old boy in Minogue, Tom Jones, wartime Japan. It's Roger Daltrey, Dave 1941, and Jim Graham Stewart and Lisa lives with his family in Stansfield, plus other the privileged special guests.

A WOMAN NAMED JACKIE RTE 10.15pm The famous Jackie O charms the world as its queen. But her reign is darkened by Kennedy's link with the beautiful but troubled Marilyn Monroe. Part two of the gripping threepart mini-series. JACKS AND THE BEANSTALK BBC1 4.15pm Children's TV favourites throw off their usual characters to take part in the annual pantomime show. This year they're joined by some other characters from the world of soap opera and comedy. John Altman (better known as nasty Nick Cotton from EastEnders) takes the role of Squire Hire and Neighbours star Anne Charleston plays, naturally enough, Madge the next-door neighbour. They join presenters Andi Peters and Simon Parkin, the Blue Peter team and many more.

Friday, BBC1 4.40 p.m. The Chronicles of Narnia "The Lion, the Witch and the Wardrobe" Three-part dramatisation of the stories of C S Lewis. The children arrive in Narnia to discover that Mr Tumnus is a prisoner of the White Witch. They set off immediately in search of Asian. (Part 2) (Repeat) (Ceefax) Saturday, Ulster 9.25 a.m. Motormouth The Motormouth team's Christmas guests include Ashly Paske, Kristian Schmidt and Ian Smith from Neighbours, Michaela Strachan, Andrew O'Connor and Carmen Silvera. The seasonal festivities also include music from Take That, a special episode of Mousetrap and cartoon fun with Beetlejuice and Scooby Doo. Saturday RTE 1 December 28, 9.25a.m. Around the World in 80 Days. The epic adventure of traveller Phileas Fogg is brought to life in vivid animation for everyone to enjoy.

Saturday, Ulster 12.30 p.m. Community Games National Finals 1991 Ray Darcy presents the second of two programmes from the National Community Games Finals from the Mosney Holiday Centre, Co Meath, contested by children from all over Ireland. Sunday, Ulster 9.25 a.m. Disney Club John, Andrea and Paul take a look at an ancient Native American condominium with all mod cons; go swimming with some sharks and meet a friendly polecat called Gus. And a band of junior bagpipers will be helping to pipe in the New Year. Tuesday RTE 1 December 31, 6.15p.m. Cartoon Time Cheeky Porky Pig stars in his own adventure Kitty Kornered. Meanwhile, the duck who drives everybody quackers - Daffy - comes to life in Wise
Quacking Duck.